The consumer memory industry has been teasing DDR4-5000 for a few months now.  We saw one company show some DDR4-5000 modules at Computex back in July 2019, running on an MSI MPG Z390I GAMING EDGE AC with an Intel Core i7-8086K processor, but the company said at the time that it didn’t make sense to release them because (at the time) only 2% of top-end CPUs could actually keep up with such a high memory speed. Fast forward to November a few key things have changed.

Micron’s new 8 Gbit Revision-E DDR4 chips (Rev.E or “Micron E-die”) first gained attention in April, and now they’ve matured through rigorous testing and qualification for the high-end memory kits. Enter the Corsair Vengeance LPX DDR4-5000 memory kits, which have been QVL'ed for use with MSI's high-end X570 models to give users blazing-fast memory for Ryzen 3000 processors.

AMD’s new Ryzen 3000 processors hit the market with a new memory controller capable of running extremely high speeds. It also helps that the CPU can now enable memory and Infinity Fabric ratios, which allow the fast memory to take advantage of the memory controller. Taking all of this into account, Corsair is now confident enough to be the first DRAM retailer to bring DDR4-5000 to market.

Behind the unassuming CMK16GX4M2Z5000C18 part number is a kit made with Micron 8 Gbit Revision E chips. Each of the chips have been individually tested for overclocking headroom, and are used with Corsair’s custom 8-layer PCB and cooled with anodized aluminium heat spreaders.  Corsair has stuck with the low-profile, non-RGB Vengeance LPX design and included its Vengeance Airflow fan to maximise cooling, but also to provide that unassuming look.

The Corsair Vengeance LPX DDR4-5000 memory kit is designed for high-end Ryzen 3000 processors equipped on X570 motherboards. At present, only specific MSI motherboard models, including the MEG X570 Godlike, the MEG X570 Ace, and the MEG X570 Unify have been officially validated (or 'QVL'ed') to work with this kit.

QVL stands for Qualified Vendor List. If a product is on this list, it means that the manufacturer has done testing to say that these two products should work together without issues. Anything not on list doesn't mean it won't work, but it hasn't been validated.

The DDR4-5000 memory comes with a single XMP 2.0 profile which is rated for 5000 MT/s, with latency timings of 18-26-26-46 and has an operating voltage of 1.50 V. The Corsair Vengeance LPX DDR4-5000 kit is formed by two 8 GB memory sticks. Corsair's Vengeance LPX heatsinks are technically low profile with a height of just 31 mm. This is great for cooler compatibility as these memory sticks will fit under most CPU air tower coolers. 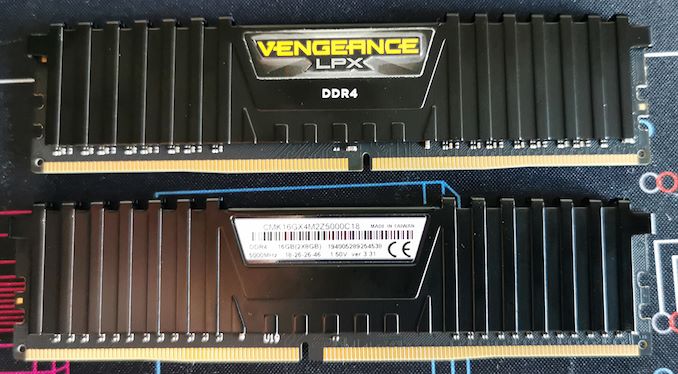 The stylings are consistent with the rest of its Vengeance LPX range, with anodised aluminium low profile heatsinks. Opting for a less aggressive heatsink design allows for better compatibility with larger air coolers. The black LPX heatsinks are 31 mm tall which should allow these to fit in with any system, and the black aluminium anodizing looks subtle enough to fit into most system configurations in terms of style. The Corsair Vengeance LPX range doesn't use integrated RGB LEDs and instead opts for a more clean-cut approach to its design. 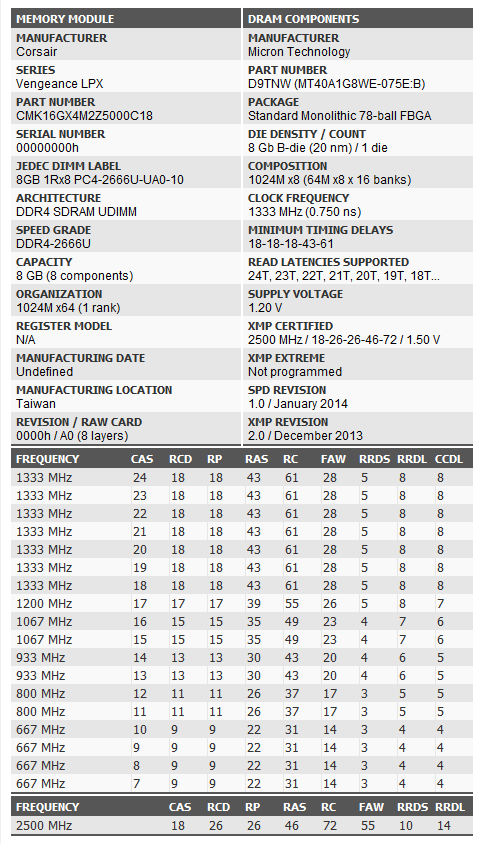 The Corsair Vengeance LPX DDR4-5000 kit is specifically using Micron ICs which they say are cherry-picked for maximum performance. This means Corsair is stating that it is essentially binning its memory ICs to guarantee they can deliver the 5000 MT/s speeds it advertises. With our probing above, it lists the kit using Micron B-Die, which would be somewhat spectacular. We confirmed with Corsair that these are E-die. Interestingly Corsair is using its 8-layer PCB design which is impressive and is likely a reason why it is capable of reaching DDR4-5000 in a low profile kit.

Over the next page, we go into some detail about the effect high speed memory has on Ryzen 3000 processors, but it's important to note that fast memory has had a checkered past.

Back in the days of DDR3, when systems would run DDR3-1333 as the rated memory, we saw plenty of potential uplift in performance moving to DDR3-1866, DDR3-2133, because at a fundamental level DDR3-1333 was horrifically slow. For anything compute limited, there was little difference, but for anything that touched the memory, it was heavily advised to get the fast memory. The biggest impact with fast memory was always integrated graphics, where memory bandwidth is always king.

For DDR4, we have seen a similar effect, but it has been relatively muted. Original DDR4 systems were released with DDR4-2133 support, but over time the latest hardware now supports DDR4-2666, DDR4-2933, or DDR4-3200 as standard.

AMD has been at the forefront of this, with the ability to rate their memory controllers at very fast standards. This means that a jump from DDR4-3200 to DDR4-3600, through buying fast memory, isn't as much of a jump as 400 MT/s used to be. 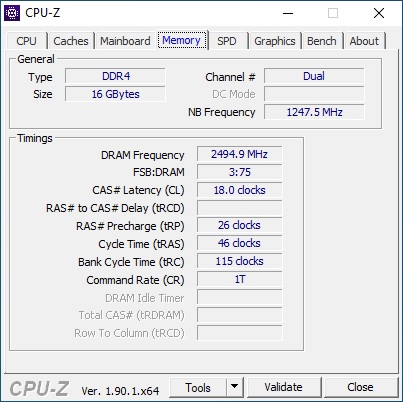 For Ryzen 3000, the effect is compounded. AMD showcased its memory suggestions when the product was launched, showing that DDR4-3600 is a sweet spot, because the memory frequency and infinity fabric frequency, which manages data inside the processor, were synchronized. Going above DDR4-3600 (or to DDR4-3733) would cause the infinity fabric to be derated by half, effectively making it 1800 MT/s. There were still benefits to this, although they would require super-fast memory in order to realise them. We'll cover more detail about the infinity fabric on the next page. 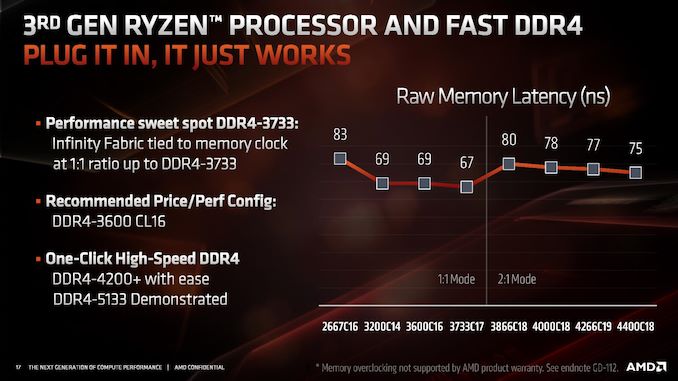 With DDR4-5000, the de-rated infinity fabric runs at 2500 MT/s, which is a lot nearer to the default running speed than most. Of course, there are still benefits running the DRAM this fast, so those are not discounted. The downside, however, is that traditionally the best recipient of fast memory has been integrated graphics. The Ryzen 3000 desktop CPUs built on Zen 2 do not have any model with integrated graphics. Not only that, but users with integrated graphics are unlikely to spend buckets of money on super-fast memory. It makes testing it in real-world a little tricky.

For our part, we subjected the memory to a range of our workstation tests, where memory can be important. We decided to test this memory in three ways: AMD's supported maximum (DDR4-3200), as near as to AMD's recommended overclock (DDR4-3600) as is comfortable on almost every CPU, and the speed of this kit (DDR4-5000), all at the same latencies as the XMP profile of the kit (C18). As with other memory reviews, there are going to be a number of benchmarks which show no difference, however as much as this memory kit is going to be rare, the effects of the high speed are in-of themselves niche. The following pages of benchmarks will show this.