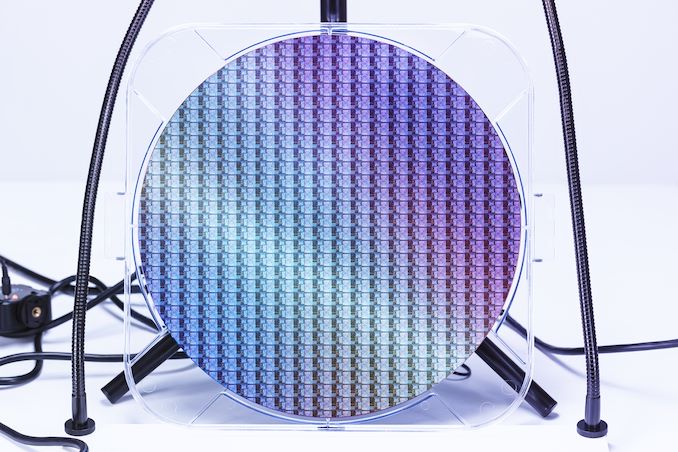 Among several different updates tucked into Intel’s Q2’2020 earnings report, the company included a brief update on some of their future products. While the bulk of the company’s focus is currently on their next-generation Tiger Lake CPUs, which are launching this quarter, the company is also looking at what comes after Tiger Lake, as well as the future of their highly profitable server business.

First off, Alder Lake has finally been formally outed. The successor to Tiger Lake now has an official launch window of the second-half of 2021. The 10nm chip will be for both mobile and desktops, making it the first 10nm chip that Intel has confirmed will come to desktops. Very little is otherwise officially known about the chip, but Intel’s ISA documents have previously revealed that there will be some new instructions found in that chip.

Otherwise the six-month window for kicking off production shipments is a fairly wide one for a chip that doesn’t rely on a new process node. Intel product cycles are rarely under a year long, so at first blush we’d be surprised if this was anything earlier than a late 2021 product. But with Intel’s recent 7nm delay and planned ramp-up of their 10nm process, it may be that Intel will be trying to pull it in and launch it in Q3, similar to this year’s Tiger Lake launch. 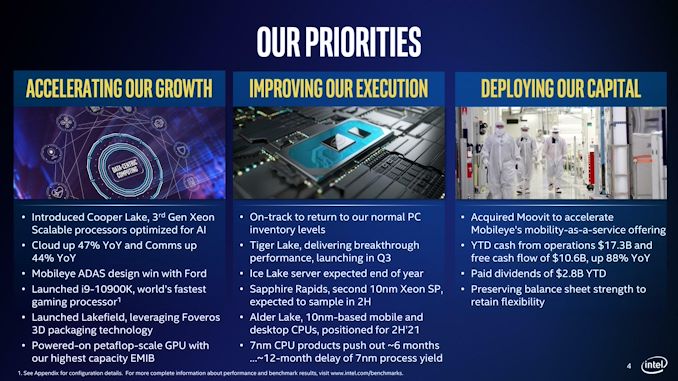 Meanwhile on the server side of matters, Intel is preparing for both Ice Lake-SP as well as its successor, Sapphire Rapids. One of the many victims of Intel’s 10nm woes, Ice Lake-SP is Intel’s first 10nm server chip. As of late the company has been riding a wave of profitability based on its server parts, so a newer part that improves on core counts and energy efficiency will be a welcomed addition to Intel’s product lineup, not to mention better able to fend off AMD’s powerful EPYC “Rome” processors.

Initial production shipments for Ice Lake-SP are set to start by the end of this year. Though Intel’s language is loose enough that this may mean that larger volumes of the chip may not ship until 2021.

Sapphire Rapids will follow Ice Lake-SP by roughly a year. According to Intel’s presentation deck, chips will begin sampling in H2’2020, while CEO Bob Swan’s prepared remarks state that initial production shipments will begin at that time.

What follows these chips, in turn, will be the big question that Intel is currently wangling with in light of their 7nm delay. The company has made it clear that they intend to maintain an annual release cadence, divorced from their process roadmap if necessary. Depending on the state of their 7nm process, that may mean 7nm chips, 10nm chips, chips using dies from both processes, or even using dies from third-party fabs. Intel has opened the door to all possibilities, and their 2022 chips will likely be their first chance to embrace their new pragmatic approach.