It has been a year since AMD launched its previous generation Ryzen Mobile processors. At the time, the update from Zen to Zen 2, as well as moving to TSMC’s 7nm manufacturing process, gave the company the biggest boost in its notebook performance and battery life in AMD’s history. It’s difficult to reinvent the wheel again, but AMD is hoping that its new Ryzen 5000 Mobile processors build on the momentum that started last year. The new processor line-up has 13 new models, targeting the traditional U series and H series markets, as well as a couple of new areas AMD is looking to expand into.

For those familiar with the previous generation of Ryzen 4000 Mobile, then the situation for these new processors is relatively simple: replace the Zen 2 cores with Zen 3 cores, combine the L3 cache, double the L3 cache, and that’s about it. 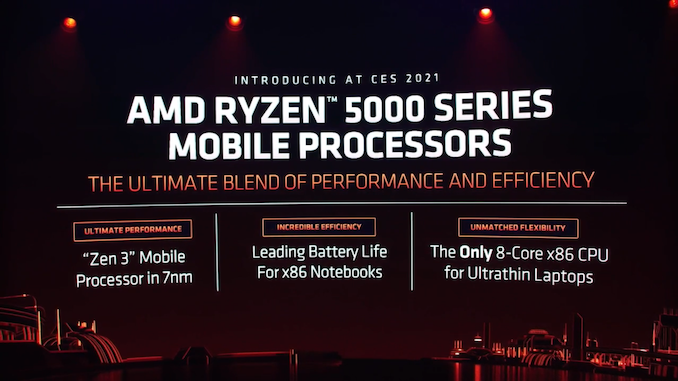 For everyone else, what we have here is a single piece of silicon that contains one group of eight Zen 3 cores that share a single 16 MB non-inclusive L3 cache. AMD’s big marketing tool for the other Zen 3 families on the desktop is that the size of the L3 cache effectively reduces main memory latency and helps gaming performance, and so with the new mobile processor they’ve combined the two four-core complexes into a single eight-core complex, then doubled the amount of cache, enabling each processor to have access to all the cache on the CPU at the same time.

These cache updates work in line with core updates that the Zen 3 core microarchitecture provides. We’ve covered the Zen 3 microarchitecture in our desktop processor review, which you can read here. Just replace the L3 cache numbers with 16 MB to get a sense of what the mobile processors will have.

For graphics, there are no updates moving from Ryzen 4000 to Ryzen 5000, and we still have eight compute units of Vega-era design. This will be a bit of a frustration for a few users that may have been hoping for some RDNA2 level updates to push performance along, especially with the added efficiency and performance gains that an RDNA2 design should have possibly brought to the table. The simple matter here is that when AMD put Vega on its Ryzen 4000 Mobile in 7nm, the efficiency was increased enough that enabled sustained development and kept AMD on cadence for its next generation. We’re at a stage now where AMD might consider updating the CPU/GPU on its APUs in alternate years, if that keeps the rate of product releases in line with its other designs. 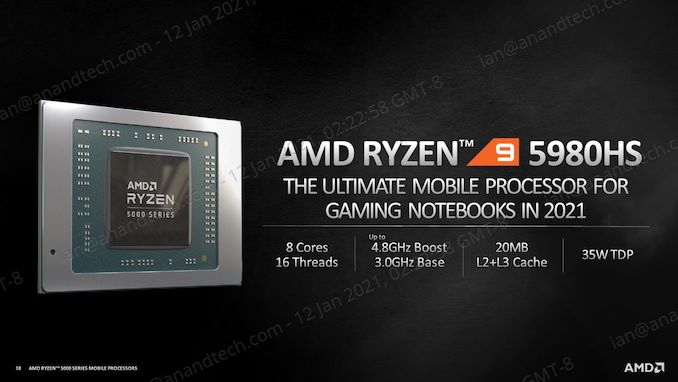 For additional connectivity, we expect the Ryzen 5000 Mobile processors to also keep the same as the previous generation: eight lanes of PCIe 3.0, support for NVMe and SATA, and DDR4-3200 / LPDDR4X-4266. Again, leveraging the previous generation design helps AMD’s generational time-to-market (something that AMD has been saying it needs to keep track to), but we do perhaps expect updates next time around.

While we don’t have a Ryzen 5000 Mobile silicon die on hand (something we lose by not having a physical CES event this year, but totally understandable), because the Zen 3 cores are slightly larger than the Zen 2 cores, overall the die size of Ryzen 5000 Mobile should be slightly bigger. This should not have much of an effect on designs, depending on how the packages arrange their pin-out design. Given the similarities, it is possible for the pin-out to be identical to the previous generation.

All of AMD’s Ryzen 5000 Mobile processors (3 exceptions, listed below) are binned from this one silicon die design.

AMD’s top tier mobile parts are all in the H-series. Traditionally these processors are listed with a TDP of 45 W, however last year we saw AMD experimenting with a newer 35 W category called ‘HS’. This year AMD is again introducing a new level called ‘HX’ for its overclocking models, going above the standard H-series TDP.

These two series, HS and HX, represent different strategies for AMD. Last year when HS was introduced, AMD stated that these 35 W models were special, requiring system design approval from AMD in order to have access to them, as they enabled the same base and turbo frequencies but at a much better efficiency point. This year that distinction seems to have dropped away a bit, with the HS models now simply giving the same turbo but lower base frequency than the standard H. Note that the change in TDP, from 45 W to 35 W, in the various TDP modes, typically relates to changes in base frequency, so in that instance AMD is more aligned with what the market is used to.

For HX, this changes AMD’s offering. Overclockable models in laptops isn’t necessarily new (Intel has done it for years), but AMD has taken the detail to explain that the TDP is raised to a ‘45W+’ design for these parts. This allows the OEM partners to ultimately define their TDP level, and have the sustained base frequency increased match expectations for the hardware it is built for. This means that desktop-replacement devices can fully turbo up to 65 W (or higher?) as needed, rather than those OEMs having to reply on building a socketed platform in a portable chassis. 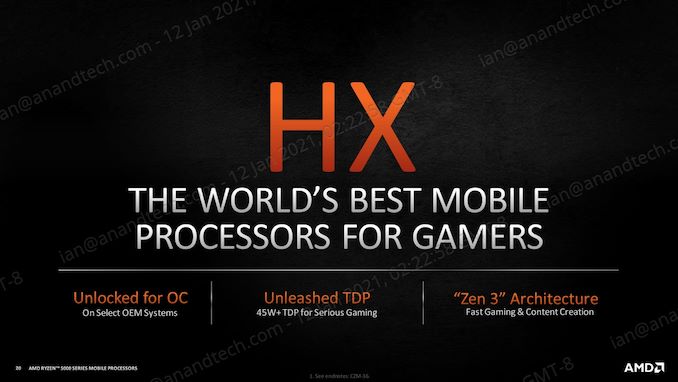 Users might also note that the Ryzen 9 processors here do not have traditional H series parts. Because the mobile market is always a bit odd in its numbering scheme, the Ryzen 7 5800H takes that role, because it still has eight cores. If OEMs want the Ryzen 9 branding, they either have to build something sleeker for a 35W HS, or something beefier for the 45W+ HX.

The U-series portfolio is where AMD’s processor cycle updates cause a bit of bother. In a normal product cycle, we expect everything to be upgraded from the older to the newer, however this time around AMD is mixing and matching the U-series 15 W products between Zen 2 and Zen 3. So while there are new Zen 3 hardware options at 15 W, some of these processors are simply re-badges of Ryzen 4000 Mobile instead.

Reasons for offering a re-badge can be confusing. Normally it is done to appease OEM partners that have a singular design and want to get the benefit of the latest generation nomenclature but not have the expense of developing a new unit. AMD’s public reasoning here has not been given, although in the past we’ve seen it beholden to its OEM partners (Carrizo and Carrizo-L) for this sort of co-design.

Despite this, AMD is promoting the Ryzen 7 5800U as its most efficient mobile processor to date, citing 21.4 hours battery life on a 53 Wh battery during 1080p video playback with Wi-Fi on, or 17.5 hours in MobileMark 2018’s battery life test. The footnotes state this was an AMD reference platform, though details on screen brightness were not given. 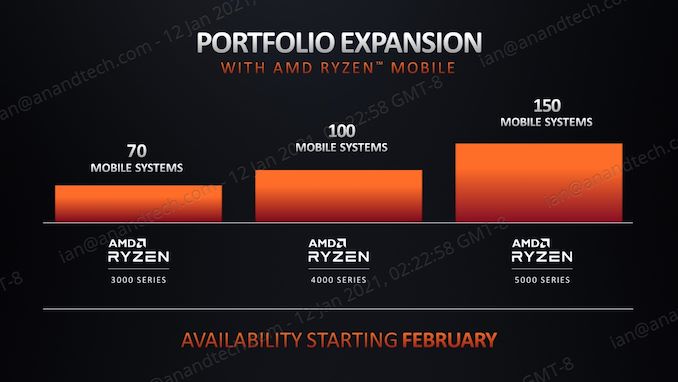 Overall, AMD is citing that they will have 150+ design wins this year for Ryzen 5000 Mobile, compared to 100+ for Ryzen 4000 Mobile. Availability for these systems, both the U-series and H-series, should start this February.