Going from its Z490 firmware to the latest Z590 firmware, ASRock hasn't made any noticeable changes to the user interface. This isn't a negative as ASRock's Taichi UEFI firmware is aesthetically pleasing, with a subtle black background with ASRock's cogwheel motifs. The GUI includes yellow primary menu text, with white variable text, a grey highlight when each variable is selected or hovered over to denote what is currently selected. 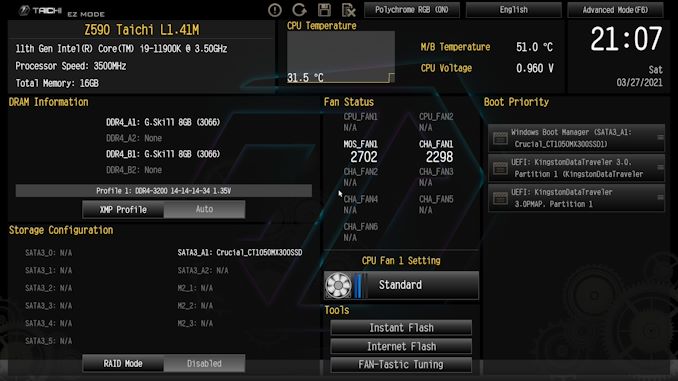 The ASRock Taichi firmware has two primary modes in which users can make changes, basic and advanced. The basic section includes relevant information about the CPU, DRAM, fan status, and boot priority. A  CPU temperature graph t that monitors how hot the CPU is running sits along the top, with an option below it to select between different CPU Fan settings. Users can also access more intricate functions, including Instant Flash, to update the board's firmware and an option to flash the firmware over the internet. The FAN-Tastic tuning section allows users to customize fan profiles via pre-defined presets or manually adjust fan curves for each of the board's eight 4-pin headers. 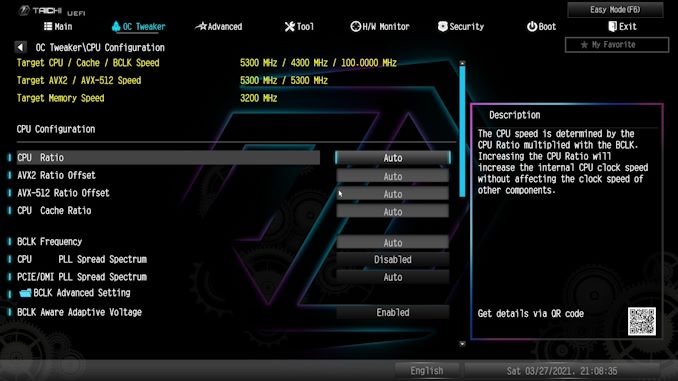 Pressing the F6 key will cycle between the basic and advanced modes, and while the basic mode offers what it says on the tin, the advanced mode is where all of the board's customizable settings are located. The main menus, which are located along the top, include the OC Tweaker, the Advanced section, a Tool menu, an integrated H/W Monitor, Security options, Boot menu customizer, and the Exit menu. The OC Tweaker is where all of the board's power-related and overclocking settings are located. With new refinements to Intel's 14 nm ported Rocket Lake processors, including VF Curve adjustment, as well as new memory controller ratio settings. Users can also overclock the memory and make voltage adjustments, with the CPU, memory, and voltage settings featuring their own individual menus.

Other notable elements within the ASRock Z590 Taichi firmware include the Polychrome RGB tool, allowing users to customize the board's integrated RGB LEDs. However, the included ASRock Polychrome RGB software offers much better customization options. The Tool I/O Cover Gear Rotating option allows users to customize the mechanical stepping cogwheel built into the rear panel cover, a nice aesthetic feature. Overall the ASRock Z590 Taichi firmware is responsive and stable. However, we experienced a couple of memory-related issues on an earlier firmware version, which we hope will be rectified going forward.

Included with the ASRock Z590 Taichi is a basic yet highly functional set of software and applications. The most prominent of these is the ASRock A-Tuning software. Also included is ASRock's Polychrome RGB, where users can customize the look of the system and components such as graphics cards, peripherals, and RGB memory. The ASRock Live Update & App Store software allows users to update the board's drivers and software, although it is plagued with gambling app downloads which we aren't particularly keen on seeing. 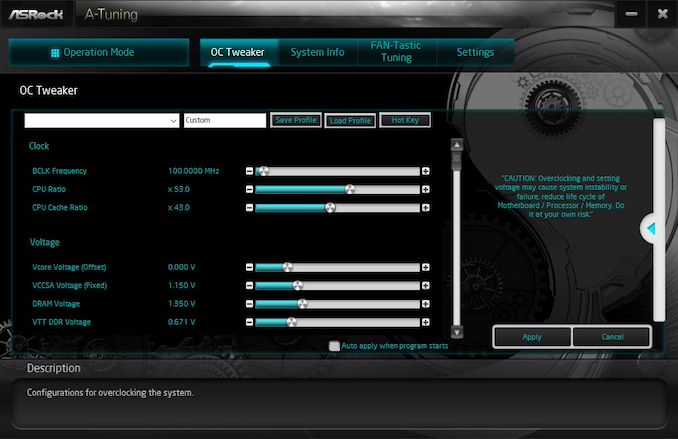 The ASRock A-Tuning software allows users to overclock the CPU and the base clock (BCLK) frequency. It includes various customizable voltage options, including DRAM voltage adjustment, although the software doesn't allow alterations to the memory frequency or latency timings. The A-Tuning software also includes the ASRock FAN-Tastic Tuning utility, allowing users to customize the fan curve profiles for each of the board's eight 4-pin headers. The System Info section displays a list of current and real-time frequencies, voltages, and fan speeds using its own integrated sensors to provide data.

Other software suite applications include the ASRock XFast LAN utility, which allows users to monitor internet traffic bandwidth, create online budgets, and provide comparative ping statistics. Taking care of the audio software, ASRock uses the Nahimic 3 software, which provides multiple functionalities, including preset profiles based on different auditory scenarios such as music, movies, and gaming, with a digital static suppressor for microphones that pick up a lot of background noise. The ASRock Restart to UEFI software allows users to enter the board's firmware at the click of a button.