The MSI MEG Z590 Ace is using its Click BIOS 5 UEFI firmware which we've seen many times before in previous reviews. Focusing on the GUI, it uses a black background, with red accents and white text, with red highlighting to signify which option is currently selected. The firmware itself has two modes for users to select between, a 'basic' mode and an 'advanced' mode designed for experienced users. 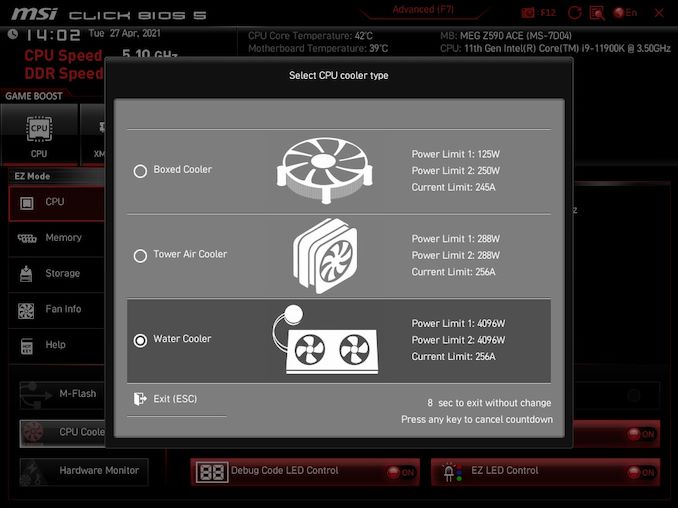 Upon entering the firmware during system POST which can be done by pressing the F2 or Del key, the first time this is done or when the CMOS has been reset, users can select which method of cooling they are using. This is a handy feature which until now, has previously been a mainstay of ASUS ROG models. Due to Intel's various methods of obtaining extra performance, including Thermal Velocity Boost (TVB), it lets the firmware know what type of cooling users have installed on the CPU. For users with water cooling or premium AIO CPU coolers installed, this will unlock power limitations on the board for more aggressive turbo clock speeds, while users with air coolers will find things will be limited to just 288 W, on both the Intel PL1 and PL2 power limits. Selecting the 'Boxed Cooler' option will revert power limitations to Intel specification, including 125 W for the PL1, and 250 W for the PL2 power limits. 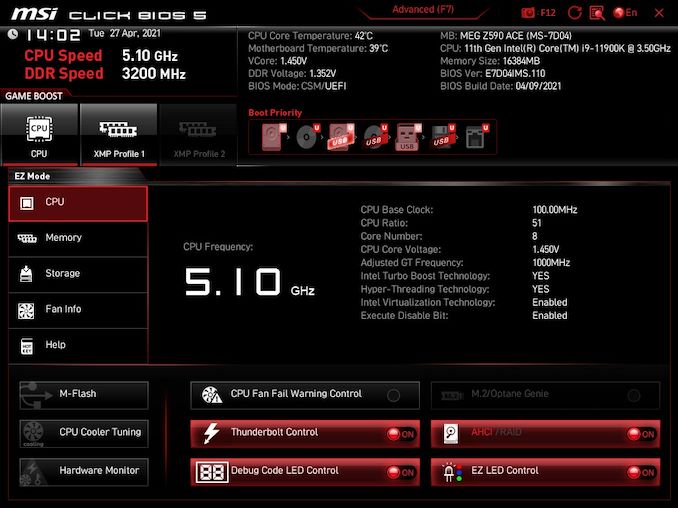 After selecting the cooling method, the Basic mode gives users a basic, yet informative view of the BIOS. Users can see information about the installed processor, memory, and storage, as well as current fan speeds. Along the top, users can drag and drop the desired boot priority which is handy if users have multiple drives with different operating installs, while there are also tabs for flashing the BIOS firmware, an integrated hardware monitor which allows access to the integrated fan curve profiles and presents. For users who select the wrong cooling setting, this can be changed by selecting the CPU Cooler Tuning option and making a different selection. Along the bottom, users can turn off the Thunderbolt 4 controller, enable Debug LED control, as well as enable RAID and turn off the board's integrated RGB LEDs. 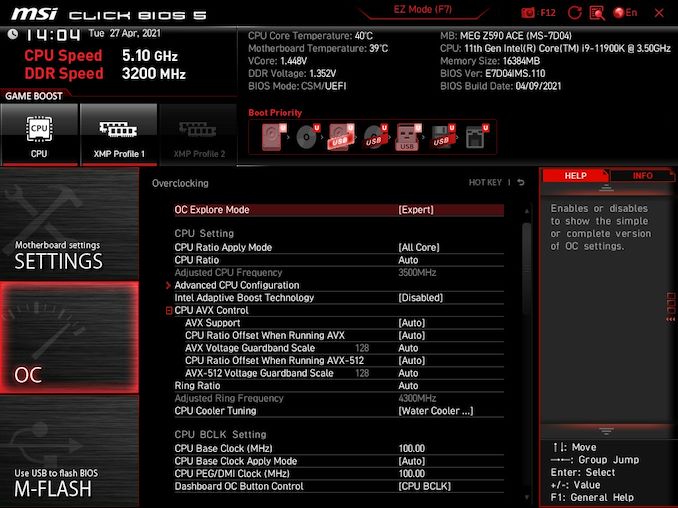 Users can flick between the Basic and Advanced modes by pressing the F7 key, although the Advanced mode does offer much more customization of the board's firmware settings. Within the advanced mode, users can navigate around the heart of the BIOS, with plenty of options for storage, power management, and chipset-related settings. The Advanced mode also allows users to overclock the CPU and memory, and if required, the Intel UHD integrated graphics. With the MSI MEG Z590 Ace being an enthusiast-level board, there are lots of settings for overclocking the CPU, that including frequency, cache, and power options that can be customized. The Ace also has an LN2 mode for extreme overclockers who plan to use LN2 or DICE sub-ambient cooling methods. For memory, there are options for enabling or disabling XMP profiles on memory that are compatible, as well as an extensive selection of primary, secondary, and tertiary latencies that can be tweaked and customized. Users can also change advanced power settings such as power limits, and the board's load-line calibration (LLC) settings which can improve stability when performance higher frequency overclocks on the CPU.

Overall, the MSI Click BIOS 5 firmware is consistent with other MSI models we've tested which are using it. It's responsive to USB keyboard and mice, and it's easy to navigate around. The basic and advanced modes cater to users with different experience levels, which is commonplace with consumer desktop motherboards in this day and age.

Looking at the software package supplied with the MSI MEG Z590 Ace, everything outside of its Nahimic audio software revolves around the MSI Center application. Not only does the MSI Center act as a central hub for all of the different software functions that MSI provides, but it is the plexus in which all of the customizations such as its Mystic Light RGB software and Live Update tool, are rolled into one. Other elements of software include support for the aforementioned Nahimic audio software, and a custom skinned version of CPU-Z which is based on MSI's red and black Gaming branding. 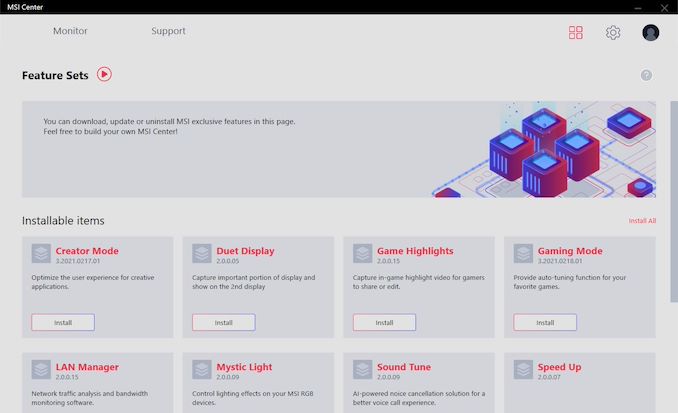 Within the MSI Center, it includes all the functionality that its previous individual applications could do, with the exception of overclocking. Users looking to overclock the processor within Windows can download the Intel Extreme Tuning Utility (XTU). Some of the functionality of the MSI Center application includes the Creator mode where users can use MSI's AI (assisted intelligence) Engine to determine which software needs prioritizing resource-wise, while the Gaming Mode allows users to optimize and auto-tune functions for specific titles. There's also a LAN manager which is essentially a basic traffic shaping utility, with Mystic Light allowing users to customize the integrated and externally attached RGB LEDs, and sync them with some cool lighting effects.

Other utilities in the MSI Center include a basic hardware monitor, a system information panel, and the Live Update utility which allows users to update to the latest drivers. It also True Color for altering the color, brightness, and contrast in Windows without needing to touch monitor settings, and includes profiles for EyeRest, Gaming, Movies, and also allows for customization profiles to be created.

Overall the MSI Center removes a lot of bloat from its software bundle and piles it all into one. The only negative is that there's no overclocking functionality which we have seen from its previous Dragon Center software.