Despite the price and the market for this memory kit, G.Skill still has price competitive challengers. At the time of writing, here was the state of Newegg, starting with the 2600+ 4x4GB kits, then the 2600+ 2x4GB kits, and finally the 4x4 GB kits in the same price range of the kit being tested today.

As we can see, the more you ramp up the MHz numbers, the price of the kit rises exponentially at this end of the market.  There are lots of crazy numbers in that list, for minute increases in daily performance.  In the 2x4 GB space at that price range, the Corsair Dominator package at $160 seems to offer the same speed but at a cheaper price (overclocking not compared).  Going down to the 4x4 GB range and we see a set of 2400 C10/C11 modules offering almost the same performance and double the amount of memory at the same price.

A quick look at all the 2x4 GB kits available on Newegg gives the following table:

With our overview of the ASUS Republic of Gamers range of products, one piece of software caught my eye while I was testing.  The ASUS MemTweakIt allows for almost complete control of the memory subtimings while in the OS, such that users can optimize their settings for memory reads, memory writes, or for pushing the boundaries.  The upshot of this software in our context is that it takes all the sub-timings and settings and condenses them into a score.  As the memory kits we test contain XMP profiles, these profiles determine a large majority of the sub-timings on the kit and how aggressive a memory manufacturer is.  We should see this represented in our MemTweakIt score.

As we do not know the formula by which ASUS calculates this value, it has to be taken with a pinch of salt.  It could be weighted in favor of one of the settings versus the other.  Normally I would not put such an non-descript benchmark as part of our testing suite, but the MemTweakIt software does give us one descriptor – it gives us a theoretical rate of improvement across the range of kits we test, and allows us to order them in the way they should perform.  With this being said, the results for our kits are as follows: 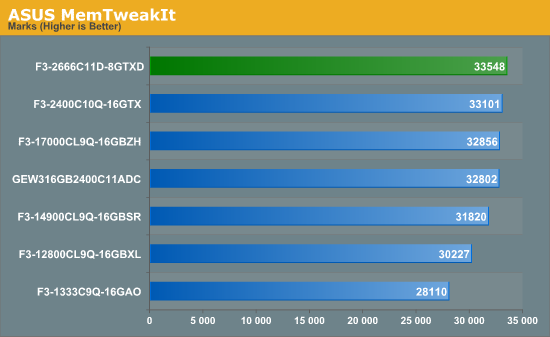 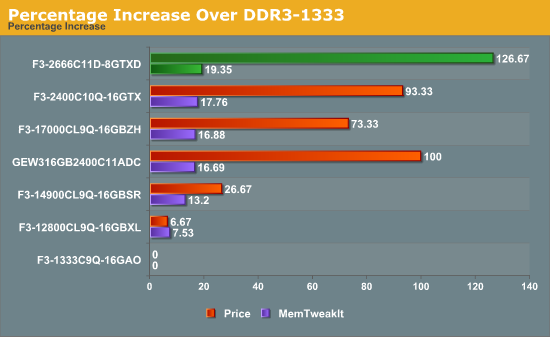 Compared to our previous kits tested, we were under no illusion that a 2666C11 kit would take top spot.  But what this also means is that MemTweakIt does not differentiate between one memory stick per channel or two – it should however differentiate between single and dual channel orientations.  Note that according to the scores, we have ~20% increase in MemTweakIt score over a 4x4GB 1333 C9 kit for a whopping 127% increase in price (as well as half the capacity).