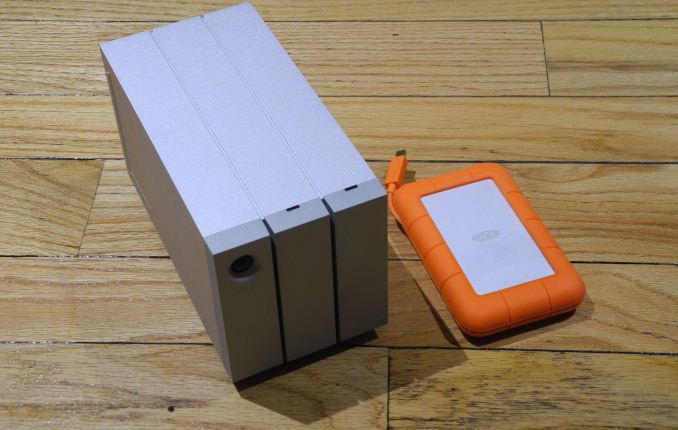 Consumers dealing with multimedia workflows need to transfer large amounts of data around. Be it collecting data in the field or editing media at a workstation, the necessity for fast and accessible direct attached storage (DAS) units can't be stressed enough. LaCie and G-Technology are two vendors targeting this space. Back in April, we had covered the launch of some solutions in this space. Today, we are reviewing one of LaCie's introductions, the 2big Thunderbolt 2. LaCie's Rugged Thunderbolt bus-powered DAS forms a complementary offering for in-field use. Both units offer Thunderbolt as well as USB 3.0 connectivity.

The 2big Thunderbolt 2 is meant for use on the desktop and needs an external power adapter, while the Rugged Thunderbolt comes with a protective covering that enables a IP-54 rating for ruggedness. This ingress protection rating implies that the unit is dust proof and can also withstand water splashes. Our review unit was the 500 GB SSD version, which can also withstand vibrations and shocks. The detailed specification of the two review units are provided in the tables below.

The gallery below shows some of the internal components of the 2big Thunderbolt 2.

Our 12 TB review unit came with two 6 TB Seagate ST6000DX000 Desktop HDDs inside. These retail for around $300 each, and have six platters spinning at 7200 rpm internally. On the board side of things, the Thunderbolt 2 controller is a well-known entity at this point of time, and doesn't appear in the gallery above. Fulfilling the hardware RAID functionality is the ASMedia ASM1092R chip which has two device ports and one host SATA port. The SATA to USB 3.0 functionality is handled by the ASMedia ASM1053E SATA - USB 3.0. We also seem to have a ASMedia ASM1156 chip on the board for which no public documentation exists yet. Our educated guess is that it performs the necessary SATA / PCIe bridging in order to bring the Thunderbolt 2 DL5520 controller into play.

The Rugged Thunderbolt was subject to a much less invasive teardown.

We found a Samsung PM851 2.5" SATA SSD inside. Ideally, to take full advantage of Thunderbolt speeds, it would have been nice to have a PCIe SSD inside, but that premium market is served by the LaCie Little Big Disk. Given the bus-powered nature and the cost, it is not a surprising to find the PM851 inside.the unit.