This time last year we saw the launch of Radeon Crimson. This was AMD’s big attempt to state that a yearly cadence for software features was a good thing, and helped streamline the process for the number of initiatives that AMD participates in when it comes to GPUs. This year the update is called ‘Crimson ReLive’, and features a number of updates such as integrating the professional aspect of Radeon Pro into the cadence, a push towards VR features, and additional elements to gamers/streamers and even screen recording for professional software.

As was made clear during various presentations during 2016, AMD’s driver and software teams have been shaken up and put on a quest to improve the user experience. This has been explicitly stated as more quality assurance, no fixed update schedule (fixes are published when they are ready) and a new push to ensure game-ready drivers are good-to-go when the game is launched. As a result we were promised more beta driver releases and a half-dozen WHQL releases during the year to ensure that steady stream. (The WHQL process takes time and doesn’t take into account game-specific issues, but offers a certified set of collected updates which can be required in certain environments.) 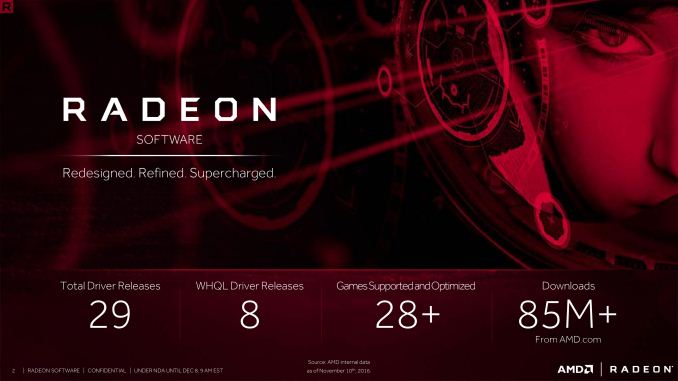 Users were promised six WHQL updates in 2016, and so far there have been eight. There have been a total of 29 driver releases (which makes 21 betas / hotfixes) with 28 new games supported and optimized, most of which were supported on day one. AMD has stated that this resulted in a user satisfaction rating (as rated through their metrics) of 9/10, and have been key to promote that the newer Crimson style of doing things is a stark contrast to the perception of AMD driver tools and software of generations past.

Back at the launch of Radeon Crimson in 2015, we saw the launch of a streamlined interface taking over from Catalyst Control Center, the introduction of Frame Pacing, Liquid VR integration (which was expected given the launch of VIVE/Oculus in 2016), shader caching, custom resolution support, FreeSync improvements, FrameRate Target Control  (FRTC), Game Profiles, improved Eyefinity support and a new driver branch for performance. Ryan and Daniel wrote about this last year, and it’s still worth a read for users that do not recognize any of the terms in that list (some of which will be used in this piece).

For the 2016 update, Crimson ReLive, AMD has focused the updates into three key areas: Consumer, Developer and Professional. These are not hard-and-fast divisions, given that features for one market may also be used for another. However package-level updates typically fall into two areas: bug fixes and new tools. 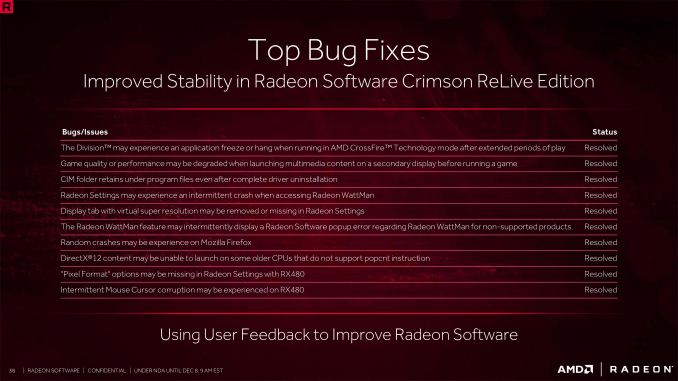 AMD is keen to promote that for 2016, due to the immediate driver release methodology, the driver program can be on top of more bug-fixes and they're released as required. Part of this comes through the additional level of automated quality assurance but also an increased level of real-world/end-user test procedures as well as rigorous VR testing. AMD is aiming that the increased testing and focus on launch-day drivers that are right first time will give optimum performance. If there are updates to come, this way of testing also allows performance updates to be rolled out quicker, which AMD has tested compared to the RX 480 launch drivers. It was stated that the days of 40%+ performance increases due to drivers is set to disappear in part due to this refocused effort to get it right on day one. 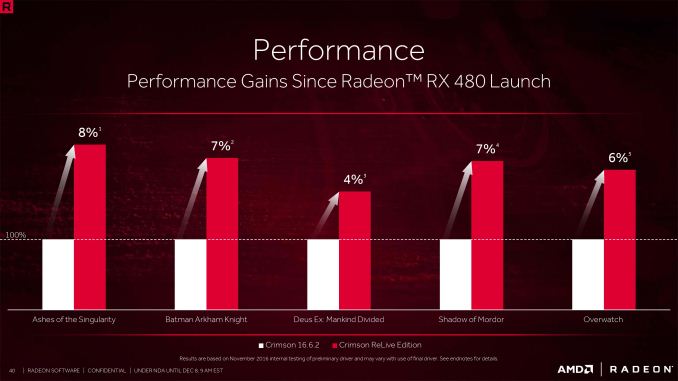 Before we get into the meat of the launch, a side note about Linux. The new launch will extend driver support to all AMD discrete graphics cards that are based on GCN architecture (so from AMD HD 7000-series and newer) but also gives Linux official FreeSync 1.0 support. 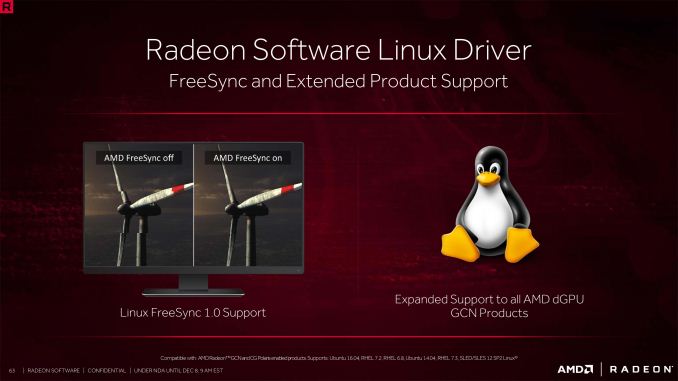