Not all motherboards are created equal. On the face of it, they should all perform the same and differ only in the functionality they provide - however, this is not the case. The obvious pointers are power consumption, but also the ability for the manufacturer to optimize USB speed, audio quality (based on audio codec), POST time and latency. This can come down to manufacturing process and prowess, so these are tested.

Power consumption was tested on the system while in a single ASUS GTX 980 GPU configuration with a wall meter connected to the Thermaltake 1200W power supply. This power supply has ~75% efficiency > 50W, and 90%+ efficiency at 250W, suitable for both idle and multi-GPU loading. This method of power reading allows us to compare the power management of the UEFI and the board to supply components with power under load, and includes typical PSU losses due to efficiency. These are the real world values that consumers may expect from a typical system (minus the monitor) using this motherboard.

While this method for power measurement may not be ideal, and you feel these numbers are not representative due to the high wattage power supply being used (we use the same PSU to remain consistent over a series of reviews, and the fact that some boards on our test bed get tested with three or four high powered GPUs), the important point to take away is the relationship between the numbers. These boards are all under the same conditions, and thus the differences between them should be easy to spot. 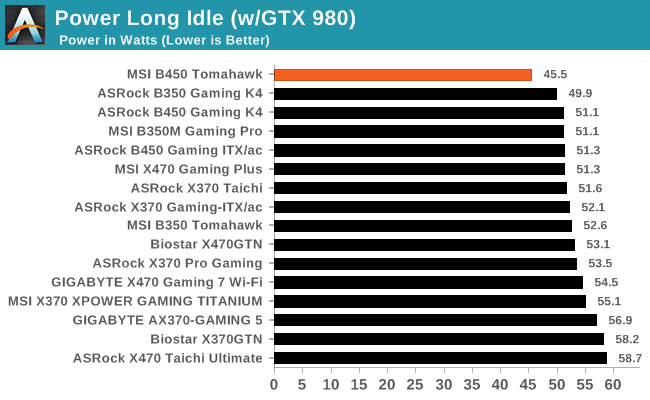 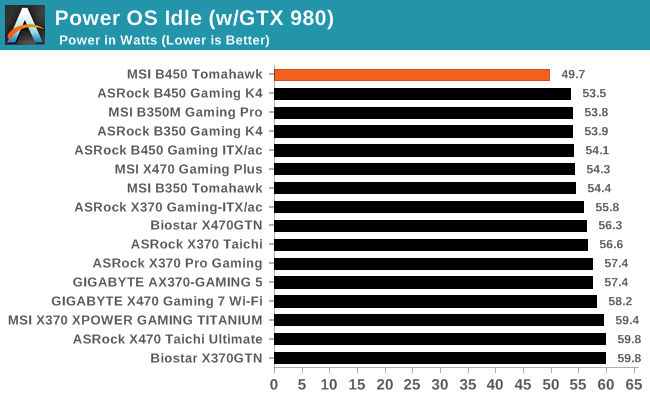 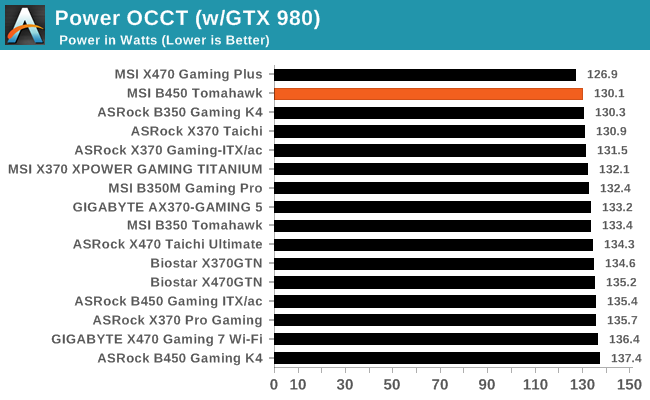 While it wasn't as apparent in our ASRock B450 Gaming ITX/ac and B450 Gaming K4 motherboard reviews, the newer B450 chipset has an idle power draw of only 2 W which really shows in the testing of the B450 Tomahawk. Even at full load the B450 Tomahawk performs well in regards to power consumption and like the X470 Gaming Plus, currently reigns supreme albeit marginally over the ASRock B350 Gaming K4.

Different motherboards have different POST sequences before an operating system is initialized. A lot of this is dependent on the board itself, and POST boot time is determined by the controllers on board (and the sequence of how those extras are organized). As part of our testing, we look at the POST Boot Time using a stopwatch. This is the time from pressing the ON button on the computer to when Windows starts loading. (We discount Windows loading as it is highly variable given Windows specific features.) 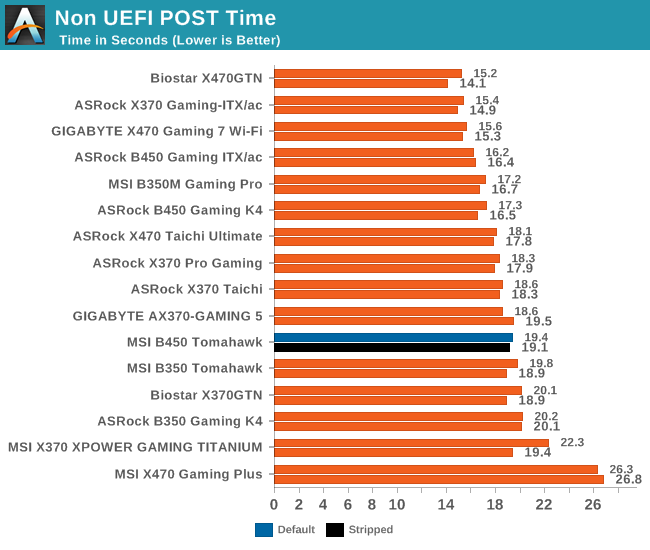 Having tested five MSI AM4 models so far and even an X399 (MEG X399 Creation) model, the consensus so far is that MSI boards have very erratic booting times. Some perform decently, such as the MSI B350 Gaming Pro, and others like the MSI X470 Gaming Plus have much longer POSTing times. The B450 Tomahawk as it stands performs averagely and offers the same sort of performance as the board it replaces.

Rightmark:AA indicates how well the sound system is built and isolated from electrical interference (either internally or externally). For this test we connect the Line Out to the Line In using a short six inch 3.5mm to 3.5mm high-quality jack, turn the OS speaker volume to 100%, and run the Rightmark default test suite at 192 kHz, 24-bit. The OS is tuned to 192 kHz/24-bit input and output, and the Line-In volume is adjusted until we have the best RMAA value in the mini-pretest. We look specifically at the Dynamic Range of the audio codec used on the rear panel of the board. 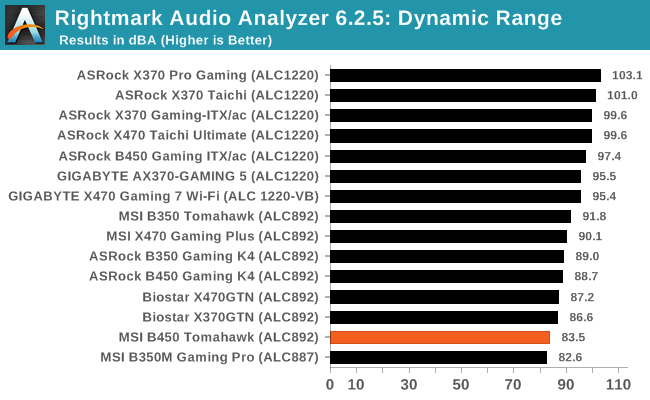 As it was previously stated in the visual inspection, one of the negative differentials between the first and second generation AM4 B350/B450 Tomahawk models is the audio area of the PCB. MSI has clearly done away with over half of the Nippon Chemicon gold audio capacitors and whether that's had a detrimental effect or not on the B450 Tomahawk, our testing shows that the B450 Tomahawk performs the worst out of all the Realtek ALC892 equipped boards thus far.

Deferred Procedure Call latency is a way in which Windows handles interrupt servicing. In order to wait for a processor to acknowledge the request, the system will queue all interrupt requests by priority. Critical interrupts will be handled as soon as possible, whereas lesser priority requests such as audio will be further down the line. If the audio device requires data, it will have to wait until the request is processed before the buffer is filled.

If the device drivers of higher priority components in a system are poorly implemented, this can cause delays in request scheduling and process time. This can lead to an empty audio buffer and characteristic audible pauses, pops and clicks. The DPC latency checker measures how much time is taken processing DPCs from driver invocation. The lower the value will result in better audio transfer at smaller buffer sizes. Results are measured in microseconds. 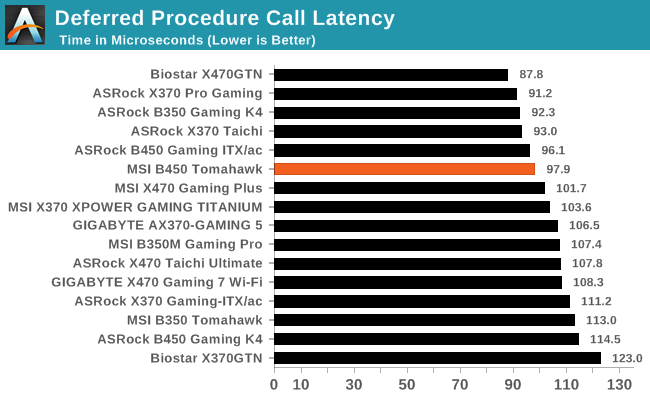 As with all of the AM4 motherboards tested so far, none of them has been super optimized for DPC latency and the B450 Tomahawk is no different in this regard. It still puts in a respectful showing, scoring a smidge under 100 microseconds.