The B450 Tomahawk is an ATX sized motherboard which comes from MSI’s Arsenal Gaming range with a heavy focus on value. The board does not have an overburdened PCB, which gives the black and grey color more pop.  The patterning across the board resembles a circuit board (of sorts) and the light gunmetal grey MOSFET/chipset heatsinks offer a sense of uniformity to the design. The B450 Tomahawk includes a single section of eight RGB LEDs in a vertical alignment on the underside of top right-hand side of the board. Users wishing to expand upon have access to two 5050 RGB headers which are both capable of supporting strips with a maximum of 12 V. Comparing the B350 Tomahawk to the B450 Tomahawk, the heatsink follows a much sleeker design with MSI focusing a lot of its attention on improving the power delivery cooling capabilities, as well as the cleaner and more neutral looking aesthetics. 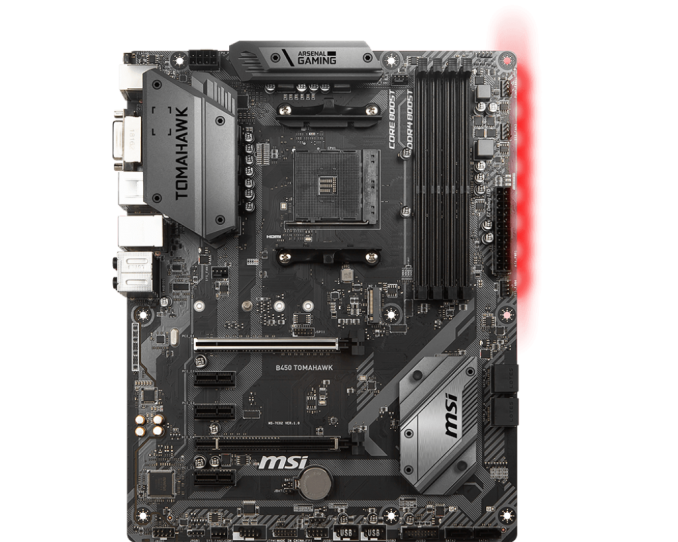 MSI’s implementation of the PCIe layout focuses around the center of the board with the solitary and full-length PCIe 3.0 x16 slot getting a garnishing of Steel Slot armor protection. This is designed to minimize the risk of slot damage from heavy graphics cards when in transit. The rest of the available PCIe slots all conform to the PCIe 2.0 interface, with a second full-length PCIe 2.0 x4 slot for add-in cards.

The improved firmware over the first iteration of AM4 motherboards allows for faster memory. The B450 Tomahawk supports DDR4-3466 straight out of the box, and with the four available RAM slots it allows for a maximum capacity of up to 64 GB. Unbuffered ECC is also supported. 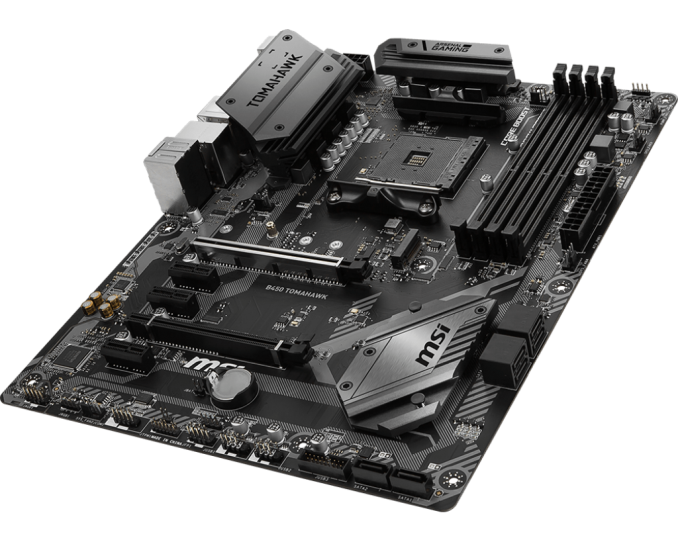 The B450 Tomahawk has better than average SATA support for a B450 board, with a total of six SATA ports. Four of the ports are from the B450 chipset, and two are driven directly from the CPU internal IO. The ports are split across the bottom right-hand side of the board with four of the ports banked together with right-angled connectors, whereas the other two ports are on the bottom of the boards PCB with cheaper straight connectors. The available SATA ports do have support for RAID 0, 1 and 10 arrays.

Also on storage, there is a single PCIe 3.0 x4 M.2 slot with support for PCIe and SATA drives, up to a maximum size of M.2 22110. Populating the M.2 slot with any drive does disable two SATA ports.

Buy MSI B450 Tomahawk on Newegg

In terms of fan headers, there are six 4-pin headers which are split into three different areas; one for the CPU, one for a water pump/AIO fan and four designated for system fans. The rear panel offers eight USB ports in total (which is fairly standard for a motherboard in this price range) and users looking to expand on this can do so with a pair of USB 2.0 headers and a USB 3.1 Gen1 header. Power to the motherboard is provided through a 24-pin ATX power connector and for the CPU, an 8-pin ATX 12 V power input is present. Users looking to reset the CMOS can do so with an old-fashioned jumper which is located right next to the battery. 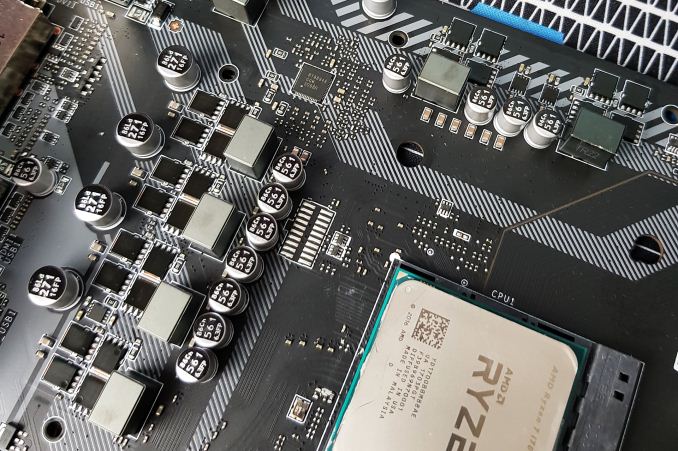 When you compare the key differences between the power delivery featured on the previous Tomahawk to this, MSI has certainly upped their game so to speak. Firstly, MSI has ditched the more value-focused NIKOS MOSFETs in favor of those from ON Semiconductor, and the new B450 opts for four MOSFETs per phase. 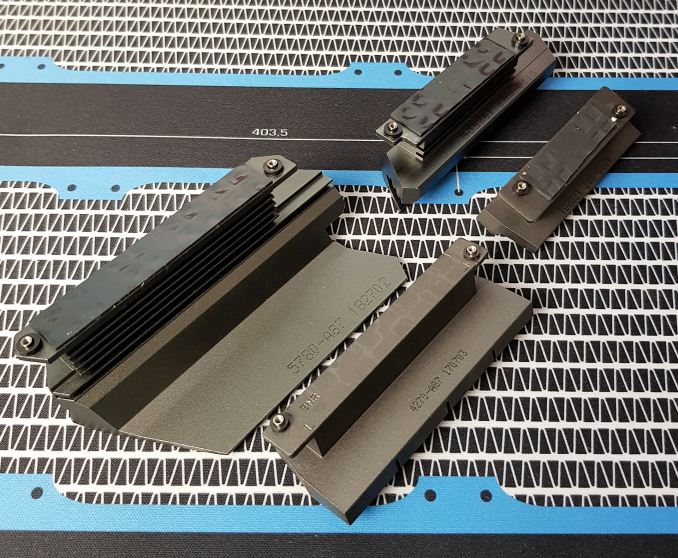 The other major improvement over the previous generation Tomahawk comes through the included heatsinks. The B450 Tomahawk not only has much cleaner and stylish looking heatsinks, but MSI has both increased the mass and extended the VCore MOSFET heatsink to have a larger area on top. This should help with longevity and stability as far as temperatures go. One of the usual caveats of a ‘refresh’ is that manufacturers sometimes recycle PCB designs and only change the visual aspects, but in this case the B450 Tomahawk is a step up. 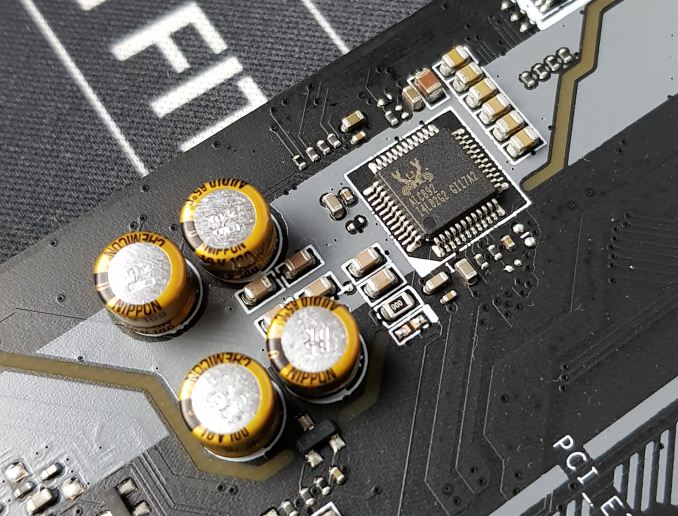 That being said, the audio area of the PCB on the B450 Tomahawk looks a little underwhelming in comparison. MSI has implemented the older Realtek ALC892 HD audio codec, which isn’t strange given the boards pricing. However it should be noted that the audio PCB on the B350 Tomahawk is certainly heftier with a total of ten Nippon Chemicon audio capacitors, which dwarves that of the B450 Tomahawk which has only four available.

As previously mentioned, the rear panel offers a total of eight USB ports. The B450 Tomahawk offers two USB 3.1 Gen2 ports, a Type-A and a Type-C. Other connections include a DVI-D port and a HDMI 1.4 port, a single PS/2 combination keyboard/mouse port, and a Realtek RTL8111H Gigabit networking controller. MSI has included a BIOS Flashback+ button as well. 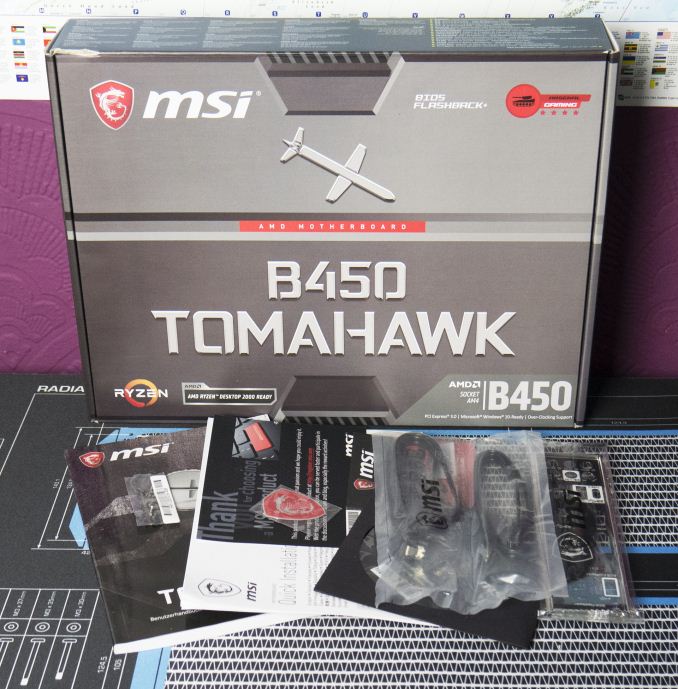 The accessory bundle as expected is rather basic but contains all the vital necessities to get a system up and running out of the box. MSI has scrimped a little on the SATA cables as they have included only two. Also present is a user manual, a driver and utility installation CD, a rear IO shield and an M.2 mounting screw.