The LG G8 Review: Solid, But Not Great 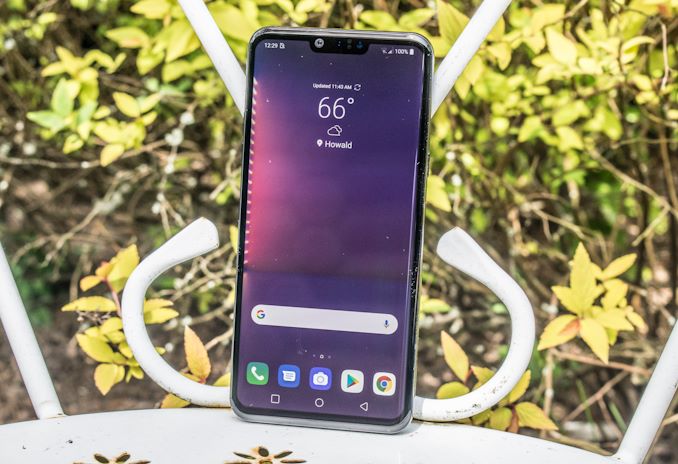 Only a few years ago LG was largely considered one of the top smartphone brands, competing alongside Samsung and the likes of HTC for marketshare. In the last few years however, LG has had quite a bit of a rough time, unable to deliver differentiating products and sometimes failing to deliver on some important basics in a smartphone. The result is dwindling marketshare numbers and less than stellar financial reports.

Today, the new LG G8 ThinQ is the newest iteration in LG’s line-up, bringing the newest technologies to the table and improving on last year’s model. One important thing to note about the G8 is that LG is no longer positioning the phone as the company’s flagship product, a position which now officially belongs to the V-series such as the upcoming V50.

The G8 thus doesn’t try to be revolutionary, and instead focuses on improving on some of the core aspects of what makes it a smartphone, with some gimmicks thrown in in an attempt to differentiate itself. Arguably, the most important distinction for the G8 is that this is the first phone in the series that comes with an OLED screen which represents a major shift in terms of LG’s past product segmentation between the G and V series.

In terms of hardware, the new LG G8 ThinQ ticks the marks in terms of offering the newest 2019 components, including the new Qualcomm Snapdragon 855 SoC. As seen in our Galaxy S10 review, the new SoC offers excellent performance and power efficiency and we’re expecting no less of the new G8.

LG makes the memory and storage options choice simple: The G8 only comes with a 6GB RAM and 128GB NAND (UFS 2.1) storage variant and avoids any up-sell models, instead relying on the microSD capability for more storage. Last year’s G7 also came with a 64GB storage option, which I would have argued might not have been sufficient for everybody, but the new 128GB base option should satisfy the vast majority of users, bar video-recording power users. 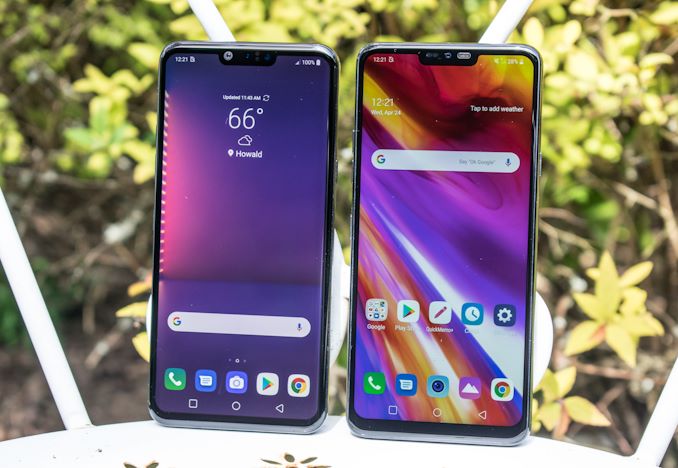 LG has opted to continue to use a display notch for the G8, however this year the company has replaced the earpiece with a new time-of-flight (ToF) sensor. LG uses the ToF sensor in a unique way, enabling Minority Report-like navigatiion and controlgestures when hovering your hand in front of the screen, including an option to unlock your phone via hand vein recognition.

The biggest change between the G7 and G8 is something that from a distance isn’t immediately visible: the display panel technology. The display shares the same 6.1” 3120 x 1440 resolution and 19.5:9 characteristics of its predecessor, however this is now an OLED panel instead of last year’s RGBW LCD screen.

As mentioned, this is the very first OLED phone in LG’s G-series, a feature that in the past was dedicated to distinct series (Flex lineup) or the newer V-series models. This had me worried for the G8 as LG’s history with mobile OLED screens has been quite tainted: The Flex series’ screens were grainy disasters, while subsequent devices such as the V30 had large manufacturing variations which resulted in visible unevenness in the screen. Last year’s V40 had good display characteristics, however the phone was tainted by abysmal power consumption which I ended up attributing to the display panel, as we saw similar degradation in other manufacturers’ phones who opted to use LG displays. This latter issue however was found on the LCD G7 – largely eliminating the RGBW display's power efficiency benefits at lower brightness levels.

Given the company's history with mobile OLED screen, it’ll be incredibly important for LG to get the G8 display right, as it will be a determining factor as the centre-piece of the phone, as well as a major factor for the phone’s battery life. 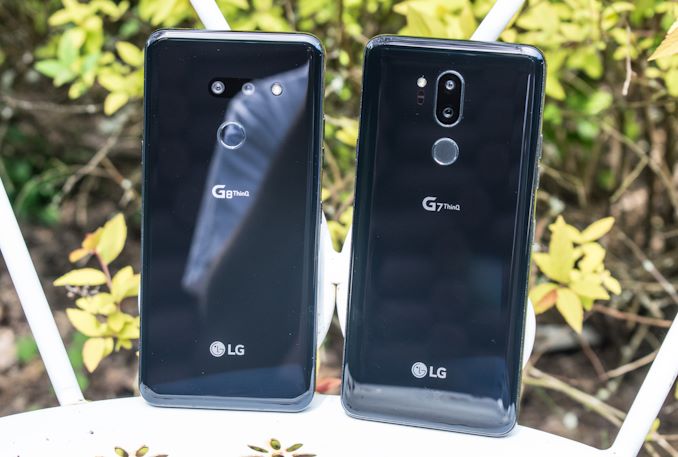 The G8 shares the same form-factor as its predecessor, and the back of the phones are similar glass slabs. LG has opted to continue to use a rear capacitive fingerprint sensor which still works excellently. While LG could have opted to use an optical front under-screen sensor, it’s not a major negative for the phone in my opinion.

What isn’t directly visible in the comparison shots is another internal design change: The new G8 increases the battery capacity from 3000mAh on the G7 to a new 3500mAh capacity module, representing a 16% increase. This was a major concern for the G7 which had reduced its capacity from the 3300mAh of the G6, so it’s good to see LG recoup that difference and add on to it.

The battery increase however didn’t come without compromises as the new phone is now slightly thicker at 8.4 versus last year’s 7.9mm. It’s not an issue for the ergonomics, as the phone remains of a smaller form-factor at 71.8mm width. The increase however is immediately noticeable, especially because LG has opted to reduce the curvature of the back glass, more noticeably thickening the edges of the new phone, even when accounting for the new curvature of the front display glass. Again, it’s not an issue for me, but it does feel less premium as other new more streamlined designs by the competition. 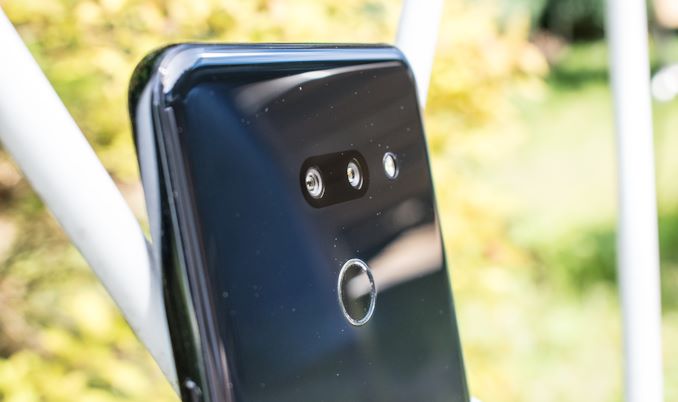 The biggest design change of the G8 is in the camera orientation and housing. It seems that the increased thickness of the new phone has allowed LG to make the cameras flush with the back glass. In fact, the back glass serves as the glass protection for the cameras. In terms of design, this does look great and represents a unique feature that we haven’t seen in smartphones in several years now (Pixel 1 if I'm not mistaken). It’s to be noted that this flush design is interrupted by the LED flash which does have a cut-out in the glass, and naturally also the fingerprint sensor.

While the new design looks great, I have concerns about reliability: Because the back glass serves as the protection for the camera, it means that the cameras will be just as prone to scratches as the rest of the phone as it doesn’t have a protective raised physical barrier (metal rim) or recessed harder dedicated glass from the rest of the phone. Minor scratches might not appear in camera shots other than light artefacts in low-light, however let’s hope users don’t get any major scratches directly in front of the camera modules. 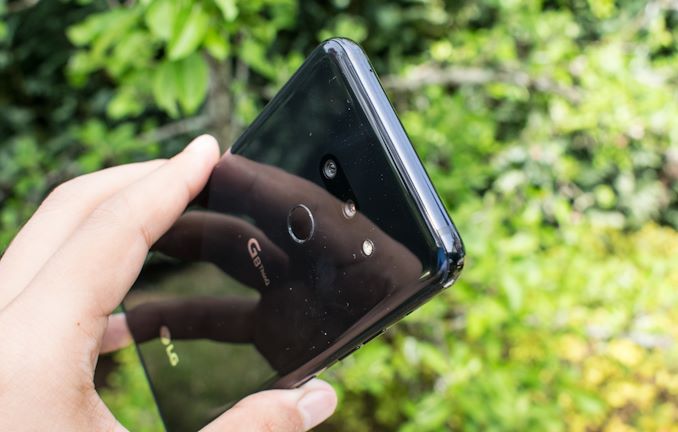 In terms of the cameras themselves, LG is doing some odd regional model segmentations. The G8 at MWC was presented as a triple-camera phone with dual-camera models for specific regions. In the end, the triple-camera variant seems to have ended up only in Korea as the US and Europe are seemingly getting the dual-camera variants, such as our review model. This is actually quite the competitive disadvantage for the G8, especially in the face of Samsung and Huawei’s newest triple-camera flagships. What’s more odd is that the Korean G8 with the triple camera setup doesn’t look to compromise anywhere else in terms of its specifications, and still comes in with similar full MSRPs. I just wish LG had gone with the full camera setup globally.

The wide angle sensor seems to remain the same as on the G7, a 16MP 1µm sensor with an f/1.9 107° wide-angle lens. The main sensor is where we see LG make big changes compared to the G7, as the new phone comes with the same 12MP 1.4µm sensor and f/1.5 78° main camera lens with OIS first introduced in the V40.

On the left side of the phone we find the two volume buttons as well as a dedicated button for Google Assistant. On the right side we find the power button as well as a wide SIM/microSD tray. It’s to be noted that in some markets the phone comes in a dual-SIM variant with a hybrid SIM/µSD slot as the second slot.

In regards to the speaker, we mentioned that LG had opted to remove the earpiece, but this doesn’t mean that the phone is limited to the bottom speaker. Under the display at about the level underneath the rear cameras we find a new piezoelectric exciter which vibrates the screen assembly, which in turn serves as a speaker. LG’s implementation surprisingly enough is quite good, although not as great as a dedicated powerful earpiece speaker. More importantly, the new under-screen speaker also now serves as a second speaker for stereo playback, which is a massive improvement over last year’s mono G7.

Overall, the G8’s new design isn’t anything ground-breaking. LG has made good functional improvements to the G7’s design while remaining true to it. It’s actually weird that I don’t have too much to say about the phone’s design, and if I had to critique anything about is that it does seem very conservative than some of the newer, more exciting competition.