While display interface standards are slow to move, at the same time their movement is inexorable: monitor resolutions continue to increase, as do refresh rates and color depths, requiring more and more bandwidth to carry signals for the next generation of monitors. Keeping pace with the demand for bandwidth, the DisplayPort standard, the cornerstone of PC display standards, has now been through several revisions since it was first launched over a decade ago. And now this morning the standard is taking its biggest leap yet with the release of the DisplayPort 2.0 specification. Set to offer nearly triple the available bandwidth of DisplayPort 1.4, the new revision of DisplayPort is almost moving a number of previously optional features into the core standard, creating what’s in many ways a new baseline for the interface.

The big news here, of course, is raw bandwidth. The current versions of DisplayPort – 1.3 & 1.4 –  offer up to 32.4 Gbps of bandwidth – or 25.9 Gbps after overhead – which is enough for a standard 16.7 million color (24-bit) 4K monitor at up to 120Hz, or up to 98Hz for 1 billion+ color (30-bit) monitors. This is a lot of bandwidth, but it still isn’t enough for the coming generation of monitors, including the likes of Apple’s new 6K Pro Display XDR monitor, and of course, 8K monitors. As a result, the need for more display interface bandwidth continues to grow, with these next-generation monitors set to be the tipping point. And all of this is something that the rival HDMI Forum has already prepared for with their own HDMI 2.1 standard.

DisplayPort 2.0, in turn, is shooting for 8K and above. Introducing not just one but a few different bitrate modes, the fastest mode in DisplayPort 2.0 will top out at 80 Gbps of raw bandwidth, about 2.5 times that of DisplayPort 1.3/1.4. Layered on that, DisplayPort 2.0 also introduces a more efficient coding scheme, resulting in much less coding overhead. As a result, the effective bandwidth of the new standard will peak at 77.4 Gbps, with at 2.98x the bandwidth of the previous standard is just a hair under a full trebling of available bandwidth. 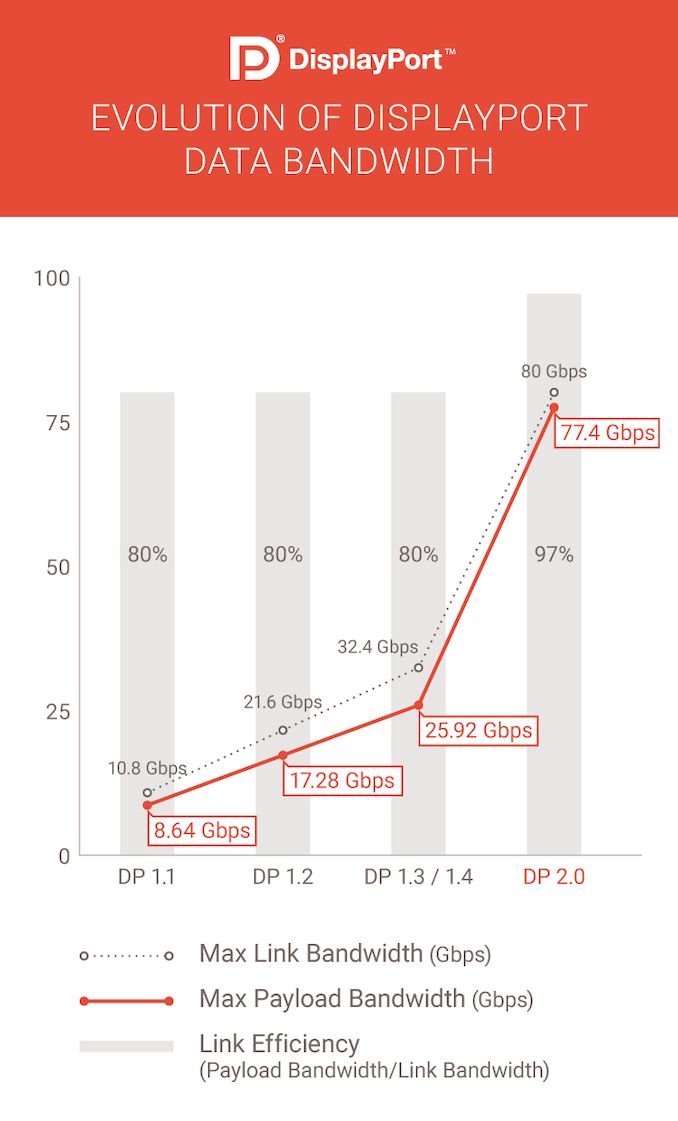 Putting all of this in practical terms for a moment, for VESA and its member manufacturers then, the new standard opens the door to higher resolution, higher refresh rate, and wider color gamut monitors. DisplayPort 2.0 is fast enough to not just support an 8K monitor without any kind of compression (including chroma subsampling), but it’s enough to do so at 30-bit color, allowing for HDR support even at that high of a resolution. Similarly, 10K monitors at 24-bit color are now possible without compression, and 16K monitors with compression. Overall the applications are about as varied as manufacturers want to go, with options ranging from ensuring there’s sufficient bandwidth for next-gen VR to enabling new daisy chaining setups (daisy chained 5K monitors, anyone?), not to mention even more interesting setups such as mixing USB data with high resolution DisplayPort monitors. Many things which VESA is happy to point out that even HDMI 2.1 can’t do, due to the former’s significant bandwidth advantage (all of this solidly putting DisplayPort back on top in terms of total bandwidth).

Diving a bit deeper into today’s announcement, let’s talk about the DisplayPort 2.0 physical layer. For the last half decade or so, VESA members have commented here and there about where the standard might go in the future, and what direction the physical ports would take. Developing the next generation of high bandwidth external interfaces only gets harder and more expensive with each generation, which has increasingly caused the various standard bodies to coalesce around a handful of physical layers and data transmission technologies. At the same time, the physical DisplayPort, which was designed over a decade ago, wasn’t originally designed to scale up to the amount of bandwidth DisplayPort 2.0 will be pushing. As a result every option has been on the table to some degree, including disregarding most of the DisplayPort standard, DisplayPort and all.

The end result then is an interesting compromise, and importantly, one that delivers more bandwidth while retaining backwards compatibility with existing DisplayPort gear. The DisplayPort itself is staying: it and the USB-C connector (via DP alt mode) are both official ports for the new DisplayPort 2.0 standard. And because of this, the number of pins and resulting high speed data lanes is remaining unchanged as well, with DisplayPort continuing to operate over 4 lanes. Finally, the DisplayPort 2.0 standard also retains the technology’s packet-based approach to communications, which means that image data continues to be sent as packets over a fixed bandwidth link, as opposed to pixel-centric pixel clock approaches.

So what has changed to enable DisplayPort 2.0? While the titular DisplayPort itself has stayed, the rest of the physical layer has been almost entirely replaced… with Thunderbolt 3. 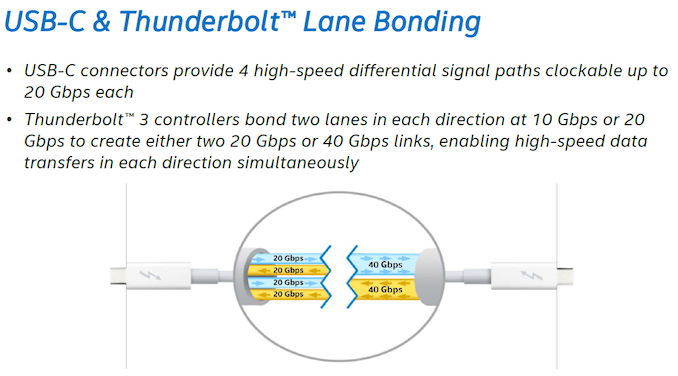 Under the hood, Thunderbolt 3 operates fairly similarly to DisplayPort, with 4 high-speed each lanes carrying packets of information at 20 Gbps. However while TB3 is a true bi-directional, full-duplex link with 2 lanes allocated for each direction, DisplayPort is focused on sending large volumes of data in just one direction: out. As a result, DisplayPort 2.0 reverses the two inbound lanes to outbound lanes, allowing the four total lanes to be combined into a single 80 Gbps link.

But what of cables? Here’s where things get a bit trickier, both for VESA and for users. Thunderbolt 3 pushed the limits of copper cabling, and as a result for all but the shortest runs it requires active cabling, with transceivers at each end of a cable. While effective, this drove up the cost of Thunderbolt 3 cables versus relatively cheap all-copper commodity USB 3 and DisplayPort 1.x cables. By using Thunderbolt 3 as the basis of their new standard, VESA has inherited the cable technology limits of the standard as well.

The answer to the cable question then is that VESA hasn’t really answered it. Instead, they’re focusing on what they can do now with passive cables. All told, the DisplayPort 2.0 actually introduces not one, but three new data rates: 10 Gbps per lane, 13.5 Gbps per lane, and 20 Gbps per lane. Dubbed Ultra High Bit Rate (UHBR), the for free-standing monitors VESA right now is focusing on 10 Gbps per lane (UHBR 10), which will deliver a total of 40 Gbps of bandwidth.

At just half the data rate of full-fat DisplayPort 2.0 (and Thunderbolt 3), UHBR 10 is resilient enough that it can operate over standard passive copper cabling, and cables should have little issue reaching 2-3 meters. VESA has actually been preparing for this for some time now, and UHBR 10 aligns with their previously-launched DisplayPort 8K cable certification program; 8K-certified cables will be able to meet the signal integrity requirements for UHBR 10.

Past that, however, VESA isn’t currently exploring (or at least not focused on) passive cables for the higher bitrate modes. Instead, the group envisions UHBR 13.5 and UHBR 20 being tethered setups: manufacturers would ship devices with an appropriate port/cable already attached. These can potentially be passive cables for very short runs (think laptop docks), or integrated active cables for longer runs. I should note that the group hasn’t closed the door entirely to more traditional passive cable setups for these higher bitrates, but at least for the moment the group doesn’t see very many non-tethered use cases coming to market in the near future.

Tangentially, here, there is one more signal-related changed to the DisplayPort standard. Forward Error Correction (FEC), which was introduced to DisplayPort 1.4 as part of the Display Stream Compression (DSC) standard, is now a core part of DisplayPort 2.0. So on a 2.0 link, FEC will be in use at all times, reflecting the challenge in getting these high speed interfaces to constantly transmit data in an error-free manner.

Shifting gears, along with the significant physical layer changes being introduced in DisplayPort 2.0, the standard is also introducing some much more modest feature changes.

First and foremost, Display Stream Compression support is now mandatory for DisplayPort 2.0 devices. Previously introduced as part of DisplayPort 1.4 – and not really hammered out entirely until a couple of years after that – DSC is the group’s standard for “visually lossless” image compression. Operating on small groups of pixels, DSC offers modest compression ratios of around 3:1, with the goal of compressing images just enough to save power and bandwidth without introducing visual artifacts and without adding significant latency.

At any rate, starting with DisplayPort 2.0, DSC is now a core part of the DisplayPort standard. To be clear, 2.0 devices do not have to use DSC – the preference is clearly towards uncompressed images when the bandwidth allows for it – however 2.0 devices must be able to encode, pass, and decode DSC compressed data. This will, over time, lay the groundwork for manufacturers to develop and release monitors that require DSC (at least in certain modes), as they’ll be able to sell monitors knowing that all 2.0 devices can drive them.

Speaking of efficiency, the DisplayPort 2.0 standard is also introducing another vendor-optional feature focused on power efficiency, and that’s Panel Replay. Derived from earlier Panel Self Refresh technologies that are part of the embedded DisplayPort standard, Panel Replay is a partial self-update mechanism that allows a system to only transmit and update the portion of an image that has changed since the previous video frame. Like PSR in eDP, this feature is primarily intended for laptops and other mobile devices, where power consumption and the resulting impact to battery runtimes are important qualities. Transmitting less data reduces not only the amount of energy used chauffeuring bits around, but it also reduces the amount of processing required in a display controller.

Last but not least, DisplayPort 2.0 is also updating how “branch devices” work in the standard. Essentially the splitters in a Multi Stream Transport setup, DisplayPort 1.x required that the branch device be capable of decoding a DisplayPort bitstream, which is not an easy feat with 20 Gbps+ of data. So instead, for 2.0, branch devices are being simplified some, and now will just be able to forward data rather than having to decode it. This should make MST (and daisy chaining) a bit easier to implement overall, as branch devices won’t need to be as complex.

On a final note, ahead of today’s specification release I also asked about the state of variable refresh support on DisplayPort. VESA Adaptive Sync is an optional feature for monitors under DisplayPort 1.x, and it will remain so under DisplayPort 2.0. So manufacturers can continue adding it as a useful feature for their monitors, but there are no plans to make it mandatory.

Wrapping things up, the latest version of the DisplayPort standard is easily the biggest update to the PC display standard since it launched in 2007. By replacing the DisplayPort physical layer with Thunderbolt 3, VESA has greatly increased DisplayPort’s bandwidth potential, laying the groundwork for 8K monitors and beyond. This update doesn’t come for free, and VESA’s member companies will have to tackle the same kind of high-bandwidth cabling issues that Thunderbolt 3 itself had to address over the last few years, but ultimately it’s a situation that gives the display standard a major shot in the arm in terms of bandwidth, while pushing the PC industry ever so closer towards using a handful of common standards for all high bandwidth I/O.

As for the first retail products, the good news is that this will show up sooner than later. Because the new standard is based on the Thunderbolt 3 physical layer, member companies can hit the ground running on development and testing. As a result, VESA expects the first retail devices to show up in the latter part of 2020, less than 18 months from now.