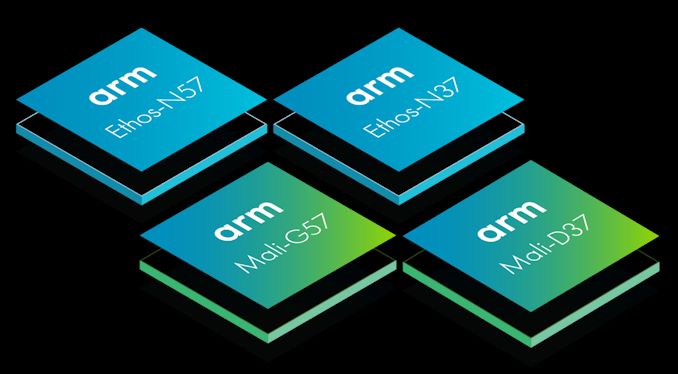 Today Arm is announcing four new products in its NPU, GPU and DPU portfolio. The company is branding its in-house machine learning processor IPs the Ethos line-up detailing more the existing N77 piece and also revealing the smaller N57 and N37 siblings in the family. To top things off, the company is also making ready its first mid-range GPU IP based on the brand-new Valhall architecture, the new Mali-G57. Finally, we’re seeing the release of a new mid-range DPU in the form of the Mali-D37. 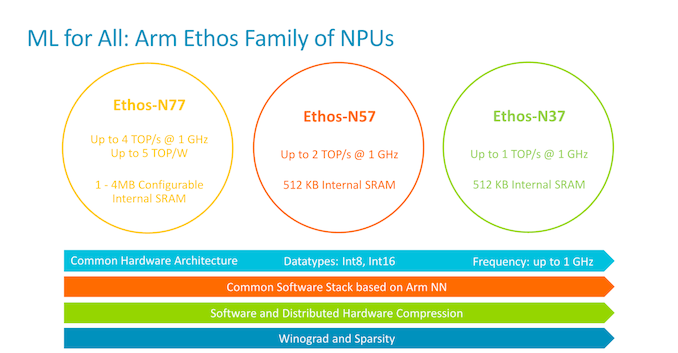 Arm’s NPU IP offering was first announced early last year, detailing its architecture a few months later, and has been publicly been known until known just as “the Arm Machine Learning processor”. Arm at TechCon this year has officially branded the IP as the Ethos line-up, and the N77 has been the main product that’s been previously referred to as the Arm MLP codename.

Microarchitecturally, the new branded Ethos-N77 now publicly changes its specs compared to what had been revealed last year by allowing for a configurable 1 to 4MB SRAM implementation, whilst last year it had been disclosed it would scale up to 1MB only. Arm explains that customers needed more memory bandwidth for processing these mesh networked NPUs, as DRAM bandwidth doesn’t scale up in the premium segment as fast as the core count does. The flagship IP offers up to 4TOPS processing power at 1GHz clock and has a respectable 5TOPS/W efficiency. 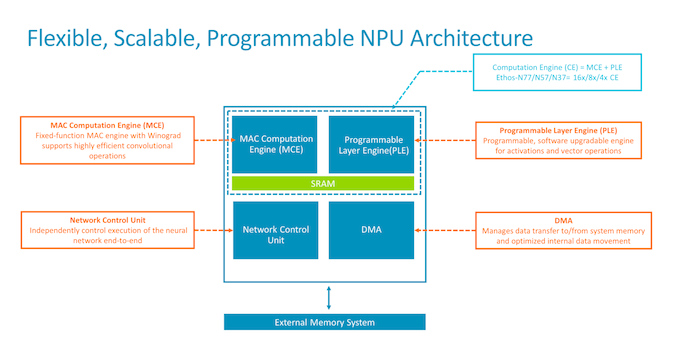 Arm is able to use the same building blocks across the different IPs. The NPUs all share the same MAC computation engine (MCE) and programmable layer engines (PLE). The MCE consists out of 128 MAC units, as disclosed last year, and is paired alongside a PLE. An MCE and PLE, plus SRAM, make up a computation engine (CE), and this is the scaling block that differs between the N77, N57 and N37, coming in 16x, 8x and 4x configurations in terms of the CE count. 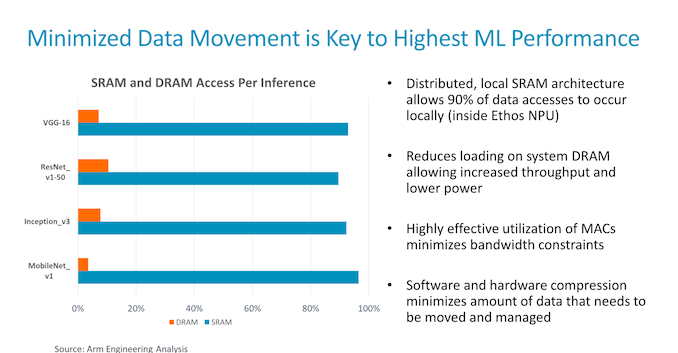 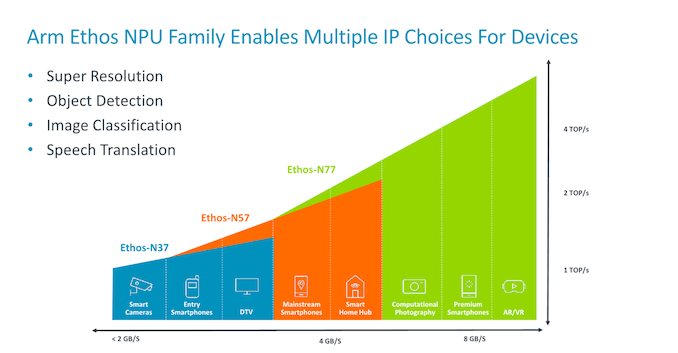 The mid-range and low-end variants are being released a lot faster than other new IP technologies because Arm is seeing a lot more interest in doing ML in cost-constrained devices where every mm² of silicon is important. Particularly features like smartphone face unlocking or DTV resolution upscaling are becoming commodity features.

The new NPUs have already been licensed and delivered to customers.

Earlier this year, Arm had announced the new Valhall architecture in the new Mali-G77 that we’re expecting to see in SoCs next year. The new GPU architecture is a more major departure from the Bifrost based GPUs we’ve seen over the last three years as Arm has completely revamped its graphics ISA and computation microarchitecture. 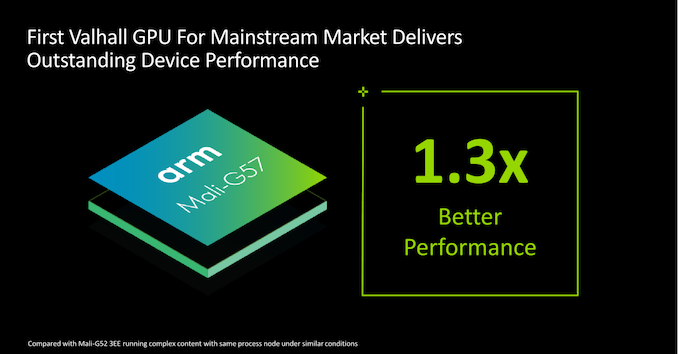 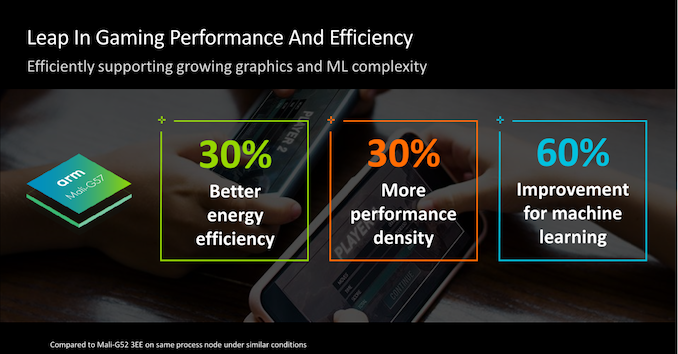 Today, Arm reveals that the company is adopting the new Valhall architecture in the mid-range, starting off with the new Mali-G57. We currently don’t have too many details on exactly what the finer microarchitecture configurations of the new GPU looks like, but we’re very likely looking at something that will be very similar to the G77, scaled down similar to how the G52 looked like compared to the G72.

Finally, to wrap things up, Arm is now bringing to market a new mid-range DPU in the form of the Mali-D37. 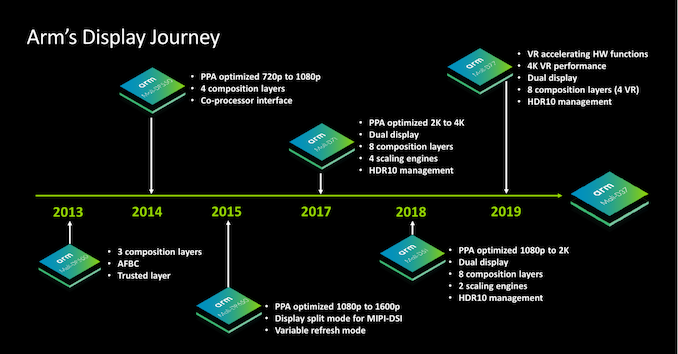 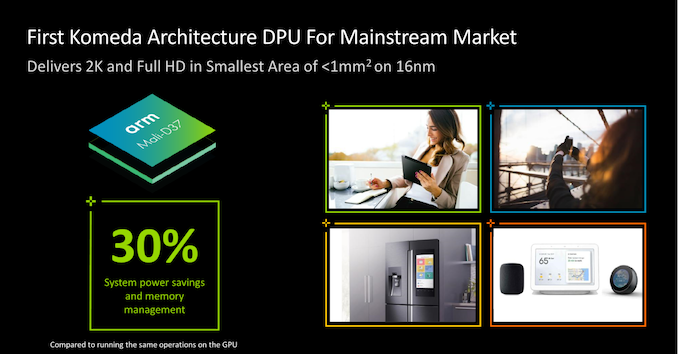 The new IP is based on the “Komeda” architecture which was first introduced in the Mali-D71 and its follow-up, the Mali-D77 announced this year. Then new DPU targets resolutions of 2K and FHD and promises to take up only <1mm² on 16nm.