Nvidia’s Orin SoC chipset had been on Nvidia’s roadmaps for over 2 years now, and last December we got the first new details of the new automotive oriented silicon chip, revealing characteristics such as it containing 12 core cores of Arm’s newest “Hercules” microarchitecture (A77 successor).

Orin is meant to be the heart of Nvidia’s upcoming DRIVE automotive platforms, and today the company is ready to reveal a few more important details such as the scalability of the SoC and the different DRIVE solutions.

Specifications wise, the newest revelations about the Orin design is that it features Nvidia’s newest Ampere architecture as its integrated GPU. Generally, this shouldn’t come as too much of a surprise given the timeline of the SoC.

Nvidia still doesn’t disclose exact configurations of the GPU, but if the mock-up die-shot of the chip is anything to go by, we’ll be seeing a 32SM configuration – which fits nicely with the claimed peak 200 INT8 DL TOPs that Nvidia claims for the chip. 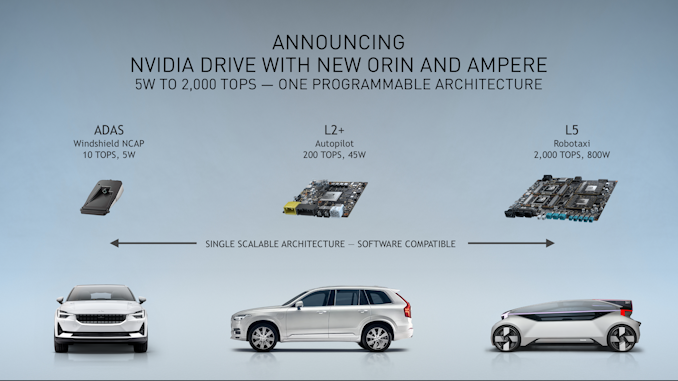 Manufacturing wise, we again don’t have exact details, but we’re assuming a 7nm-class process node. One interesting disclosure today however was the fact that Orin is supposed to scale from 5W to up to 45W platforms, which is a very wide range. 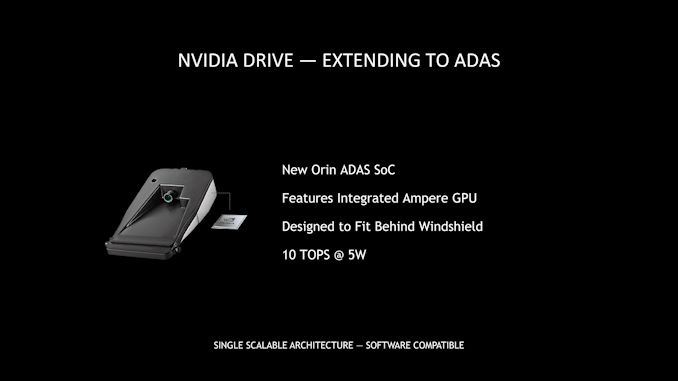 The 5W platforms claims up to TOPs inference performance, and it’s meant for ADAS solutions as depicted above, designed to fit behind a windshield. Nvidia being able to scale Orin down to a 5W TDP is extremely interesting, but undoubtedly will have the chip disable much of its capabilities, or clock down to very low frequencies to achieve this power envelope. 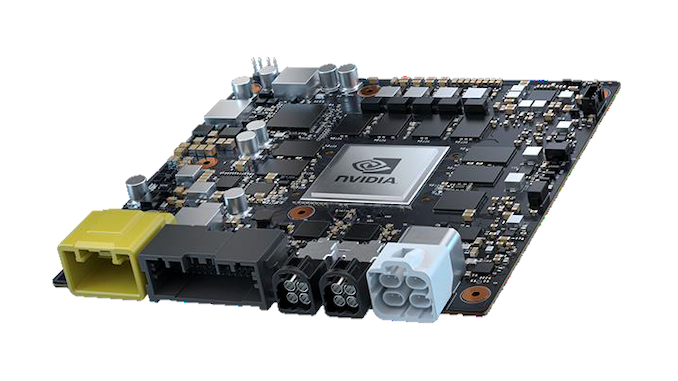 The chip is also offered in an L2+ automotive solution, enabling the full power of Orin at up to 45W. Here we see the full 200TOPs of inference performance that Nvidia had disclosed back in November. We're seeing 8 DRAM chips on the depicted board, likely pointing out to a 128-bit memory controller setup. 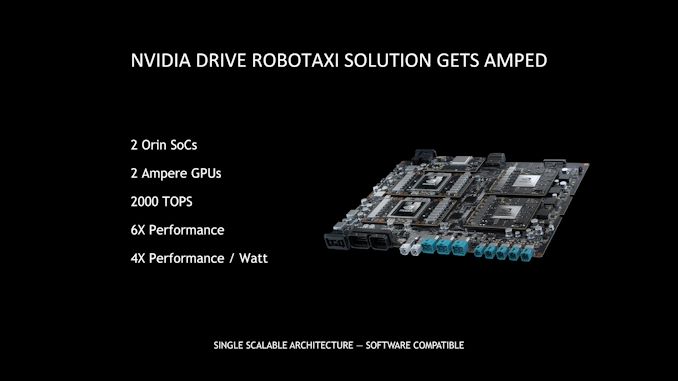 Finally, Nvidia is bringing out the biggest guns in its DRIVE line-up for the robotaxi solution, an L5 automotive solution is meant to power fully autonomous robotaxi vehicles.

The platform here has two Orin SoCs paired with two Ampere GPUs for total power envelope of 800W and up to 2000 TOPs of performance. The GPU here, judging by its size and form-factor with HBM memory is seemingly the newest GA100 Ampere GPU. Nvidia disclosed that this GPU alone scales up to 400W in the SXM form-factor. Clocking two of these slightly lower and adding two 45W Orin SoCs gets us to the massive 800W power envelope.