Sometimes for a company to get its projects over the line, it requires the help of crowdsourcing ideas. One such company is Eve Tech, or EVE for short, and looking to build on the success of its first-generation EVE V 2-in-1 dubbed the "Surface Pro Killer". Today the company has officially lifted the lid on its second-generation EVE V. The new EVE V 2-in-1 includes a whole host of impressive features and specs including Intel's Tiger Lake mobile processors with Xe integrated graphics, Thunderbolt 4, Wi-Fi 6, and a 13.4" 4K (3840 x 2400) with 10-point multitouch. The design of the device has been through deep interactions with interested end-user customers to build a device with the specifications that they want.

The EVE V 2nd generation has crammed all of its technology into a very high specification 2-in-1 with consultation of potential customers. For a convertible designed to compete with the latest and greatest, Eve Tech has lifted the lid on the EVE V 2nd Gen specifications, the technologies under the hood, as well as an impressive array of features. 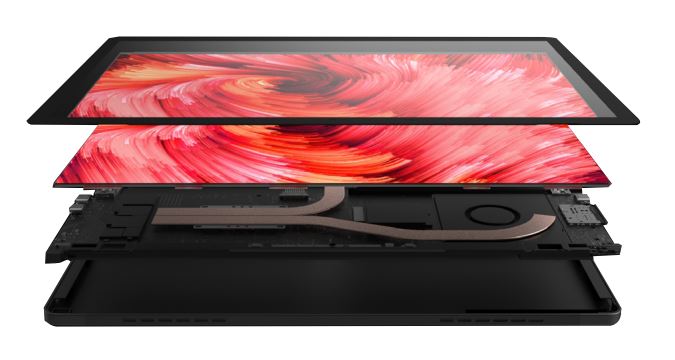 Focusing on the screen, the EVE V is using a 13.4-inch Indium Gallium Zinc Oxide (IGZO) panel with a native 3840 x 2400 pixel (4K 16:10) resolution. This has a 16:10 aspect ratio, with two different variations including the higher-spec 4K resolution, or an FHD 1920 x 1080 resolution at 16:9. Some of the finer specifications of the screen include a 1500:1 contrast ratio, up to 500 nits of brightness, and is using edge-to-edge Corning Gorilla Victus glass, announced recently as one of the most scratch resistant glass surfaces.

The Tiger Lake processor comes with four cores and eight threads, as well as Xe graphics and Thunderbolt 4 support. For a convertable, the EVE V uses a lot of that IO, with three Type-C ports, two of them Thunderbolt 4. The two Thunderbolt 4 Type-C ports also include DisplayPort 1.4 and HDMI 1.4b video support, with a power output of up to 5V or 15 watts as well as charging capabilities. Other connectivity includes a USB 3.2 G2 Type-C port, with a single 3.5 mm audio jack, a microSD reader with compatibility for SDXC up to a maximum of 2 TB. The sound capabilities are also impressive with dual 0.7-watt front-facing speakers, and a pair of 1 W front-facing low-frequency speakers that resemble subwoofer qualities. Some variations of the EVE V will come with a Nano Sim slot for 4G capabilities.

Included with the EVE V is its V pen, which has been upgraded over the EVE V 2016 model. It is based on Wacom's AES 2.0 technology and features 4096 pressure levels which is designed to benefit from the 10-point touchscreen. The new V keyboard supplied includes a folio cover with a soft touch feel, with a Windows Precision touchpad that includes a textured glass surface for optimal precision. It also includes an adjustable backlight for low light situations. There is a 5 Megapixel rear-facing camera, as well as a 720p front-facing camera for conference calls, as well as a fingerprint reader integrated into the power button.

Although Eve Tech hasn't fully announced the availability of the V, it estimates that it'll start shipping by the end of Q3 2021, and will be available globally across various retailers. Users can reserve the EVE V with a fully refundable down payment of $300, with the remaining expected to be paid prior to shipping.