As part of Intel’s 2021 Innovation event, the company offered a brief update on the Aurora supercomputer, which Intel is building for Argonne National Laboratory. The first of the US’s two under-construction exascale supercomputers, Aurora and its critical processors are finally coming together, allowing Intel to finally narrow its performance projections. As it turns out, the 1-and-change exaFLOPS system is going to be more like a 2 exaFLOPS system – Aurora’s performance is coming in high enough that Intel now expects the system to exceed 2 exaFLOPS of double precision compute performance.

Planned to be the first of the US’s two public exascale systems, the Aurora supercomputer has been through a tumultuous development process. The contract was initially awarded to Intel and Cray back in 2015 for a pre-exascale system based on Intel’s Xeon Phi accelerators, a plan that went out the window when Intel discontinued Xeon Phi development. In its place, the Aurora contract was renegotiated to become an exascale system based on a combination of Intel’s Xeon CPUs and what became their Ponte Vecchio Xe-HPC GPUs. Since then, Intel has been working down to the wire on getting the necessary silicon built in order to make a delivery window that’s already shifted from 2020 to 2021 to 2022(ish), going as far as fabbing parts of Ponte Vecchio on rival TSMC’s 5nm process.

But there is finally light at the end of the tunnel, it would seem. As Intel pushes to complete the system, its performance is coming in ahead of expectations. According to the chip company, they now expect that the assembled supercomputer will be able to deliver over 2 exaFLOPS of double precision (FP64) performance. The system previously didn’t have a specific performance figure attached to it, beyond the fact that it would be over 1 exaFLOPS in FP64 throughput. 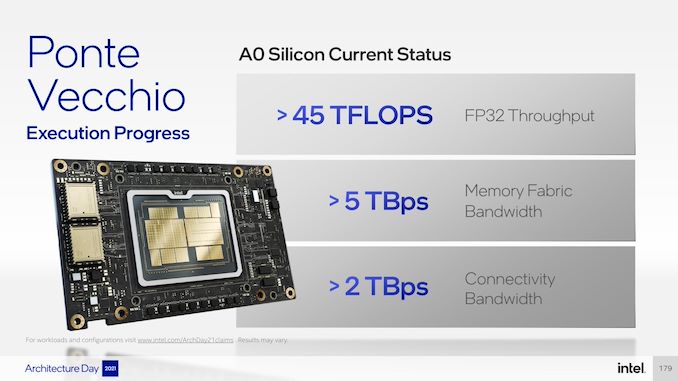 This higher performance figure for Aurora comes courtesy of Ponte Vecchio, which according to CEO Pat Gelsinger is overdelivering on performance. Gelsinger hasn’t gone into additional detail in how Ponte Vecchio is overdelivering, but given that IPC and overall efficiency tends to be relatively easy to nail down during simulations, the most likely candidate here is that Ponte Vecchio’s is clocking higher than Intel’s previous projections. Ponte Vecchio is one of the first HPC chips (and the first Intel GPU) built on TSMC’s N5 process, so there have been a lot of unknowns going into this project.

For Intel, this is no doubt a welcome bit of good luck for a project that has seen many hurdles. The repeated delays have already allowed rival AMD to get the honors of delivering the first exascale system with Frontier, which is currently being installed and is expected to offer 1.5 exaFLOPS in performance. So while Intel no longer gets to be first, once Aurora does come online next year, it will be the faster of the two systems.