While unpacking the U30Jc, I was immediately struck by how much better it feels compared to the UL80Vt. At the time, I was wrapping up the HP ProBook 5310m review, and personally there's no way I would save $100 to get what is clearly a slower system. In terms of build quality, while ASUS doesn't use a magnesium alloy frame, the U30Jc feels just about as solid as the ProBook 5310m. The only exception to this is the keyboard, which has a slight amount of flex if you press hard (and I mean really hard).

Like the HP 5310m, the appearance is an attractive blend of aluminum surfaces with a few glossy plastic highlights. Actually, the only glossy plastic is around the LCD bezel, and going with a silver brushed aluminum finish (as opposed to anodized black) makes fingerprints and smudges much less of a concern. The only complaint I have is with the glossy bezel and LCD. I know some users prefer glossy panels (generally for indoor use), but with eight hours of potential mobility it's hard to imagine never wanting to take this laptop outside. A matte LCD with an aluminum bezel to match the rest of the chassis would have been better, at least in my view. 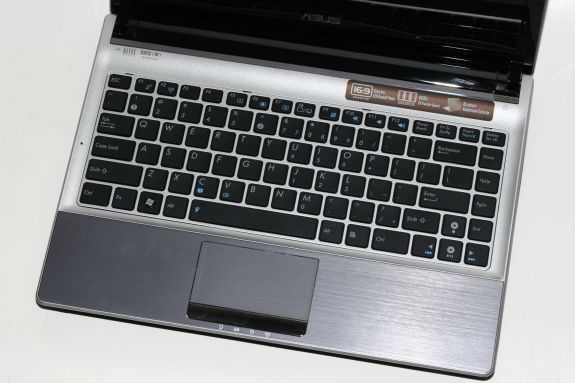 As noted above, the keyboard does exhibit a slight amount of flex, but it's not something I generally noticed during use. By pressing quite hard it's obvious that the keyboard lacks the rigidity of a ThinkPad T-series, and it's not a spill resistant design either, but it works fine otherwise. I'd rate the typing experience as roughly the same as the HP 5310m, which was very good. The major difference (outside of appearance and flex) is that ASUS uses rounded corners on the keys compared to the square corners on the ProBook. There's plenty of space between the keys and the layout is just what I like: the Ctrl key is in the bottom-right corner with the Fn key in one position; Home, End, PgUp, and PgDn are all in a column on the far right, with no Fn+[key] combination required to access any of the commonly used keys.

The touchpad and palm rest are nearly identical in size compared to the ProBook 5310m, which is a good thing. The trackpad supports multi-touch, and we definitely prefer the aluminum surface to the glossy plastic on the HP (and other laptops). It works well, and our only minor complaint is ASUS' continued use of rocker-style mouse buttons as opposed to having two discrete buttons.

Temperatures and noise levels during testing were both good, with a chassis that remained cool to moderately warm to the touch. We measured temperatures of up to 32C during a full CPU+GPU load; not surprisingly, that was for the top-left corner where the GPU resides. The rest of the laptop was up to 5C cooler. Noise levels at idle hover close to the limits of our testing environment, but at 33.5dB(A) the U30Jc is slightly louder than some of the other laptops we've tested. Under load noise levels remain nearly as quiet, increasing to just 35.5dB(A). The fan speed also changes smoothly so you don't notice a sudden jump in noise output, at least in our experience. We're much happier with a laptop that stays at a near-constant 33dB than one that oscillates between 30dB and 36dB every minute or so (Alienware M11x being a prime example of the latter). 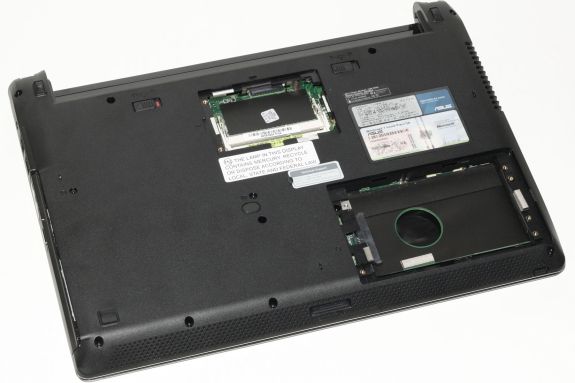 Access to the internals of the U30Jc is provided via two panels. The larger panel houses the hard drive while the smaller panel in the middle of the chassis is home to the SO-DIMMs. If you remove the keyboard (which is a rather painless process for a change—just two screws on the bottom plus four clips you can get at with a flat-head screwdriver), you can also gain access to the single Mini PCIe slot. By default it's occupied by the wireless adapter, though, so there's not much point in replacing it. As for the battery, the A1 model includes a large 8-cell 84Wh battery; other models (likely not in North America) may go with a smaller 6-cell 63Wh battery.

The stereo speakers are located at the front of the chassis, with small grilles in front of them. Audio quality from the small speakers is about what you'd expect: okay for basic stuff, but nothing spectacular. If you want good audio fidelity, the headphone jack is the way to go. On the bright side, the speakers don't distort even at maximum volume, which is more than we can say for some laptops. The hinge opens about 135 degrees, so if you're after a laptop that can lie flat this one doesn't quite make it. (We had a reader ask about that feature in case you're wondering; it's not important to most of us, but his vision is so poor that the ideal way for him to read the screen is to hold it up vertically in front of his face.)

Like many other inexpensive (relatively) laptops, expansion options are somewhat limited. Three USB 2.0 ports are the only way to add additional devices. The HDMI output makes this useful as a portable multimedia laptop, and we really like the appearance and design. However, anyone looking for FireWire, USB 3.0, or ExpressCard support—or even a free mini PCIe slot—will be disappointed. In short, you get everything you really need with the U30Jc, but not much in the way of extras. It's a conscious decision on the part of ASUS to balance features and performance with size, and here they've chosen to add an Optimus GPU and cut some other extras that the majority of users will never miss. (I know personally that I have never actually used a FireWire or eSATA port on a laptop, so USB 2.0 works fine for me.)