Demand for mini-ITX boards built around Intel’s socket 1156 has been rather high this year, and as a result, vendors like DFI, ECS, Intel and Zotac have enjoyed free reign of sales despite releasing products that don’t necessarily live up to or meet user expectations. Going mini-ITX means there will always be a few compromises on the hardware/peripheral front (many of which users are prepared to stomach), but what makes things less palatable all-round is when boards are delivered with partially functional BIOSes that lack any real finesse or control of key features. Sensing an opportunity, Gigabyte has stepped in to the fray with the keenly priced H55N-USB3 (MSRP $105) and is looking for a slice of the mini-ITX pie. It’s certainly a welcome move, because in general, Gigabyte delivers feature-packed BIOSes that are well laid out and easy to use.

We’ve been lucky enough to get acquainted with Gigabyte’s H55N-USB3 motherboard over the past week, and for once have our review ready around launch time. We’ll tell you right now that we rather like this little board, there are a few things that need attention, but overall it’s the best socket 1156 mini-ITX motherboard that’s passed through our hands to date. So without further ado, we’ll go straight to board pictures and layout commentary: 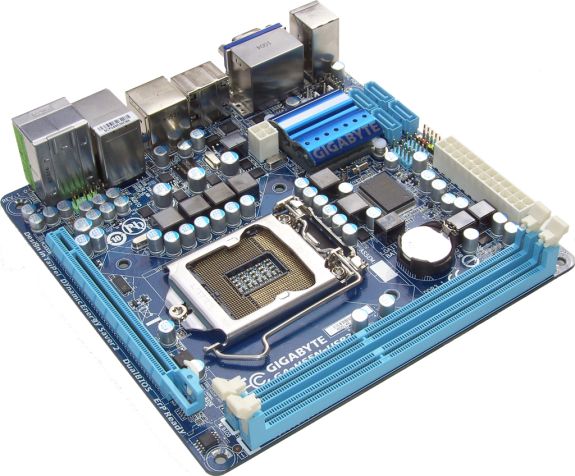 Gigabyte starts off with the standard Intel mini-ITX layout, placing the PCH above the processor, shifting the socket downwards and rather close to the lone PCIe slot, leaving no room for tower type processor coolers if the PCIe slot and both DIMM slots are occupied. The PCIe socket latch can also be a pain to get to when using the intel stock cooler as spacing is very tight.

The H55 has provision for up to six SATA ports, Gigabyte like other mini-ITX vendors are providing us with four, plus an eSATA port on the rear IO panel. As this is the H55 chipset, we forgo the option to run RAID, so if you’re looking for RAID functionality, Intel’s DH57JG is still the only option.

A total of six USB ports are available on the rear IO panel (four are on-board via headers).  Legacy lovers get VGA and a PS2 combo port for older hardware while DVI and HDMI out are on-tap for the newer stuff. The two blue ports are USB 3.0, fired by NEC’s controller, making this the only H55/H57 based mini-ITX motherboard with USB 3.0 as standard. Sure, plug in USB 3.0 PCIe cards are readily available if we choose to go with another vendor’s mini-ITX board, but that only makes sense if you don’t need the lone PCIe slot for anything else. USB 3.0 may not be an outright killer feature, but it certainly makes a nice addition to mini-ITX without sacrificing some of the limited upgrade options enforced by a small form factor.

The H55N-USB3 has just hit retailer shelves, Newegg have it on sale here. Team this board up with Lian Li’s PC-Q08B, and we’ve got the making of a fine little gaming machine, everyday PC, or file server. Whoops! We’re getting a bit carried away, there’s a review to finish and features to discuss first…

We mentioned tight socket~slot spacing and heatsinks earlier, here’s another reason why some aftermarket cooling solutions won’t fit without a few modifications: 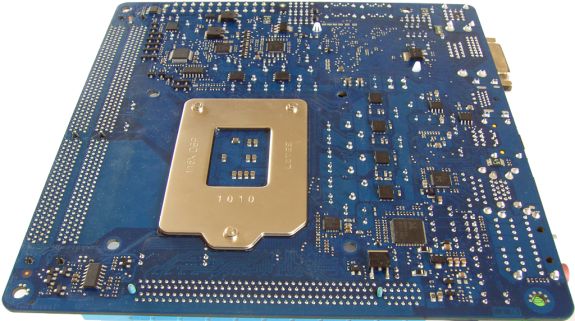 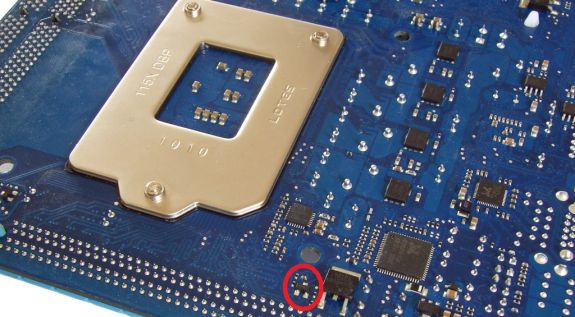 Large cooler backplates may have problems – the Corsair H50 won’t fit (due to the circled transistor).

The lower right CPU mounting hole is surrounded by a few ICs, transistors and other small SMT components, which will cause problems with larger backplates such as those used by Corsair’s venerable H50 all-in-one water cooler. Excessive pressure on any of these ICs will crack component casing, resulting in a dead board. Just a little more thought from Gigabyte to this situation would not have gone amiss.

As far as we know, Gigabyte is shipping boards with either the F2 or F3 BIOS, which is also where our test journey began. One thing that tripped us up testing these early BIOSes was an issue we’ve seen before on Gigabyte’s H55/H57 boards. Setting AHCI mode for SATA ports results in not being able to boot from our Pioneer 215-DBK SATA DVD drive (IDE mode works fine). Fortunately there is a workaround for this, press the pause key during the POST sequence just before the drive boot sequence starts, let the board pause for a few seconds and then resume. We’ve reported the problem to Gigabyte and a fix BIOS should be up on the support site shortly, so you won’t need to work around if you flash over.

For Clarkdale processors, overclocking and underclocking is made easy thanks to a fully working multiplier control, and the ability to under-volt or over-volt CPUs in the H55N-USB3 BIOS. Memory overclocking is also rather good, all memory sub-timings are available, and each timing has an AUTO parameter which will scale with frequency, requiring no user-intervention to reach high operating speeds.

The Lynnfield story is tempered a little because when used with our i7-875K processor, the current BIOS won’t allow us to set a 23x or 24x multiplier. We’re either confined to 22x and under, or 25x and over. Given the limited cooling options and power delivery limitations we managed a stable 3.66GHz which passed Linpack with all cores loaded. This may not sound like much, but it is better than what can be achieved on boards from ECS and Intel, and betters boards from DFI and Zotac slightly by virtue of being stable at higher memory speeds. DFI limits their board to 180 BCLK, while Zotac have locked VTT to a 1.20V maximum, which will prevent the memory controller from scaling past a certain point.

Other areas of testing were glitch free, and right on the money for things like S3 resume (we tested up to 200BCLK) and plug-in peripheral compatibility.

Gigabyte do bundle quite a bit of software with their boards, and although we don’t find use for much of it personally, we’re happy to report that what you get with the board does work as intended for the most part. One of the glitches we found were with Gigabyte’s overclocking tool called OC Tuner; failing to report the VTT we’d set in BIOS correctly on occasion. Still, we don’t think there will be a huge need for OC Tuner on the H55N-USB3 as on-the-fly overclocking is best left to motherboards that are designed to be used for professional benchmarking purposes and that’s not this board’s intended purpose at all.

The other problem was with some of the custom options of Dynamic Energy Saver which failed to respond to any of the low power changes we made to bus speeds. However, the rest of the phase switching modes work fine, and you can underclock this board rather well if need be via BIOS, so it's not something that we're going to be too harsh about, although we expect software to work as advertised. These problems have been reported back to Gigabyte, who told us a fix should be available shortly.

An extra fan header and extra speed control features would have been a nice touch. Currently, speed control is on offer for the CPU header only. That and the fact that spacing is tight for certain CPU cooler backplates are the only downers we can think of.  We’d possibly like to see some of the voltage ranges on tap for Lynnfield processors tightened up to prevent board failures, although Gigabyte are happy to leave things in the hands of over-current protection to shut the board off if users push too far. We decided to put this to the test and found that the over-current protection does work as intended. Whether or not it’s a global failsafe in the hands of users though, remains to be seen.

Everywhere else, we think Gigabyte’s H55N-USB3 is well-executed enough to become the de-facto choice for a Clarkdale based mini-ITX build, unless you have specific need for out-of-the box RAID which the H55 chipset does not support.

For a look at comparative performance figures, power consumption and overclocking results read on…