After a bit of ballyhoo and a bit more of a delay, NVIDIA is finally ready to launch their competitor to AMD’s triple-monitor Eyefinity technology: 3D Vision Surround.

As a quick refresher, in September of 2009 AMD launched their multi-monitor Eyefinity technology alongside the Radeon HD 5000 series. With Eyefinity AMD could present a Single Large Surface to games and applications, allowing them to draw to 3 monitors as if they were a single monitor. It allowed for computing and gaming at a very wide field of view approaching the limits of human vision.

NVIDIA has previously told us that they’ve been sitting on the concept for some time with no apparent market for it, with the success of Eyefinity and Matrox’s TripleHead2Go finally motivating NVIDIA to move forward with the technology. The result of this delayed plan is an interesting technology that in many ways is NVIDIA’s version of Eyefinity, and in other ways is entirely different. In a nutshell: it’s not just 3D Eyefinity.

This morning NVIDIA is launching their 258.69 beta driver, the first public driver to offer 3D Vision Surround functionality. NVIDIA did not sample this driver to the general press ahead of this launch so we will not be providing a review for today’s launch. We will have our own review in the coming weeks, as we’re still working on acquiring a complete set of 120Hz LCD monitors to properly test both NVIDIA Surround (2D) and 3D Vision Surround (3D).

In lieu of that we have already been provided a technical briefing for the technology which for the time being enables us to answer some of the biggest questions we had about the technology prior to today’s launch.

First and foremost, as we’ve discussed in previous articles, NVIDIA is technically launching two different technologies today. The first is NVIDIA Surround, the name NVIDIA is giving to their Eyefinity-alike 2D multi-monitor technology. The second is 3D Vision Surround, which is the infusion of 3D Vision in to NVIDIA Surround. Admittedly the naming could use some work (“NVIDIA Surround” does not roll off the tongue quite like “Eyefinity”) but it’s fairly straightforward in conveying which one is for 3D. For the sake simplicity in this article, we’ll be referring to the overall technology as NVIDIA Single Large Surface (NVSLS) when discussing matters that apply to both NVIDIA Surround and 3D Vision Surround.

Although NVIDIA may have been sitting on NVSLS for quite some time, the fact of the matter is that by the time they decided to launch it, they were already too far along in the design process of GF100 to do anything about it on the hardware level. Whereas AMD could make hardware changes to facilitate Eyefinity – primarily by enabling more display outputs – NVIDIA could not. This has some drawbacks and some benefits.

GTX 480: Only 2 outputs can be used at once, requiring SLI for NVSLS

In terms of drawbacks, the lack of dedicated hardware means that virtually none of NVIDIA’s cards have enough display outputs for NVSLS. With the exception of a single model of the GeForce GTX 295 that has an HDMI output on the daughter card, 2+ cards operating in SLI are required to take advantage of NVSLS. This is due to the fact that the second card’s display outputs are needed to drive the 3rd monitor. This gives NVSLS a higher setup cost than Eyefinity, which can be done for up to 6 monitors on a single card. Along those lines is NVIDIA’s other current limitation: they can only do 3 monitors right now while AMD can do 6. 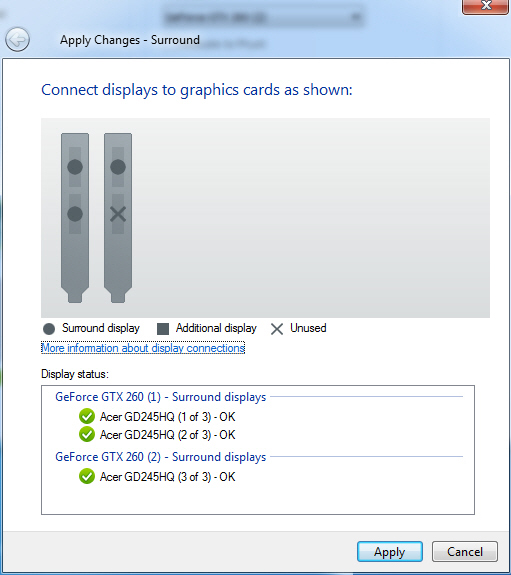 However there are also benefits of NVIDIA’s software implementation. While AMD relied on hardware and limited Eyefinity to the Radeon HD 5000 series as a result, a pure software solution allows for the technology to be backported to older cards. Along with the GTX 400 series, the last-generation GTX 200 series will also be gaining NVSLS capabilities today – this is for both NVIDIA Surround and 3D Vision Surround. There are a couple more limitations at the moment (3-way SLI is not supported on the GTX 200 series) but the fundamental technology is there. Furthermore in this brute-force manner NVIDIA also tidily bypasses any reliance on DisplayPort, so unlike Eyefinity NVSLS will work without an active DP-to-DVI adapter.

The biggest remaining question right now will be whether a pure-software approach differs from AMD’s hardware + software approach in terms of performance and game compatibility. NVIDIA’s own internal benchmarks have a SLI GTX 480 setup beating a CF 5870 2GB setup, but the GTX 480 is already faster than the Radeon HD 5870 so this wouldn’t be wholly surprising. As for compatibility we do know that NVIDIA is still fighting with the issue much like AMD has been, as NVIDIA is suggesting the use of the 3rd party Widescreen Fixer to fix the aspect ratio of several games.

The Next Step: 3D
Tweet
PRINT THIS ARTICLE
Comments Locked