When we looked at the first GTX 480M system, a Clevo W880CU with a  180W AC adapter and an i7-820QM processor, we were curious how long it would take for the high-end notebook vendors to cram two of the GPUs into a chassis. The answer: three months, with AVADirect now selling their X7200 Gaming Notebook. Until now, the largest notebook power adapters we've seen topped out at 250W, and as it's good to have some extra headroom we figured they would need something larger. Turns out we were right, as the new Clevo X7200 ships with the first 300W notebook power brick we've encountered. But this isn't just a quick revamp of the old X8100 chassis; in fact, it has nothing to do with the 18.4" model but instead builds off the older 17.3" D900F platform.

What that means is that besides supporting two GTX 480M GPUs in SLI, you get support for desktop Core i7 CPUs. AVADirect supports processors from the i7-930 (quad-core 2.80GHz) up through the top-of-the-line i7-980X (hex-core 3.33GHz). If you want to shop around, there are also Xeon CPU options available including the W3680 and X5680 at Eurocom, and you can find the same chassis with SLI GTX 470M or SLI GTX 460M, though why you'd spend this much money and not go for the absolute best is an interesting question. Finally, I know lots of people have been less than impressed by Clevo's ultra-expensive notebooks that come with cheap plastic chassis. That's one more area upgraded in the X7200, as the system has aluminum surfaces. It also has two USB 3.0 ports, three USB 2.0 ports, and a variety of other extras. Unfortunately, it looks like the keyboard is the same old (crappy) design and layout, which is unfortunate but not necessarily the end of the world. 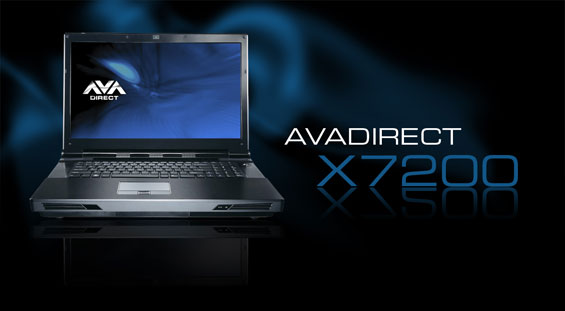 The base price with a single 480M, an i7-930, and 3x2GB RAM (yes, you can save some money if you get 3x1GB, but I'll personally come over and kick your butt if you go that route!) is a hefty $2750, and that's without doing much in the way of upgrades for the storage subsystem! Speaking of which, AVADirect supports three internal 2.5" drives, with RAID 0/1/5 options available. As we're fond of pointing out, a fast SSD is one of the best upgrades you can make to a high performance system, as it makes everything snappier, so let's just go all the way and see where we come out, shall we?

We hopped on the AVADirect configurator and starting putting in all the highest performance options—within reason, so you won't see three 400GB OCZ Vertex 2 SSDs with SandForce-1200 controllers. We put in two 480M GPUs, a 980X CPU, 12GB DDR3-1066 CL7 memory, a 240GB OCZ Vertex 2 as the OS drive, a Seagate 500GB XT hybrid drive for mass storage, and a blu-ray combo drive for good measure. We also added a 3-year extended warranty, because who wants a notebook that costs as much as an inexpensive used car to fail after 18 months leaving you with a 15-pound paperweight? Total damage to your pocket book for such a configuration comes to just $5561.04, plus taxes. Ouch! But maximum performance has never come cheap.

For those that like comparisons, we went to Eurocom's site and put roughly the same options on their Panther 2.0 system. Eurocom does support a fourth hard drive in the optical drive bay, as well as up to 3x8GB (24GB) RAM and Xeon processors. Eurocom also includes an HDMI input standard, and if you're interested in some HD video editing work that could prove very handy. But when you go with the standard options and come up with a price of $7261 USD—$1700 more than AVADirect—it's difficult to see what they're offering that warrants the higher price. If you need a mobile server/workstation, the added cost for more memory and a Xeon CPU might be a good investment, but for a gaming laptop where even 12GB RAM is overkill, we think saving money even on a ~$5000 notebook is the more sensible route.

AVADirect is getting a test system ready for us, and we're excited to see exactly how far they can push mobile performance. Would I buy such a system for personal use? Not a chance! But then I work from home with a potent gaming desktop and I don't need a ton of mobile compute power, so I'm not the target market. Those who are looking for a mobile workstation or perhaps the ultimate LAN party notebook on the other hand have a new DTR to lust after. We should have a system in hand next week, so stay tuned for the full review.