In and Around the BitFenix Shinobi

Like I said, my first impressions of the Shinobi were excellent. While the enclosure is comprised almost entirely of black plastic and black SECC steel, BitFenix was able to produce a very sleek and attractive design that doesn't draw negative attention to itself or its price tag.

The removable front and top panels are both plastic with ventilated grills lining the sides, but BitFenix textures the plastic. Instead of the traditional (and cheap-feeling) matte plastic, the Shinobi's panels use a sort of rubberized soft texture that makes the whole thing look and feel a lot better. Those ventilated strips work both as a means of improving airflow and as an appealing accent that gives the case some character. Finally, the silver BitFenix logo on the front is subdued and subtle enough to add the last bit of identity and polish without looking gaudy.

Everything else is SECC steel, painted black inside and out. Our review unit is the windowed version, and I'm actually impressed by the window on the side of the case. The triangle shape of it keeps in theme with the sharp angles of the rest of the design, but BitFenix opts to use a tinted plastic window. It's an interesting compromise that lets you bling out your build a little bit without overdoing it. Included in the window is a ventilated 120mm fan mount for cooling expansion cards.

The back of the Shinobi is business as usual, again all black, with two rubber-lined grommets for running water-cooling tubing out of the enclosure. A power supply can be installed with the fan oriented down or up; there are screw holes that allow you to flip it if you wish, but there's also a grille with a dust filter on the bottom of the enclosure in case you install the PSU in the traditional orientation. 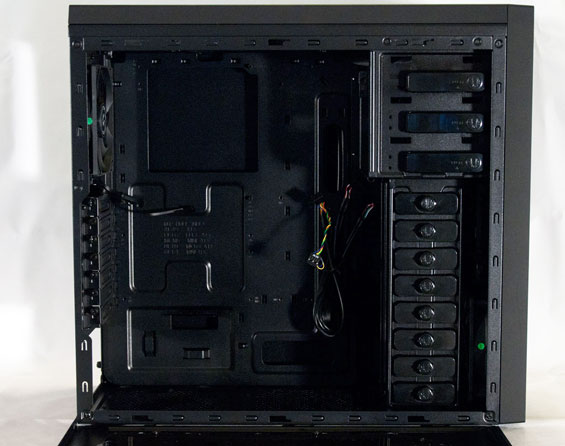 Opening the Shinobi reveals a case with all the modern accoutrement, neatly assembled and arranged to make building a machine inside as easy as possible. The motherboard tray has a spacious cut-out for installing processor cooling, and there are additional holes around the motherboard for routing cables behind the tray. Expansion cards are mounted with thumbscrews, and BitFenix includes individual slot covers as opposed to asking you to remove cut-outs from the back panel. Those slot covers seem like a small deal, but they're an appreciated touch that add value to the case. Finally, the drive bays all use tool-less mounting mechanisms.

Without getting into the assembly, the Shinobi is remarkably welcoming. Some of the enclosures I've had to assemble have been exercises in frustration, but despite being comparatively diminutive the Shinobi features a very spacious interior and the enclosure itself is remarkably light. All the modern features you could ask for internally are accounted for, although an eSATA port or USB 3.0 port in the top port cluster would be appreciated. Still, given everything else BitFenix crams into the Shinobi for $69, it's hard to really complain.