AMD provided us with an A8-3850 CPU and an ASRock A75Pro4 ATX motherboard for the review. Purists might balk at the idea of a 100W TDP processor being used in tests intended to test the HTPC capabilities. However, we have to make do with whatever sample was sent to us. A look at the Lynx lineup indicates that the same product with a 2.6 GHz core clock (A8-3800) has a 65W TDP. I intended to underclock the CPU to 2.6 GHz. However, Llano clock adjustments are a minefield, as Ian points out in his ASRock Extreme6 review. The idle power usage in my testbed was good enough (as we shall see in a later section). My time was better spent debugging the HTPC related issues, and therefore, I didn't take the trouble to underclock.

As soon as I finished setting up the testbed, I found that Blu-rays would play correctly, but local file playback had a host of issues. Noise reduction and cadence detection wouldn't get activated for local files with ESVP on. Turning it off resulted in dropped frames and high load on the GPU. It was turning out to be very similar to the DDR3 based MSI 6450 we had reviewed earlier.

Being a new platform, BIOS updates for the ASRock A75 Pro4 were flying thick and fast. To confound the issue, different BIOS versions had different behaviors with the default UEFI settings. With some BIOS versions, even Blu-ray playback had the same issues as local files.

After going back and forth with AMD about the local file playback issue, we discovered that the BR softwares use a proprietary API for video playback from discs with DRM. For local file playback, most players use the DXVA API. These are different code paths and may result in different GPU utilization numbers.

Couple of days back, AMD finally discovered that the BIOS was forcing the shared GPU memory to an absurdly low value. The GFX memory settings forced by the user in the BIOS were also not honored. There was an update to the BIOS to fix this and set the default GFX memory to 512 MB. After this, both Blu-ray and local file playback improved enough for us to be able to get down to exhaustive testing. AMD did acknowledge that there exists an issue with local file playback having higher than normal GPU utilization, but that hasn't been resolved as yet.

The table below lists the components in our Llano HTPC testbed.

The most important part of the testbed from a reviewer's perspective was the open air case from Antec. I had used the Antec VERIS Fusion MAX for the NAS / Fall 2010 HTPC testbed. The case was a HTPC beauty, and kept my lab neat and orderly (instead of having components all over the table and the floor). However, the fact that I had to open the case to swap PCI-E cards in and out made it slightly impractical. 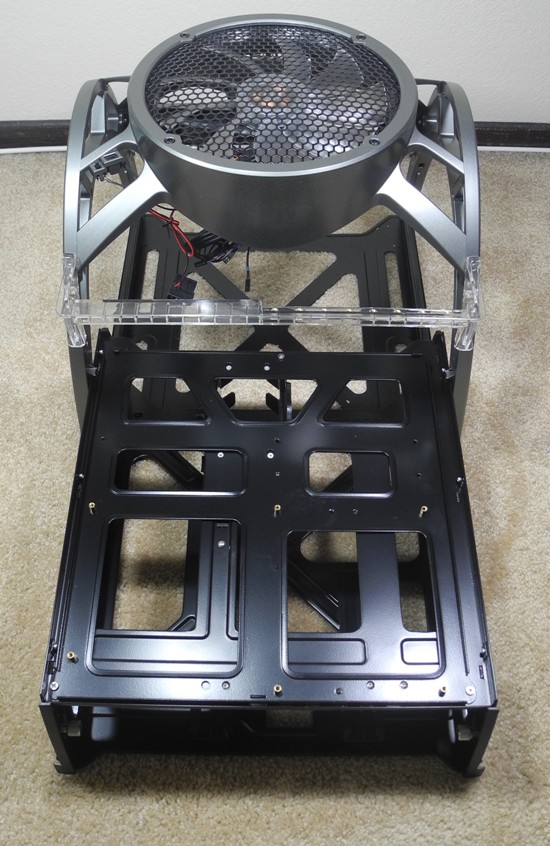 The Antec Skeleton is a full ATX open air enclosure, and what really sealed the deal for me was the fact that the motherboard was easily accessible, and upto 4 SATA drives could be mounted on the side. It also has support for upto three 11" PCI-E cards. There are Quick Relase 5.25" and 3.5" bays, but I chose to mount only one optical drive in the 5.25" bay, leaving the rest open to route the cables. The four externally mounted 3.5" bays can also be used to mount 2.5" drives, as I did with the OCZ Vertex 2 SSD in the gallery below.

I keep moving my testbeds back and forth between the home theater setup with the bitstreaming / 24 Hz capable gear and the test lab upstairs with the ordinary monitors (so as to not disturb my family's usage of the HT gear). In the Antec Skeleton case, the grips on the top railing (on either side of the top fan) can be used as handles. This makes it very easy to carry around.

The fancy LED lights on top around the huge fan make it look very attractive and it is sure to turn heads.
The last thing was from an OC / gaming enthusiast viewpoint and not really from a reviewer's perspective! 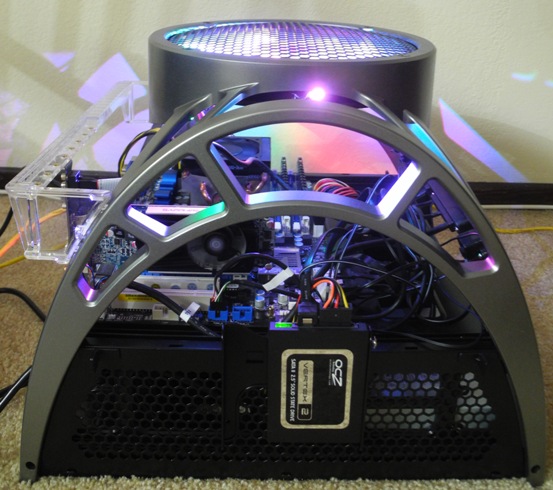 Let us now proceed to the actual HTPC benchmarking of the Llano.