Today, we will be looking at the ASUS P8P67. Although the board has been available for some time, this is one of ASUS' cheaper full size ATX offerings. Considering it has a price tag of $155 ($140 with rebate), it offers quite a few useful features such as DIGI+ VRM, BT GO! (Bluetooth), a total of four USB 3.0 ports, and Quad-GPU CrossFireX support.

Even though the P8P67 does not offer as many features as the more expensive models in this range, or even some of the optional extras in the box which other boards come with in the same price range, it does perform better than you may have initially thought. The biggest complaint we have is the second PCIe x16 slot only operates in x4 mode, which does impact multi-GPU performance. The board's power  consumption is also higher than other motherboards we have tested. Overall, I would say this motherboard is a good contender in the sub $160 price range but some of the additional extras which come with the ASRock P67 Extreme4 for example may be enough to sway people towards that board instead.


ASUS has decided to go with a blue and black color scheme, which is built upon a black PCB. The black and blue theme carries its way throughout the motherboard on to the expansion slots, RAM slots and the heat sinks as well.

Just like all of the latest ASUS range, their latest TPU (TurboV Processing Unit) and EPU (Energy Processing Unit) processors are on this motherboard. The EPU chip is designed to analyze the actual CPU loading and dynamically regulate the various system power saving and performance parameters in real time. By doing this, it creates an optimal energy saving configuration. The TPU takes care of the system performance - it automatically raises the systems clocks to provide the extra grunt whenever it is required and it also relieves parts of process-intensive tasks from the CPU.

Just like most motherboard manufacturers of the modern age, ASUS has designed the slot layout fairly well. With a GPU, or even two, you will still have a PCIe x1 slot available. They have also allowed for a two slot gap under the GPU which will allow the top card to breathe a little better when using a dual GPU configuration. Unfortunately, you will only be able to use one PCIe x1 slot when you have a dual slot graphics cards. 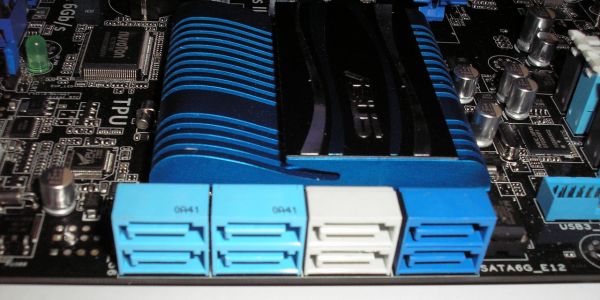 The P8P67 has a total of four SATA 6 Gbps connections available; however only two of them allow for a RAID array. The navy blue ports, which are on the Marvell controller, do not have RAID support whereas the gray PCH ports feature RAID 0, 1, 5 and 10. The four light blue ports are SATA 3 Gbps.

The back panel contains two PS/2 connectors, a SPDIF output, a total of six USB 2.0 and two USB 3.0 ports. A Firewire port is included as well as the built-in Bluetooth. To finish off, there is a single gigabit Ethernet port and the typical audio jacks.