Everything But the Keyboard

When I unboxed the Acer TravelMate 8481T I was actually pretty impressed. Acer's notebooks admittedly tend to err more towards the bargain basement set, and build quality and design have often suffered for it. Even the TimelineX 3830TG initially seems interesting and even like quite a bargain, right up until you realize how much the hardware has to throttle performance due to Acer cramming too much in a small space.

So imagine my surprise at discovering a sleek ultraportable with an almost entirely brushed aluminum shell. It's frankly both incredibly attractive and incredibly sturdy, and there are only two giveaways that it's an Acer notebook: the discreet silver logo on the cover (along with their "Signal Up" logo), and the keyboard forged from the hottest fires of hell itself, damned to endlessly roam the earth bringing woe and misery to typists everywhere. But we'll get to the keyboard soon enough.

Acer's more industrial-style design is a welcome change of pace on the TravelMate 8481T, with plastics seldom employed and the only gloss being the silver screen hinges and the logo on the lid. Acer has produced a notebook that's attractive and functional, and it feels remarkably sturdy to boot. The body doesn't bend or flex, and there's even a 2.5" drive bay (although in our review unit it's unoccupied and lacks the proper connectors due to the onboard SSD). Some people may not like the way the battery bulges out of the bottom, but that kind of design has honestly never bothered me that much (I prefer the incline it creates for the keyboard) and as I said before, it pays off elsewhere. 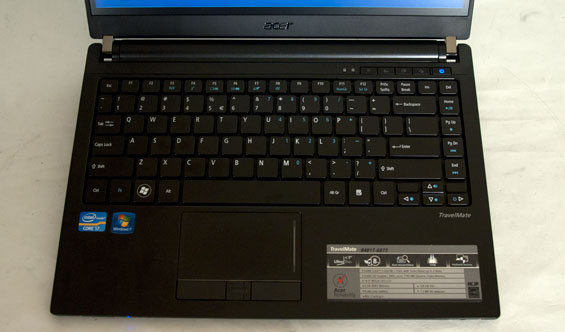 Unfortunately, despite having produced an attractive and understated notebook, and even managing to produce an excellent touchpad with discrete buttons instead of a single rocker, Acer has gone and fouled things up by using their old "floating island" style keyboard. It's been a long time since I've had an opportunity to rant about this design, but know that my hatred for it runs deep. The flat, mushy keys absolutely ruin the user experience, and it's worlds away from the improved chiclet-style keyboard you'll find on modern Acer consumer notebooks. Even without the flex commonly seen on their consumer models, the keys feel cheap and they can easily pop off; travel is limited and the flat tops don't give a clear delineation between the keys. While Acer's keyboard layout is excellent, typing on it is a joyless experience and for me it actually sinks the entire thing (though to be fair I'm very particular about keyboards).

This is the first Acer notebook I've had in for testing where I felt like I wouldn't mind owning it...and then I tried typing on it. There isn't enough hyperbole in the world to adequately describe my contempt for this keyboard design. Some people might not be as demanding, but those same people probably don't write lengthy articles on a regular basis. If you're a student doing term papers, it's difficult to imagine this being a comfortable keyboard; you can use it if you have to, but try a Dell Latitude, ThinkPad, or even a MacBook Pro and I defy you to come away thinking this is better in any way.

That's a shame, too, because as I said, this is otherwise a pretty ideal little road warrior of a notebook and would be perfect for users like me who need something thin and light to write on, take notes, and so on. This should be excellent for business users and word processors, but what good is it if it's irritating to type on? If you don't want to use your notebook, you'll do anything you can to make sure you don't have to. I'm not personally an Apple fan, but they understand one vital tenet of design: user experience is everything, and if nobody wants to actually use your product they aren't going to buy it.

What's really weird is that so many of Acer's products are built to hit the lowest price point possible, and so we can sort of shrug and say, "Yeah, but at least it's inexpensive." The TravelMate is an upscale laptop in every other way, but it keeps with the tried and false keyboard style. When you're building a business-class laptop and improving the chassis and overall build quality, how does the keyboard get left out? Okay, enough about the keyboard; let's see how the TravelMate 8481T otherwise performs.