Here's a prickly subject if ever there were one: while with keyboards you could reasonably argue for the superiority of using mechanical switches over traditional rubber-dome membrane keys, mice are much, much more a matter of preference. A mouse could have all the features you're looking for, but if the grip isn't right or the texture makes you hand clammy the whole enterprise can be a bust. Understanding how delicate the balancing act of a good mouse can be, Corsair has come up with matching mice for their new gaming keyboards.

The new Vengeance M60 is geared for FPS players with an innovative "Sniper" button while the M90 targets MMO players who'll use as many configurable buttons as they can find. In terms of styling and intended use, the M60 theoretically should be paired with the K60 keyboard while the M90 goes with the K90, though you can obviously mix and match as you see fit. The real question is how well they actually work in practice.

While Corsair's Vengeance keyboards had a pretty obvious progression, with the K90 being almost directly superior to the K60, the mice are definitely different creatures, sporting very different features and different grips. The only commonality between the two lies in the sensors (both use lasers rated for up to 5700dpi) and the ability to adjust sensitivity between three settings on the fly using Corsair's Dashboard software.

They also come with different price tags, though the difference isn't as great as the keyboards: the FPS-oriented M60 runs $59, while the MMO-oriented M90 clocks up at $69. These are fairly high prices but still essentially comparable to similar products from other vendors (and actually substantially cheaper than a lot of Razer's offerings). 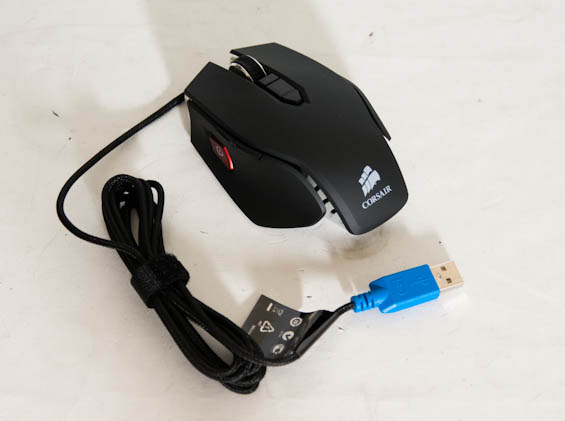 The Vengeance M60 sports the standard mouse button configuration (left and right, middle mouse on the mouse wheel) along with back and forward buttons on the left side. Corsair's innovation here is the "Sniper" button, the big red button on the left side that, while held, drastically reduces the mouse's sensitivity to allow for more precise aiming. Below the mouse wheel is the mouse sensitivity indicator along with the sensitivity adjustment buttons, but it bears mentioning that all of these buttons can be reconfigured in Corsair's software. The underside of the M60 also features something the M90 lacks: three removable weights. 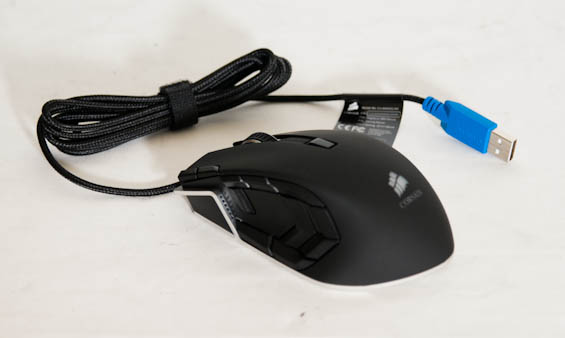 For the Vengeance M90, Corsair ditches the open-bodied grip and substantially changes the left side of the mouse. The sensitivity buttons are relocated to the top left next to the left mouse button, and then the thumb grip region includes a staggering nine configurable buttons. This is very different from the Razer Naga, which has twelve buttons arranged in a three-by-four grid; Corsair has essentially designed the M90 to have a button within range no matter where you click.

Like the M60, all of the M90's mouse buttons are configurable, and you can even configure a button with the M60's "Sniper" function. With the M90 you also gain a toggled backlit logo under the palm, but you lose the adjustable weight.

Finally, both mice come with braided cables, and neither comes with a software disc: you'll have to download Corsair's Dashboard from their website. It's probably just as well; I can't remember the last time I actually needed a driver disc and didn't just download the most recent drivers.