NZXT Phantom 820 Case Review: Everything, Everything

NZXT is an interesting manufacturer. Each company that designs and manufactures cases has their strengths and weaknesses, things they're good at and things that need work, but NZXT is unique in that they're very closely related to iBuyPower (one of the biggest system building boutiques and one that's starting to threaten established brands) and tend to vend some of the most cost effective enclosures to boutiques in general, for better or worse.

Our experiences with NZXT have been mixed. The H2 when it was released suffered from a serious design flaw that drove up internal thermals (an unmarked revision was silently released later that largely resolved those problems), and the Switch 810 was a good but not great enclosure that couldn't quite live up to its promise. But today NZXT is launching the Phantom 820, a case aimed squarely at the top end of the case market where stalwarts like the Thermaltake Level 10 GT, Corsair Obsidian 800D, and SilverStone FT02 reside. It has a lot to live up to, but most impressively of all...it might actually do it. 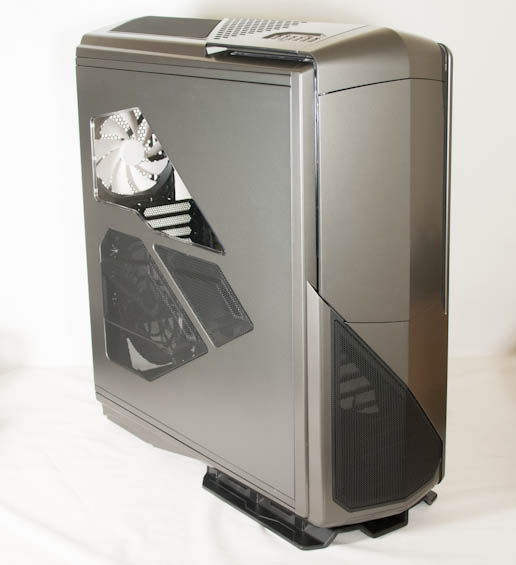 I'll get this out of the way: the Phantom 820 is not coming cheap. NZXT is listing an MSRP of $249, placing it squarely into competition with the highest end enthusiast cases, and it's a pretty bold move from a company that's usually been more about raw value than premium gear. I'm of two minds when it comes to this decision; I think it's a good choice for the company since price is often the best way to give a premium product that extra kick (just ask Apple), but it's ultimately bad for the end consumer who wants and should get great products at reasonable prices.

When I spoke to my rep at NZXT he was very bullish about the Phantom 820 and it's not hard to see why. While Taiwanese case designers have a tendency to try to throw in everything but the kitchen sink (see NZXT's own Switch 810) and call it a product, the Phantom 820 is a different beast. This is a feature rich case, but a lot of the features that have been incorporated are done intelligently. The integrated fan controller in particular is an incredibly slick design that's easily the equal of many entry-level fan controllers; the lack of analog adjustment is offset somewhat by having five different steps, ranging from off to full bore.

I'm also keen to point out that NZXT included an SD card reader; SD cards are pretty much the standard these days, yet for some reason they're seldom integrated in modern case designs. The convenience is appreciated tremendously.

Finally, the Alienware-style LED lighting system is a nice touch and can be disabled entirely if you so choose; otherwise you can turn a dial inside the front door to change the color to whatever you like, and you can toggle between enabling and disabling different lighting zones on the case.