A Post about Removable Storage, Removable Batteries and Smartphones 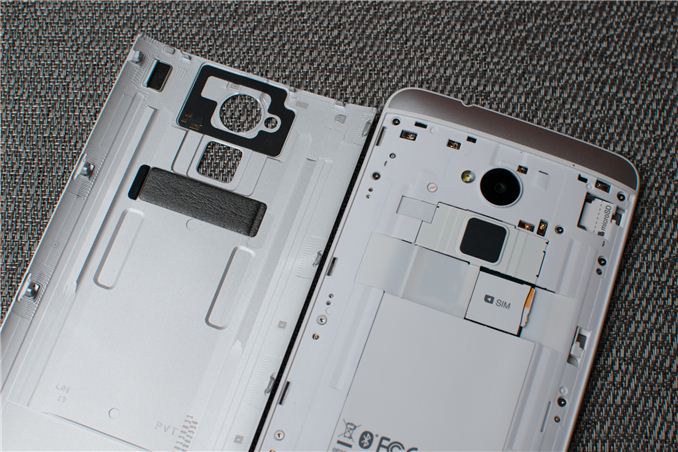 There's been a lot of talk lately about our position on removable storage and removable batteries in smartphones. Most of the discussion has centered around what we've said in podcasts or alluded to in reviews, so we figured it's a good time to have the complete discussion in one central location.

Let's get through the basics first:

All else being equal, removable storage and user replaceable batteries aren't inherently bad things. In fact, they can offer major benefits to end users.

The key phrase however is "all else being equal". This is where the tradeoff comes in. On the battery front, the tradeoff is very similar to what we saw happen in notebooks. The move away from removable batteries allows for better use of internal volume, which in turn increases the size of battery you can include at the same device size. There are potential build quality benefits here as well since the manufacturer doesn't need to deal with building a solid feeling removable door/back of some sort. That's not to say that unibody designs inherently feel better, it's just that they can be. The tradeoff for removable vs. integrated battery is one of battery capacity/battery life on a single charge. Would you rather have a longer lasting battery or a shorter one with the ability the swap out batteries? The bulk of the market seems to prefer the former, which is what we saw in notebooks as well (hence the transition away from removable batteries in notebooks). This isn't to say that some users don't prefer having a removable battery and are fine carrying multiple batteries, it's just that the trend has been away from that and a big part of the trend is set based on usage models observed by the manufacturers. Note that we also don't penalize manufacturers for choosing one way or another in our reviews.

The tradeoffs are simple with an internal battery, the OEM doesn't need to include a rigid support structure on the battery to prevent bending, and doesn't need to replicate complicated battery protection circuitry, and can play with alternative 3D structures (so called stacked batteries) for the battery and mainboard as well. Personally, I'd rather have something that lasts longer on a single charge and makes better use of internal volume as that offers the best form factor/battery life tradeoff (not to mention that I'm unlikely to carry a stack of charged batteries with me). It took a while for this to sink in, but Brian's recommendation to charge opportunistically finally clicked with me. I used to delay charging my smartphone battery until it dropped below a certain level and I absolutely needed to, but plugging in opportunistically is a change I've made lately that really makes a lot of sense to me now.

The argument against removable storage is a similar one. There's the question of where to put the microSD card slot, and if you stick it behind a removable door you do run into the same potential tradeoff vs. build quality and usable volume for things like an integrated battery. I suspect this is why it's so common to see microSD card slots used on devices that also have removable batteries - once you make the tradeoff, it makes sense to exploit it as much as possible. 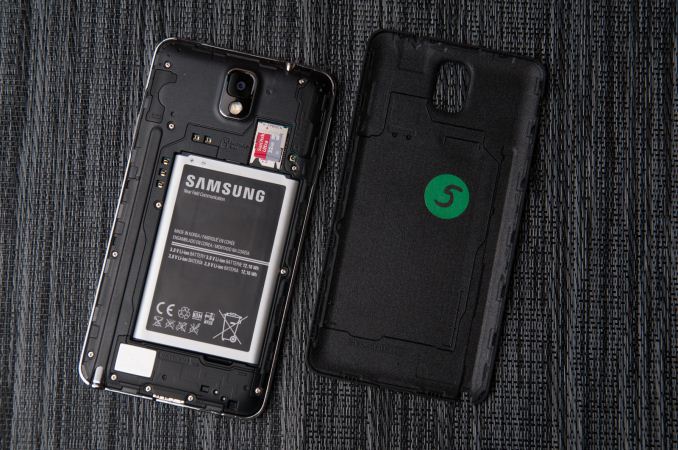 There's more to discuss when it comes to microSD storage however. First there's the OS integration discussion. Google's official stance on this appears to be that multiple storage volumes that are user managed is confusing to the end user. It's important to note that this is an argument targeted at improving mainstream usage. Here Google (like Apple), is trying to avoid the whole C-drive vs. D-drive confusion that exists within the traditional PC market. In fact, if you pay attention, a lot of the decisions driving these new mobile platforms are motivated by a desire to correct "mistakes" or remove painpoints from the traditional PC user experience. There are of course software workarounds to combining multiple types of storage into a single volume, but you only have to look at the issues with SSD caching on the PC to see what doing so across performance boundaries can do to things. Apple and Google have all officially settled on a single storage device exposed as a single pool of storage, so anything above and beyond that requires 3rd party OEM intervention.

The physical impact as well as the lack of sanctioned OS support are what will keep microSD out of a lot of flagship devices.

In the Android space, OEMs use microSD card slots as a way to differentiate - which is one of the things that makes Android so popular globally, the ability to target across usage models. The NAND inside your smarpthone/tablet and in your microSD card is built similarly, however internal NAND should be higher endurance/more reliable as any unexpected failures here will cause a device RMA, whereas microSD card failure is a much smaller exchange. The key word here is should, as I'm sure there are tradeoffs/cost optimizations made on this front as well.

The performance discussion also can't be ignored. Remember that a single NAND die isn't particularly fast, it's the parallel access of multiple NAND die that gives us good performance. Here you're just going to be space limited in a microSD card. Internal NAND should also be better optimized for random IO performance (that should word again), although we've definitely seen a broad spectrum of implementation in Android smartphones (thankfully it is getting better). The best SoC vendors will actually integrate proper SSD/NAND controllers into their SoCs, which can provide a huge performance/endurance advantage over any external controller. Remember the early days of SSDs on the PC? The controllers that get stuffed into microSD cards, USB sticks, etc... are going to be even worse. If you're relying on microSD cards for storage, try to keep accesses to large block sequentials. Avoid filling the drive with small files and you should be ok.

I fully accept that large file, slow access storage can work on microSD cards. Things like movies or music that are streamed at a constant, and relatively low datarate are about the only things you'll want to stick on these devices (again presuming you have good backups elsewhere).

I feel like a lot of the demand for microSD support stems from the fact that internal storage capacity was viewed as a way to cost optimize the platform as well as drive margins up on upgrades. Until recently, IO performance measurement wasn't much of a thing in mobile. You'd see complaints about display, but OEMs are always looking for areas to save cost - if users aren't going to complain about the quality/size/speed of internal storage, why not sacrifice a bit there and placate by including a microSD card slot? Unfortunately the problem with that solution is the OEM is off the hook for providing the best internal storage option, and you end up with a device that just has mediocre storage across the board.

What we really need to see here are 32/64/128GB configurations, with a rational increase in price between steps. Remember high-end MLC NAND pricing is down below $0.80/GB, even if you assume a healthy margin for the OEM we're talking about ~$50 per 32GB upgrade for high-speed, high-endurance internal NAND. Sacrifice on margin a bit and the pricing can easily be $25 - $35 per 32GB upgrade.

Ultimately this is where the position comes from. MicroSD cards themselves represent a performance/endurance tradeoff, there is potentially a physical tradeoff (nerfing a unibody design, and once you go down that path you can also lose internal volume for battery use) and without Google's support we'll never see them used in flagship Nexus devices. There's nothing inherently wrong with the use of microSD as an external storage option, but by and large that ship has sailed. Manufacturers tend to make design decisions around what they believe will sell, and for many the requirement for removable storage just isn't high up on the list. Similar to our position on removable batteries, devices aren't penalized in our reviews for having/not-having a removable microSD card slot.

Once you start looking at it through the lens of a manufacturer trying to balance build quality, internal volume optimization and the need for external storage, it becomes a simpler decision to ditch the slot. Particularly on mobile devices where some sort of a cloud connection is implied, leveraging the network for mass storage makes sense. This brings up a separate discussion about mobile network operators and usage based billing, but the solution there is operator revolution.

I'm personally more interested in seeing the price of internal storage decrease, and the performance increase. We stand to gain a lot more from advocating that manufacturers move to higher capacities at lower price points and to start taking random IO performance more seriously.