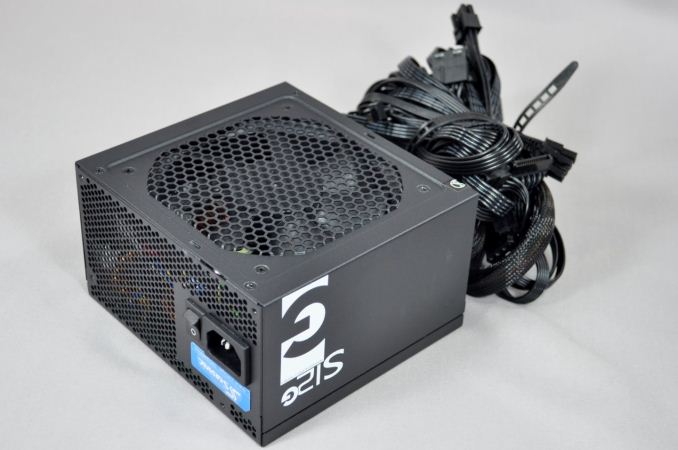 The Seasonic S12G sports a small, typical ATX-sized (140mm) chassis that has been sprayed with a matte black paint. Some effort has been made to improve the appearance of the power supply, albeit not all of the measures can be considered successful. Seasonic uses all-black ribbon cables, with the exception of the 24-pin ATX cable that uses typical color-coded wires and sleeving. A blue sticker has been placed on the rear of the unit, where it will be visible from the back of a case once the PSU has been installed. Oddly enough however, the company sprayed the series logo in white on the right side of the chassis, where it will be facing the right side panel of a case. It goes without saying that it will not be visible inside the vast majority of the cases currently in the market. On the other hand, the sticker with the specifications of the PSU has been placed on the left side of the chassis. No effort has been made at all to enhance the top side of the chassis visually, so in a bottom-mounted location users with case windows will simply see a black surface. 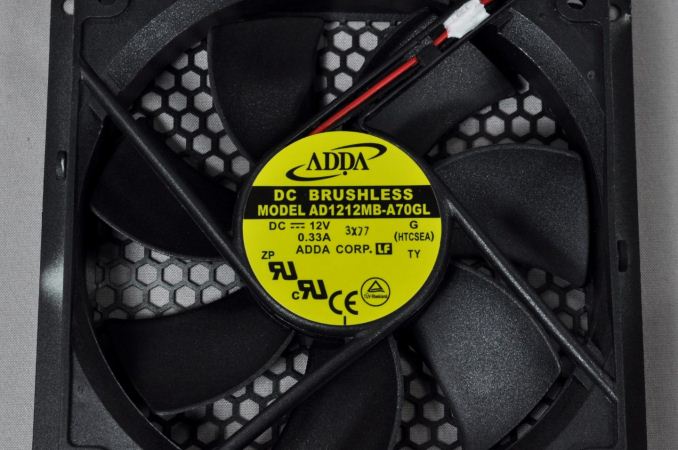 We were surprised the instant that we opened up the chassis of the S12G 650W unit. The unit is cooled by an ADDA AD1212MB-A70GL fan, unlike the majority of Seasonic's other models that use SanAce fans. The particular fan model is high quality, featuring a "Hypro" liquid bearing and with a maximum speed of 2050 RPM, yet it is no SanAce. When you have to compete in the mainstream market and even a few dollars can make an immense difference on sales, you have to keep the retail price as low as possible, which is most probably why Seasonic went with the ADDA fan for the S12G. Note also that as this unit has no fanless mode, it does not require a fan with extraordinary specifications (e.g. a very low starting voltage).

It is obvious that the OEM behind the S12G is Seasonic, as the company designs, manufactures, and markets their own units. We spot four heatsinks; the smallest one handles the rectifier bridge, the one near the edge of the PCB cools the active PFC components, and those on each side of the main transformer handle the inversion and conversion transistors of the primary and secondary stage respectively. The input filter begins on the PCB attached to the back of the receptacle, but continues on the main PCB until the input of the rectifier bridge. We spot a total of six Y capacitors, two X capacitors, and two filtering inductors, which form an excellent intake filter.

In terms of component and build quality, Seasonic does not let us down. The primary capacitor and most of the smaller capacitors are supplied by Nippon Chemi-Con, with some Rubycon electrolytic capacitors after the secondary side heatsink as well. Everything is well shielded and secured with glue, ensuring the mechanical cohesion of the unit. The inductors are glued and also tightened with cable ties, in order to minimize the chance of vibration-generated noise (also known as "coil whine"). The quality of the soldering is very good, well above what we would consider average. There are a few spots where excessive solder has been applied, but that hardly is worth commenting on in a $90 MSRP PSU.