While Pebble arguably resurrected the wearables market in 2013, the biggest year yet was 2014. Many products (and several whole platforms) became consumer available. Many of these devices bring new innovations to the table to expand wearables from simple pedometers to full blown smartphones on your wrist and comprehensive health trackers. It is impractical to do a full review of each launch in the past year, so here are some wearable product highlights from 2014 to lay the foundation for future device reviews in 2015.

Arguably the biggest wearable launch this year was its very first platform OS. Android Wear aims to be the Windows of the smart watch market, enabling device makers to create devices without significant software investment by loading Android Wear. This strategy clearly worked well for Microsoft with PCs and Google with smartphones.

Android Wear is a wearable tailored version of the base Android OS, not a new creation. This provides immediate benefits as device makers can bring up wearable hardware with all the knowledge gained from previous smartphone efforts. As Android (without heavy modification) is not an embedded microcontroller OS, Android Wear devices rely on full featured application processors such as the Cortex-A or MIPS variety, not Cortex-M. Android app developers can create and deploy Android Wear apps using nearly all of the same APIs from traditional Android development. Differences between traditional Android and Android Wear are detailed in the development assistance provided by Google.

Currently, the foundation of Android Wear is not running apps. Rather, it is pairing with an Android 4.3+ device and providing Google Now features. Activating your Android Wear device provides the same list of cards on your wrist that are available in the Google Now page of your Android phone, and they are acted upon and dismissed in a similar way. How much you like Android Wear comes down to how much you like Google Now. “OK Google” voice activated assistance is always on when the device is not sleeping, and bringing a device out of sleep is done via motion detection. Moving and twisting your arm from any position to the position needed to view the watch face activates an Android Wear device. If the device is already in this position and has gone to sleep, you can tap or press a button to wake the device. Because the majority of functionality is provided by Google Now and the rest by loading apps, each Android Wear device launched provides a nearly identical experience. Thus, purchasing decisions between Android Wear devices fall entirely into the hardware camp. This is not something to be quickly disregarded or dismissed, as the selection of wrist hardware is a very personal choice. A watch’s band material, size, and styling can make or break a device.

For example, the Moto360 I have been using is entirely black with a black leather band. To be honest, I do not like the styling as I think it looks childish. The leather band also absorbs water which limits how I use the device. However, surveying my friends and family, many of them do like the all black and leather styling. To address this, Motorola sells many style variants. Personally, I would purchase the light shade stainless steel and wear that Moto360 a lot more.

Six Android Wear devices have launched and are available via the Google Play Store and some other retailers.

Android Wear launched focused on smart watch features alone. However, in an October update, Google added support for heart rate monitoring, Sensor Fusion / GPS, and music storage and playback via Bluetooth Audio. This provides the framework for the moving (running, cycling, etc.) use case, but Google relies on app support for moving software. In my personal experience, running app support is rough around the edges. For example, the premier running app highlighted by Google (Runtastic) does not support the heart rate monitor nor does it work disconnected from your phone, mostly defeating the experience.

New hardware has also launched since Android Wear’s introduction. The Sony SmartWatch 3 launched in October alongside the new GPS support. Additionally, there have been several OS updates including a Lollipop update landing on my Moto360 very recently (ironically before my Galaxy S4 has Lollipop).

This is possibly the strongest aspect of Android Wear. It is a full blown smartphone OS offering 3rd party app support, continually developed and improved by a company (Google) that is not the hardware vendor. Updates are frequent and quickly deployed. Google is building a foundation of software and hardware to foster an ecosystem. Right now it is far from perfect, but the good news is that if you buy an Android Wear device today, that device will likely be become significantly different and better over time via software and apps updates.

While Samsung is traditionally thought of as a huge Android smartphone vendor, Samsung diverges from Google when it comes to wearables with some interesting results. When Samsung was developing their first wearable, the Galaxy Gear, in 2012 and releasing it in 2013, Android Wear did not exist. Rather than wait for Google (as Samsung did when Google was rushing to release Android 3.0 for tablets to catch up to Apple and the iPad), Samsung went ahead and forked Android themselves. We reviewed the Galaxy Gear shortly after its launch.

This is important history, as it explains the state of things today and throughout 2014. As Samsung did not wait for Android Wear, their first device contained features Samsung defined, such as camera and IR support, without collaborating with Google. Thus, Samsung wearables were in an interesting position of being off-platform from Google and thus not benefiting from Google’s ecosystem efforts, while also containing features and innovations that could not be folded into Android Wear. For example, if Samsung updated the software on the Galaxy Gear to Android Wear, the camera would stop working.

This is both a good and bad position. Samsung has now transitioned most of their smart watches to their own operating system, Tizen, so they can innovate without needing to coordinate with Google. However, apps designed for Android Wear of course cannot run on Samsung’s Tizen smart watches. Thus, Samsung is currently in its own category. Samsung and Google are now in a race to see who can build an ecosystem faster.

If Samsung can win, they do not have motivation to transition to Android Wear. If Google wins and adds in features that Samsung’s smart watch build of Tizen has, then Samsung should likely migrate their devices over to Android Wear. This will be an interesting power struggle to observe in 2015. It should also be noted that Samsung does make one Android Wear device, the Samsung Gear Live, likely to hedge its bets.

Samsung’s devices and OSes are listed below in the order they were released:

Every device other than the Gear Fit are smart watches. The Fit instead focuses mainly on fitness but also has some smart watch functionality. Technically the category is “Fitness Wristband”. In fact, the Gear Fit hardware is similar to the Microsoft Band that we will cover later.

In 2014 Samsung launched a very interesting device, the Gear S. This is effectively a smartphone on your wrist, as it is the first wrist worn wearable to include cellular (3G) and WiFi. It even has a SIM card slot. This is a clear example of where Samsung has diverged from Android Wear features. It also contains a unique curved Super AMOLED display. These curved displays have dubious value in a smartphone but are more obviously useful on a wrist worn device. 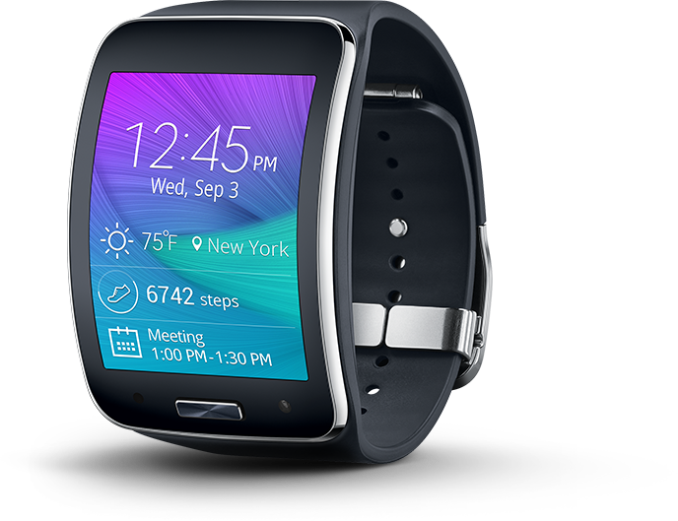 With cellular connectivity, the Gear S sits alone as the only wearable you can wear without a connected smartphone on a cycling, canoeing, or running trip yet still make an emergency call or sync up with friends. Samsung also collaborated with Nike to bring the very popular and feature rich Nike+Running app to their Tizen based smart watches. Therefore, from a checkbox perspective, the Gear S might be the most interesting fitness and smart watch wearable launched in 2014. However, a full review is needed to ascertain how well Samsung executed on the entire experience.