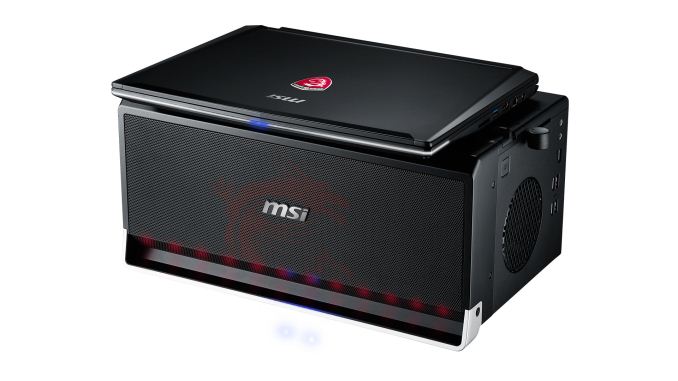 One of the very interesting looking laptops from MSI is their upcoming GS30, which carries on the thin and light theme of the GS series but extends that down into a 13.3” chassis. The core laptop uses a Crystalwell i7-4870HQ processor, which means it should have decent integrated graphics performance but nothing earth shattering. Along with the Haswell-based CPU comes support for up to 16GB of DDR3L memory, RAID SSD storage, and a 13.3” 1080p anti-glare IPS display. All of that is well and good, but where things get interesting is when we get to the expansion dock.

Similar to the Alienware 13, the GS30 will have support for an expansion dock that supports full size desktop GPUs. MSI says it should work with all desktop GPUs, from lower end models all the way up to GTX 980, and Titan/Z/Black, as well as various AMD GPUs. The dock uses a proprietary connector, and the laptop sits on top of the dock rather than interfacing through a cable. The dock isn’t just for a discrete GPU either, as it supports an additional 3.5” hard drive, Killer Gigabit Ethernet, and it includes two speakers. I’m not convinced about the need for the speakers or networking support, especially considering the laptop already has a Gigabit Ethernet jack, but the additional four USB 3.0 ports certainly don’t hurt.

If you’re curious how MSI is interfacing with all of these extra devices and whether there will be sufficient bandwidth, the answer is that the dock uses a full x16 PCIe 3.0 based connector. That means not only is there plenty of bandwidth, but the discrete GPU will also be able to run at maximum performance. Interestingly, MSI noted that with certain high-end GPUs (e.g. Titan class and above), there may be a minor drop in performance on the laptop unless you also connect the laptops AC adapter. The dock itself comes with a 450W PSU, which should be plenty to run any GPU, HDD, USB peripherals, and still leave sufficient room to power the laptop, but until we can do some actual testing with the final hardware it’s not clear why there would be a need for the added power.

The GS30 Shadow is definitely one of the more interesting laptops we’ve seen, and for those that don’t need to have a ton of gaming power on the go it offers a nice blend of mobility with the option to hook up to a dedicated display and GPU at home for serious gaming. Note also that the GS30 cannot “hot-dock” – you have to power down the system before undocking, or there could be problems. Also, when docked the laptop’s internal display is disabled (for now?) and only an external display connected to the discrete GPU can be used.

Pricing and availability have not been announced yet, but at least the latter should be sooner rather than later. It’s also not clear whether the GS30 Shadow will always be sold as a package that includes the GPU docking bay, or if that will be a separate device. Selling the dock as an accessory would likely make the most sense, as there may be users that don’t care for the dock but otherwise like the GS30 laptop. We’ll have a full review once the laptop and dock are ready for retail customers. This is clearly a shot across the bow of Alienware, and while it’s too early to declare a victor and both offerings have their pros and cons, it’s shaping up to be a very interesting year for laptops.