Both the selection and the testing of a fan can be a rather complicated matter. Even if someone knows the exact performance curve of a fan and can make an educated assessment regarding the airflow impedance, parameters such as the quality and noise come into play as well. Through our fan reviews, we will attempt to simplify some of these parameters and assist you with making a proper selection. Today we are looking at several of Corsair's high-end fan offerings in the 120mm and 140mm size from their SP (Static Pressure), AF (High Airflow) and LED ranges.

As this is our first proper fan review, our primary focus is to showcase and explain the differences between different kinds of fans, as well as to begin the composing of a performance database. Corsair is our company of choice for our first review, as they offer a variety of cooling fans wide enough and designed for different applications, permitting us to easily showcase the difference between fan designs. Corsair supplied us with six different fan products, which are:

Theoretically Corsair's offerings end up with many degrees of freedom - select AF or SP, select 120mm or 140mm, then select Performance or Quiet, the LED or no LED. This could lead up to 16 different combinations (colors of LED not withstanding), although Corsair picks and chooses so only a few of these to produce.

We should start by immediately mentioning that the LED fan versions are not of equal design and performance as the standard versions. We will examine these differences thoroughly, but take care not to confuse the standard with the LED versions of each fan. For example, the AF140 Quiet Edition and the LED version (the AF140 LED White Quiet Edition) do share a similar product number but the non-LED version ends up having significantly better performance specifications.

The LED versions of the AF140 and the SP140 both have black plastic frames with narrowed bezels and semi-transparent blades with a "frost" texture. The wiring and the connector, as well as the provided screws, are all black. 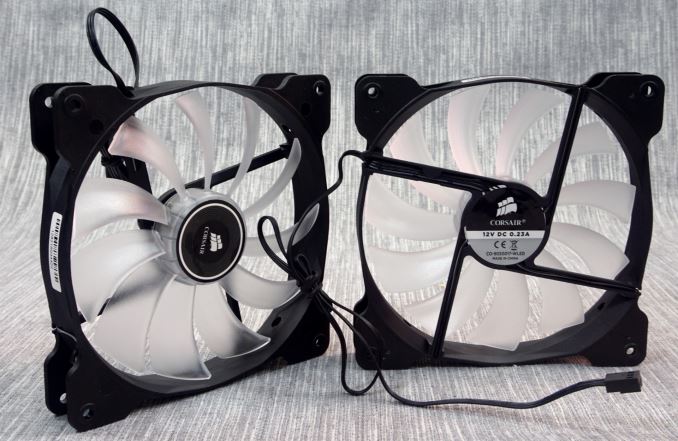 There are four LED lights installed on the frame, in parallel with the plastic engine support bars. We received the white version of the fans but they are also available in blue, red, green and purple. 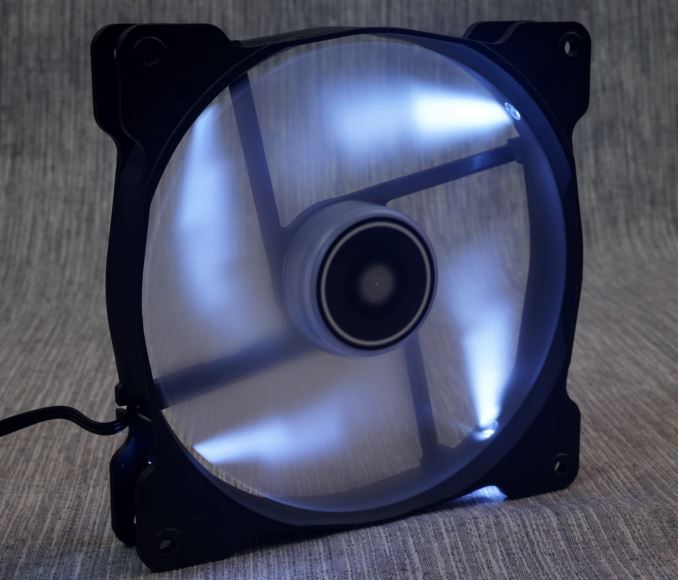 The AF140 and the SP140 side-by-side look almost identical, with the exception of the fan's blades. The high airflow AF140 has more (11) and narrow blades, capable of creating higher airflow when there is no restriction, while the SP140 has fewer (7) and wider blades, allowing it to create higher pressure and overcome airflow obstacles. 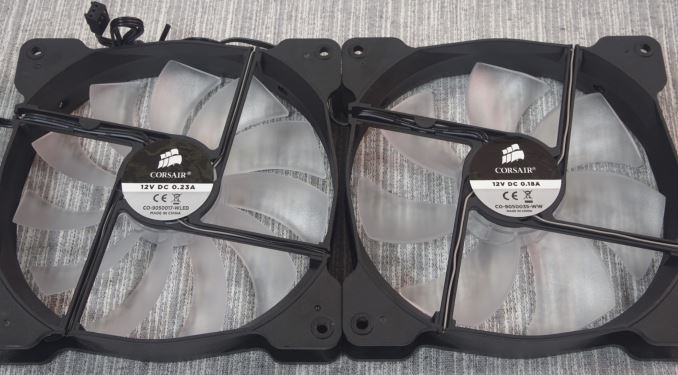 A mere look on the non-LED version of the fans is enough to reveal that they are higher performance designs than the LED versions. The plastic frame is about the same but it is of higher quality and there are hard rubber anti-vibration supports. A colored ring surrounds the intake side of the fan. By default, the SP series fans come with the blue ring and the AF series fans with the red ring installed out of the box, but all three colors (blue, red and white) are included in each package. 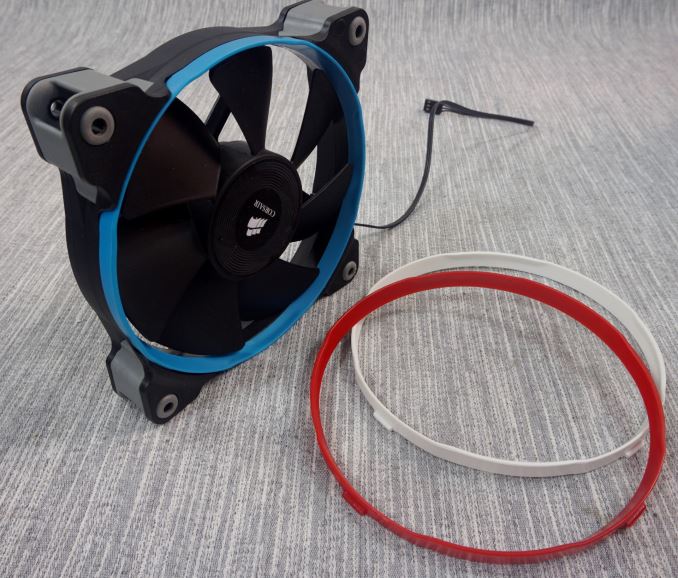 The Quiet and Performance versions of both the AF120 and the SP120 120 mm fans are physically identical to each other. Once again, the large differences are between the AF120 and the SP120 version fans, with the former having more and narrow blades and the latter fewer and very wide blades. However, the number, shape and angle of the blades is different than their LED counterparts, which explains their significantly different performance specifications. 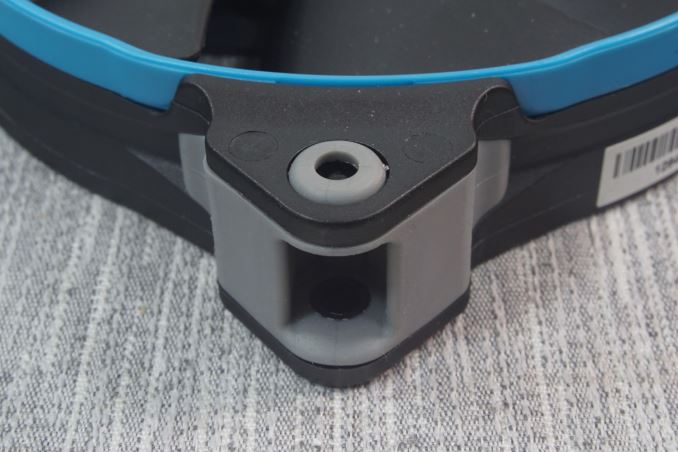 Corsair advertises the SP120 and AF120 fans, both the Performance and the Quiet editions, as having a "hydraulic bearing". A hydraulic bearing technically is a sleeve bearing with the bearing and axle immersed and sealed in fluid. Technically, the axle and the sleeving do not come in contact with each other, as the fluid interferes. Unfortunately, we could not capture this in a mere picture, as the destruction of the seal and the removal of the shaft disappeared the fluid within it. 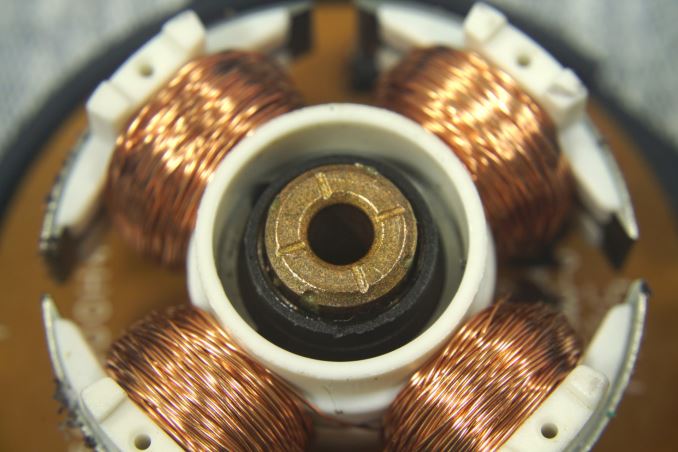 If one looks closely at the specifications of the AF140 LED and the SP140 LED fans, as well as all of the LED versions, they will notice that there is no mention of an "advanced hydraulic bearing". This is because the LED versions of the fans have an entirely different engine. When we broke the seal and removed the impeller, what we found was a self-pumping rifle bearing, which is yet another improvement of the standard sleeve bearing. What the rifle bearing does is that it uses the motion of the fan's axle itself to serve as a pump, constantly moving lubricant around the axle and the bearing. The lubricant is sealed in using a rubber seal at the top of the axle and a permanent seal at the bottom. 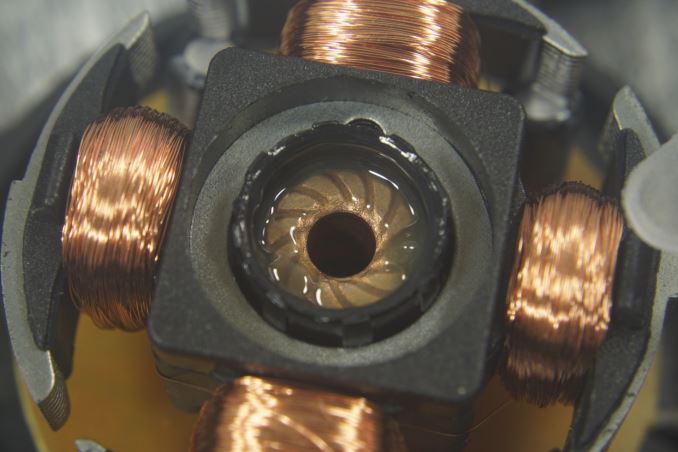 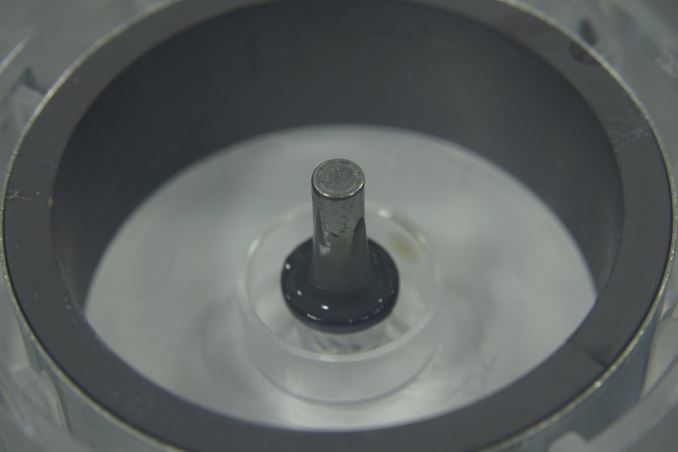