Today Logitech unveiled two new mechanical keyboards under their G branding, with the G610 Orion Brown and G610 Orion Red. As I’m sure many of you have already guessed, the different naming doesn’t refer to the color of the keyboards, but the Cherry MX switches inside. Logitech, being one of the world’s largest maker of computer peripherals, already makes mechanical keyboards with their own Romer G switches, as Ian saw at his Logitech Tech Day in Switzerland, but it must be hard to compete against the weight of the Cherry MX name, so the G610 Orion features either Red or Brown versions of the Cherry MX lineup.

Logitech calls the Cherry MX the “industry standard in mechanical switches” and that would be hard to argue at this point. The switches are rated for over 50 million keystrokes, and the wide array of switch models make them a favorite of a large range of people. Logitech has chosen the Brown, which have “a tactile bump for feedback” as well as the Red, which have “a linear keypress” and since everyone seems to have their own preference when it comes to the Cherry MX switches, it’s nice to see them offering two options. Key travel is 4 mm and actuation is 2 mm, and the switches are rated for a 45 gram actuation force. 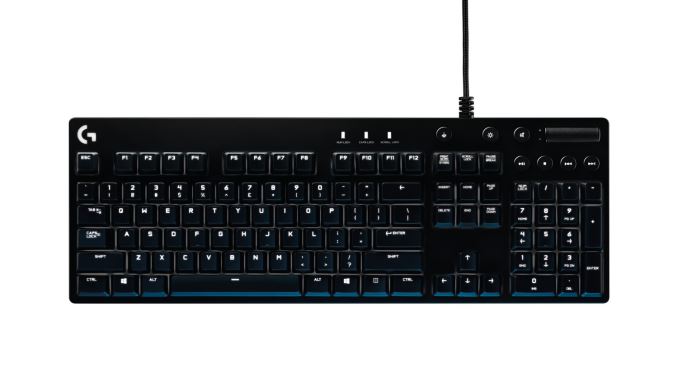 The keyboards also feature customizable backlighting, and while the light is a monochrome white, brightness levels can be adjusted on a per-key basis. The key lighting is controlled by the Logitech Gaming Software, and allows synchronization of the lighting with other Logitech G products.

Other features of the keyboards are a fingerprint-masking matte texture, which is something I’d love to see on more laptops, and Logitech has gone with a 6-foot braided USB cable which not only looks better than plastic, they generally are a bit easier to work with as well.

The keyboard features dedicated media keys, as well as full customization of the keyboard using the Logitech Gaming Software, including macro support for the F1-F12 keys. This and lighting can be controlled when you enable Game Mode. The keyboard itself is 153 mm x 443.5 mm x 34.3 mm and weighs 1.2 Kg.

The Logitech G Orion Brown and Red keyboards will be available this month in the US and Europe, with a MSRP of $119 or €139, which is a bit less than the Logitech G910 Orion Spark.