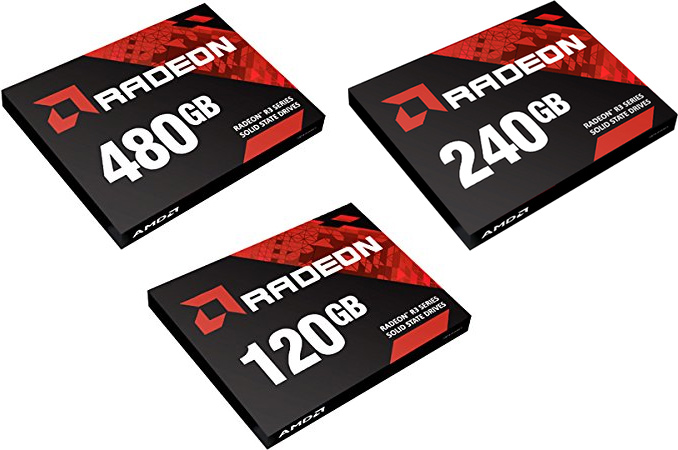 Over the past week or so, we noticed other news outlets reporting on the AMD R3 series of SSDs, as if there had been a recent press release circulating under the radar. This wasn't the case: despite the fact that the R3 SSDs have been out for a number of weeks, one news outlet decided to run a story and the rest followed the echo without investigating further. We put it direct to AMD about how the R3 SSD release was under the hood, and how the R7 drives had also been removed from listings. We had an interesting response, which we would like to summarize and discuss here.

AMD’s Radeon R7 SSDs were developed by OCZ and featured 64 Gb NAND flash chips from Toshiba made using the company’s second-generation 19 nm (A19) fabrication process. In many ways, the drives resembled OCZ’s ARC 100 and Vector 150 drives, but since Toshiba is phasing out its NAND flash made using 19 nm manufacturing technology, the Radeon R7 SSDs are also discontinued and right now online stores are selling the remaining inventory.

For the newer Radeon R3 family of SSDs, AMD chose a different partner. The drives are manufactured by a contract maker and then distributed by Galt, the company that distributes AMD’s Radeon-branded memory modules. Working closely with companies like SK Hynix, or OCZ, allows AMD to tailor certain aspects of SSD performance and offer a different (well, to a certain degree) differentiation point that is not available from anyone else. Moreover, since SK Hynix is a relatively small player on the SSD market, it is interested in increasing its share and may be flexible about pricing. AMD admits that the new R3 drives are indeed slower than the older R7 ones released earlier due to the movement from MLC to TLC, but it notes that they are considerably cheaper too, which was one of the primary reasons why the company decided to sell them. Furthermore, since Galt now handles logistics for AMD's DRAM and SSD products, it can do everything a little more efficiently in terms of costs.

The newer AMD Radeon R3 solid-state drives come in 2.5"/7 mm form-factor and are based on the quad-channel Silicon Motion SM2256KX controller as well as TLC NAND memory made by SK Hynix. The new SSDs are available in 120, 240, 480 and 960 GB configurations, which are rated for up to 520 MB/s maximum sequential read speed as well as up to 470 MB/s maximum sequential write speed. Like other TLC NAND-based drives, the Radeon R3 SSDs use a part of its flash memory in pseudo-SLC mode for caching and performance-acceleration purposes.

However, the release of the Radeon R3 SSDs does not mean that AMD simply leaves the market of more advanced SSDs and focuses on low-cost models.

New R7/R9 On The Horizon

AMD intends to introduce new higher-end Radeon SSDs towards the end of the year, the company said this week. Quite naturally, AMD remains tight-lipped about exact plans, but it confirmed that the new family will include faster SATA drivers as well as M.2/NVMe drives for future platforms. Keeping in mind that AMD does not seem to stick to one supplier of memory or drives, the new Radeon R7 SSDs (or will they be called Radeon R9?) may come from a new supplier. Nonetheless, if AMD intends to continue working with manufacturers with their own NAND (or, at least, a very tight relationship with actual makers of flash), then the list of its potential partners will be relatively short.

When AMD introduced Radeon-branded memory modules several years ago, the company said that those products were optimized for its platforms, which was important as AMD needed faster DDR3 DRAM to improve the higher supported memory and performance of its APUs in graphics applications. As an added bonus, Radeon-branded memory modules was a way to give something back to its loyal customers as well as modders. With the Radeon R7 SSDs, the company pursued the same strategy but never attempted to expand the family of its storage devices. By now, Radeon-branded non-graphics hardware seems to have become a noteworthy part of AMD’s business, which is why it is gradually expanding the lineup of such products (e.g., the company introduced its DDR4 memory modules months ago, well ahead of any AMD APUs/CPUs with DDR4 support). Since TLC NAND is here to stay, it is pretty obvious that by the end of the year the company will offer SSDs for a variety of market segments: R3 for the entry-level and R7 (or R9?) for the higher-end.

Some Thoughts: AMD in SSDs (and DRAM) Feels a Bit Odd, Right?

The art of selling rebadged components, or using an ODM/OEM relationship and then adding a name on to it, might not seem like a true integration into these markets. While there are DRAM modules and SSDs with AMDs name on them, they are not actually investing much research money into driving the industry forward - these are turn-key solutions, similar to the way that local brands have smartphones that are identical apart from the sticker and the software. The reason for AMD reaching out with SSDs and DRAM (which likely offer little-to-no margin compared to the rest of the products) comes down to support, validation and system integrators.

By offering an AMD brand SSD or DRAM module, it means that if a customer wants guaranteed compatibility and a single source for their parts, they can ring up an AMD distributor. This simplifies support for any component that needs to be replaced and means that inside and out everything comes up AMD (or as much as possible). It allows system integrators to offer their customers validated AMD hardware packages as well.