As sort of an unusual trend we have been keeping track of, the 172T is now the fifth LCD monitor in a row we have reviewed that comes standard in a dull silver color.  Feel free to check out the ViewSonic VG800, Daewoo L700C and Albatron L17AT reviews to see how other silver monitors have fared!  In case you were hoping this was the last silver LCD we were going to post, you are out of luck as we have several more! 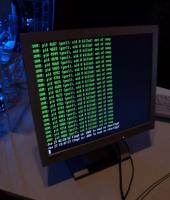 Onto more serious matters, the 172T holds very few things in common with the last Samsung LCD we looked at, the 191T (silver).  Immediately recognizable was the wider bezel on this model.  We did not discover until afterward, but the 191T bezel is a uniform width around every side so that it can be locked together with other 191T’s to produce a “wall” of 191T’s.  This does not appear to be the case with the 172T as the bezel width on the sides and top appear to be a little narrower than the bezel on the bottom.  The buttons, however, appear to be of the same fashion; very narrow, but still wide enough to press easily.  The other day we noticed that the buttons were strikingly similar to that on some of the Samsung mobile phones on the market right now.  It is probably very likely that Samsung had some of the same designers in their mobile phone department work on their digital display products.

The core components of the 172T were on par with what we had expected.  The monitor is capable of both DVI and analog, which is a welcomed change over the last few monitors we looked at.  We will test the performance of the monitor later on in this article.  Brightness, contrast ratio, and refresh rate were all on par for a typical LCD.  Oddly enough, even though it only boasts a 500:1 contrast ratio, we still found the picture brighter and more vivid than the ViewSonic VG800, which supposedly claimed a 600:1 contrast ratio.  The real only complaint we had about the monitor was the refresh rate.  For those of you who have not read our other articles, let us briefly go over what refresh rate is again.

Typical CDT/CRT monitors consist of a cathode with an electron gun inside.  When this gun emits electrons, it excites a mesh that displays the colors you see on the screen.  The amount of oscillation this gun can obtain is referred to as the refresh rate.  Most large CRT monitors with a refresh rate less than 70Hz can become painfully noticeable in the form of a wobble in the picture.  LCD’s, however, do not have electron guns, but instead pixels.  Believe it or not, it takes a small fraction of a second for a pixel to turn on or turn off.  Thus, to go from black (all off) to white (all on) and then back again is referred to as the response time.  The confusing matter tends to come in where each manufacturer calculates this time a little different.  The newest Hitachi monitor line uses a newer phosphorus technology that allows the pixel to go from the off to on state (also referred to as ‘rising’) in 12ms and then back to off in 4ms.  These numbers are then added together to give the response time.

Unfortunately, at 25ms (rising and falling) 172T in raw response time was disappointing.  We will have a full review of the CML174 within the next few days to see if the real world performance proves these claims.  So far, our only bone to pick with Samsung happens to be the response time.  Since it will probably be at least six months before the next revision of the 17X series monitor, we are unsure as to how Samsung plans on competing with the new ultra-low response time monitors

While researching this article, we came across a claim that the 172T whined when switching from analog to DVI.  We realize that our model is a handpicked review unit, but we were unable to replicate this whine.  Taking a page from our 191T review, we took a road trip to the nearest computer retailer to see if an “off the shelf” model would have similar result.  We expressed our situation to a manager and were able to get a boxed monitor running to check out.  This model did not produce a whine either.  However, there may be a batch of units that produce this high pitched whine, and the problem might be isolated to just a few retailers.

Our final issue with the construction of the monitor lays in the DC adaptor.  Although not an actual problem, we were disappointed to see an external DC adaptor for this monitor.  We praised the Daewoo L700C LCD a few months ago because it integrated the DC adaptor inside the monitor, thus reducing the amount of wires to the system.  Because Samsung went the extra mile in consolidating some of the cabling on the bezel, it would have been nice to see them go all the way and also eliminate the DC adaptor.