We took a look at the Samsung 172T last week and we were very pleased with the final product.  Unfortunately, even for all its grandeur, we were not impressed about the 25ms response time.  Even though we did some rudimentary gaming tests to look for shadows or 'trails' in the image, we already knew most gamers would automatically reject purchasing the 172T without that magic sub-20ms performance specification.  Since Samsung will not have an ultra-low response time LCD for at least 5 more months, everyone wants to know who the current gaming LCD champion is going to be. 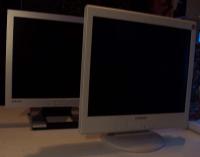 Needless to say, the outlook on Hitachi display technology has looked bleak.  They stopped production on all CRT's a year ago and dedicated themselves to only LCD production.  But how did they plan on stealing the attention away from the number one and number two producers of LCD substrates?  By going to the number three producer of LCD screens, of course, AU Optronics.  AUO, if you are not familiar, is a merger of Acer Display and Unipac Optoelectronics.  Currently, AU Optronics produces the only 16ms response time LCDs on the market.  Therefore, every 16ms LCD on the market right now will be some sort of variation on the same AUO screen.  The Hitachi CML174 leads the pack in 16ms response time LCDs as far as popularity, but it should be mentioned that the Eizo and ViewSonic 16ms monitors are also manufactured with the same AUO panels.  To briefly address the questions to those in our forums; there is no 16ms version of an 18'' or 19'' version of this panel yet, so we are limited to the smaller 17'' versions until large scale production begins on the bigger screens.  (Samsung stated to us that they will be implementing their low response time technology on the larger monitors and working their way down instead).

Hitachi has longed for a product to steal the spotlight and right now it looks like they have just that.  Gamers and enthusiasts alike have praised the CML174SXW for several weeks now.  Rather than rush a review of this product, we decided to take our time and take a very thorough look at the most popular LCD available right now.  Get ready as we examine every inch of the CML174. 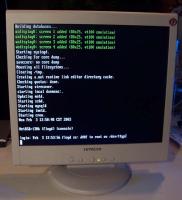