As-is, one of the most important factors for upgrading a smartphone remains battery life, due to a combination of inherent demand for a phone that can last 2-3 days of use and applications that demand enormous amounts of performance over long periods of time. Apps like WeChat are fairly notorious for holding wakelocks on Android and never really stopping background resource usage so there’s also an element of OS optimization that goes with keeping real-world in battery life up to expectations.

In order to test these things, we’ve spent the past year developing and validating a new web browsing battery life test which updates the sites used and introduces a scrolling component which attempts to better model how a number of tasks are not simply race to sleep and contain a steady-state component. We’ve also updated our rundown tests to better reflect reality and maintain appropriate loads as some devices with high-end SoCs and low display resolution were outpacing our testing. As always, all displays are set to 200 nits with location and other background services disabled to reach a useful relative comparison. 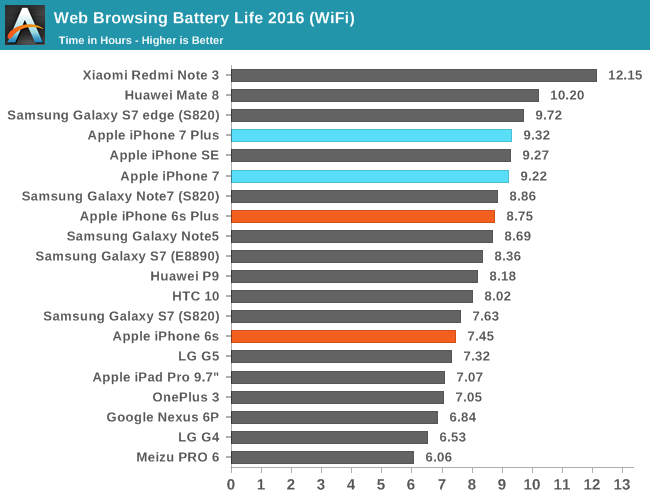 Looking at our WiFi web browsing test, it’s genuinely ridiculous how well the iPhone 7 and 7 Plus perform in this test. The iPhone 7 Plus is definitely down on battery life compared to the Galaxy S7 Edge, but it’s within 5% despite using a battery that’s almost 20% smaller. The iPhone 7 is actually comparable in battery life to the iPhone 7 Plus, and is significantly above the Galaxy S7 with Exynos 8890. Of course, the iPhone 7 has a significantly lower resolution display and a smaller battery, but the nature of smartphone design is that larger devices will generally have better battery life because the board area needed remains mostly constant while the amount of area for battery increases. The iPhone 7 has significantly improved in battery life here, likely due to a combination of A10 Fusion's power optimizations – particularly the small CPU cores – and the removal of the headphone jack, which teardown photos show to have been partially replaced with the battery. However if you do the math efficiency sees a relatively minor uplift.

One other interesting point is that Brandon accidentally ran the battery test on his iPhone 7 with a Safari Content Blocker enabled, which blocked all the ads on the sites that the test visits. In doing so, battery life rose from the normal result of 9.22 hours to 10.03 hours, demonstrating how the increased workload and long-running network requests from ads and trackers really impacts a smartphone's battery life. It's also worth noting that our test constantly cycles through pages, so if you spend a lot of time on a single page with ads you could see an even greater difference. 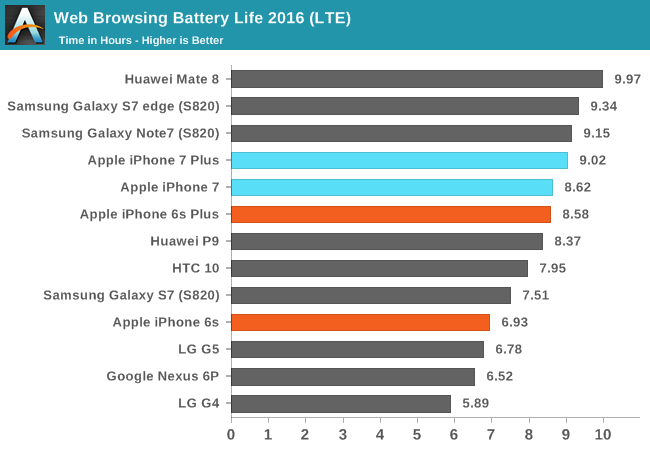 Moving on to LTE battery life the iPhone 7 and 7 Plus both slip a bit, but remain impressive. I suspect that the 20nm Qualcomm modem here is not well-equipped to handle the endless stream of ads that is increasingly a part of most websites. As ads tend to stream in incredibly slowly, the standby power of the modem is a significant factor. Snapdragon 820 devices don’t see nearly the impact here that the iPhone 7 and 7 Plus as their modem is on 14LPP rather than 20SoC. The iPhone 7 remains above the S820 Galaxy S7, but the iPhone 7 Plus is fairly comparable to the iPhone 6s Plus in battery life on LTE. 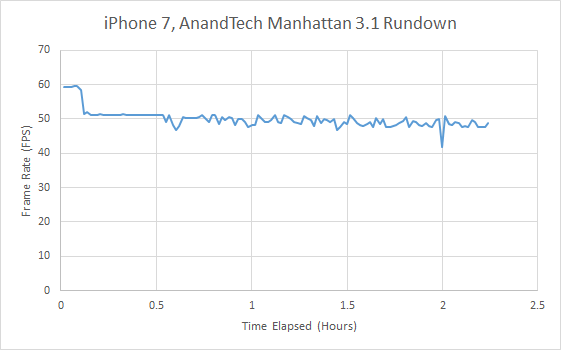 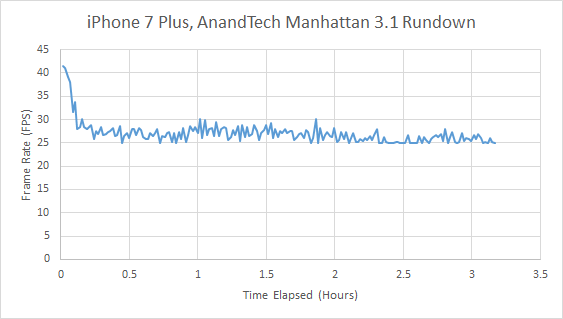 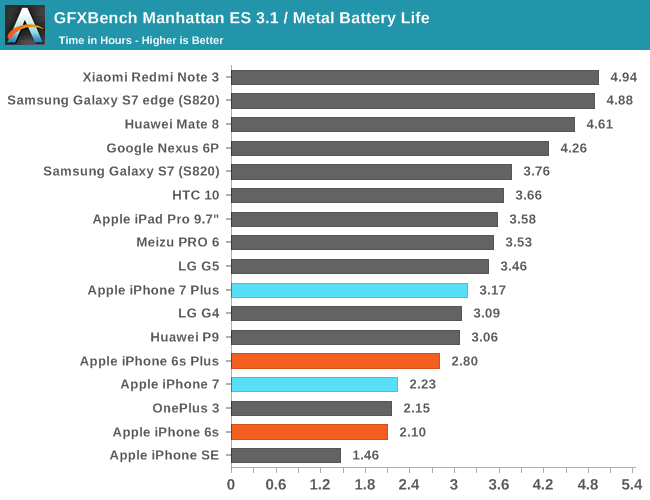 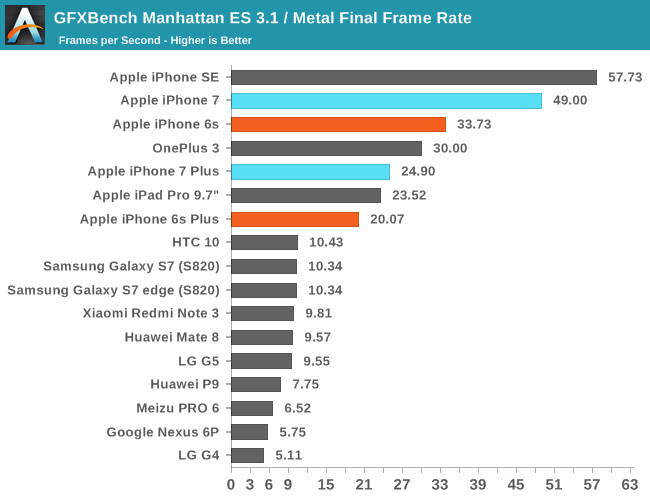 Moving past the web browsing test we use we can take a look at how the iPhone 7 Plus throttles. Unfortunately Basemark OS II was basically broken in this regard for the CPU rundown test so we can only look at how it behaves on Manhattan 3.1, but it's interesting to see how the GPU performance drops about 40% for the iPhone 7 Plus while the iPhone 7 throttles around 20%, because even Manhattan 3.1 is pegged to vsync which means that the GPU can spend much more time idling once a given frame is rendered. It's probably not a surprise here but the iPhone 7 just doesn't last very long here because battery life is strongly SoC-bound. If you attempted to plot battery life as a function of overall SoC utilization, it's entirely possible that the iPhone 7 might last longer than the 7 Plus at the lower bound for utilization, but as soon as you go past web browsing and similarly "light" tasks the 7 Plus and most phablets are going to strongly outperform such a small phone. Here the larger battery helps to get the iPhone 7 Plus nearly another hour of battery life when the SoC is under full, continuous load.

As usual, while battery life is the salient characteristic that determines overall mobility, it’s important to not ignore charge time as there are a number of edge cases where charging has a significant impact on overall mobility. In order to test this we use power measurements at the wall and measure the time it takes from the moment that the charger is plugged in to the moment that it falls below a pre-determined draw from the wall. While this isn’t perfect due to varying levels of DC conversion efficiency and different methods of trickle charging, this method provides at least a reasonable approximation of how long it will take to charge a device. 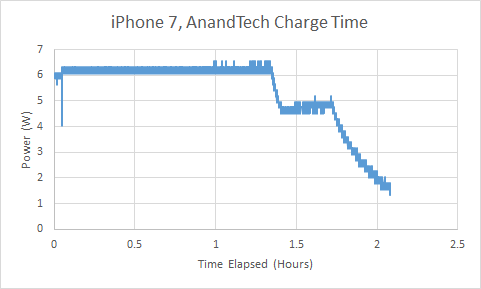 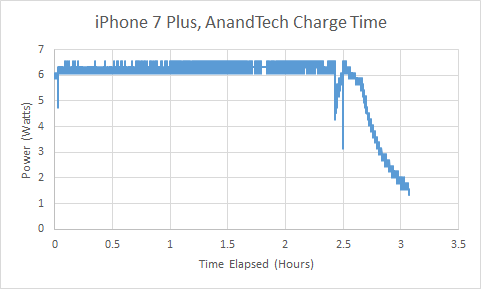 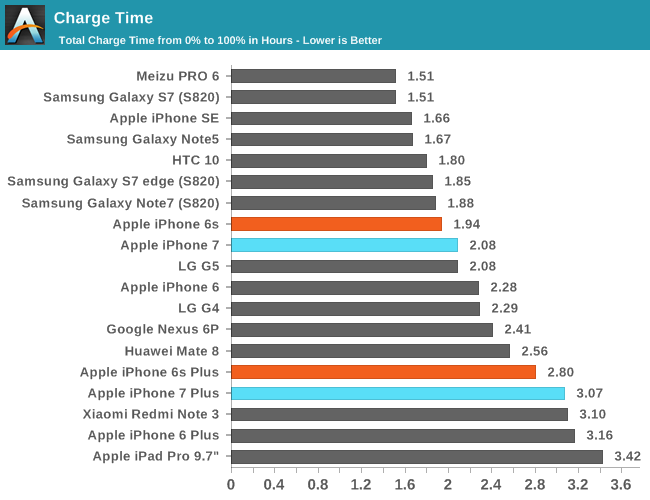 In the case of the iPhone 7 and 7 Plus, Apple continues to ship their standard 5W chargers for US variants. Looking at the results, it’s probably obvious that at least in the case of the iPhone 7 Plus, there is a very real need for Apple to start shipping something with faster charging, as the standard 5W charger takes a full hour longer than most of its competition to charge to 100%. Even the iPhone 7 could use a higher power charger here as using the device while it is charging will significantly impact the charging rate as the charger cannot supply enough power to the board while also charging the battery. And in the case of both phones, the lack of a high power charger doesn't just draw out the total charge time, but it also precludes rapid charging (partially charging a depleted phone very quickly) as well.

It would really be prudent for Apple to start to transitioning to higher power AC adapters at this point. This doesn’t take away from how impressive battery life is, but overall mobility isn’t going to be better than the competition unless you go out of your way to buy an iPad charger.