Anyone tasked with handling the way data is moved around a processor deserves praise. It takes time, dedication and skill to design something that not only works appropriately and for all edge cases, but also can run at speed and seamlessly for software. The topic of interconnects has featured regularly over recent years, with cache coherent networks and unique custom designs entering both hardware released to the public as well as behind-the-scenes designs. This week sees the launch of the Gen-Z Consortium, featuring names such as ARM, Huawei, IBM, Mellanox, Micron, Samsung, SK Hynix and Xilinx, with the purpose of designing a new memory semantic fabric that focuses on the utilization of ‘on-package and storage class memory’ (HMC, phase-change, 3D XPoint etc) at the hardware level. 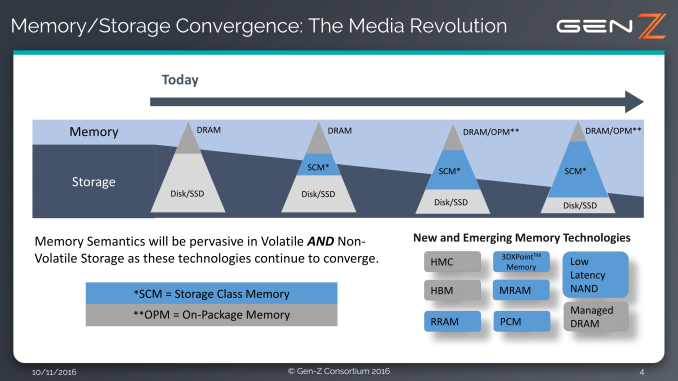 The purpose of the Consortium is the development of the interconnect, with a focus on being an open and non-proprietary standard that scales from node to rack, and free from royalties (it’s a non-profit). The interconnect will be a memory semantic fabric, handling memory operations and communications such as load/store, put/get and atomics that are typically managed by the processor and software. The issue arrives when memory is in storage class devices which are block based rather than cache line based, and thus there is an aim for a high bandwidth (>100GB/s) with low latency (sub-100ns) for load-to-use functionality. 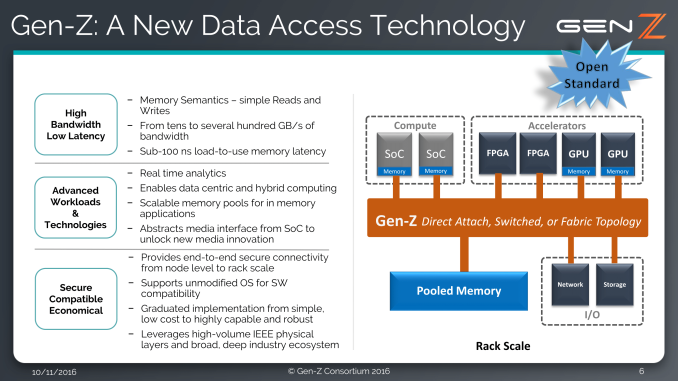 The interconnect is also aimed at offering real-time analytics, working between CPU cores, SoCs, FPGAs, GPUs, pooled memory and networked storage. There is also aims for security, as well as support via unmodified operating systems (which indicates that the new interconnect is a pure hardware design) and support within tiered memory hierarchy. Another goal is low-cost implementation, which will require working close with semiconductor manufacturers. 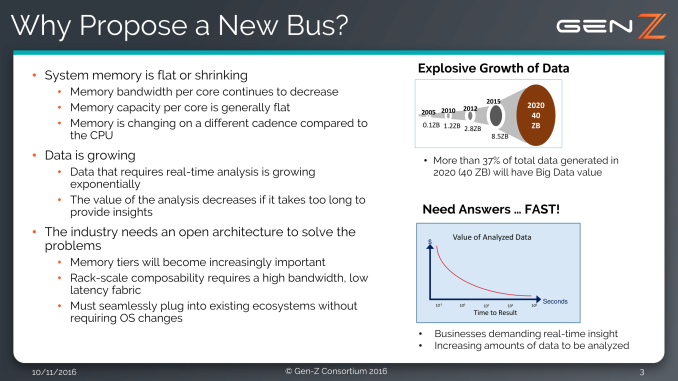 The Consortium consists of a number of key players designing SoCs and large scale systems: 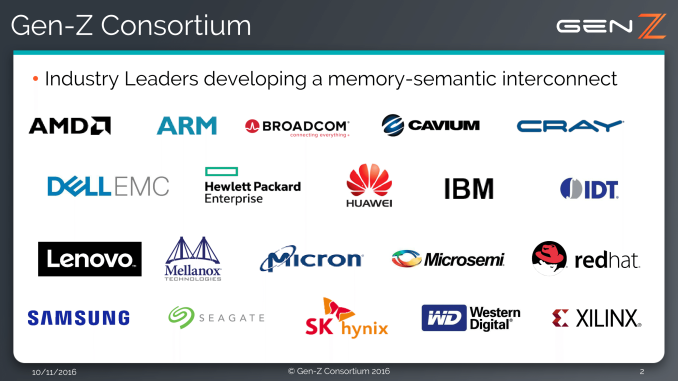 Among the IP vendors (ARM, IBM) are fabless semiconductor companies (Broadcom, Xilinx) and big enterprise players (Dell EMC, HPE, Cray for supercomputers). Any which way you cut it, it represents a lot of the industry, except one major player at least – Intel. Despite Micron in there with 3D XPoint, Intel’s own designed interconnects are under lock-and-key with patents and proprietary technology, and given how the enterprise market is moving more into accelerators and/or non-x86 architectures with a myriad of microarchitectural designs, solution providers have more options to choose from. That being said, with the goal of Gen-Z to be open and free, that doesn’t stop anyone else from actually using it and it would be argued that the ultimate goal is to promote adoption.

Despite this week being the formal announcement of the Gen-Z Consortium, it would seem that something has been brewing for a while given that the press release today has stated that the core specification covering the architecture and protocol will be finalized in late 2016. I suspect we might hear something at SuperComputing 2016 in mid-November.