We’ve covered AMD’s progress into open source software development, with most efforts coming through GPUOpen. AMD is keen to point out that over 2016 GPUOpen now provides 70+ SDKs/Samples/Libraries/Tools that are used in common software packages such as VLC, Firefox, Ubuntu, WordPress, Blender and so on. As part of today’s announcement, a few more tools are coming to the box.

Radeon Loom was demonstrated earlier this year, and the beta preview is now available through GPUOpen. Loom is AMD’s answer to the current problem of 3D camera content: how to stitch together a sufficient number of flat images to remain seemless in a 360º environment or playback. 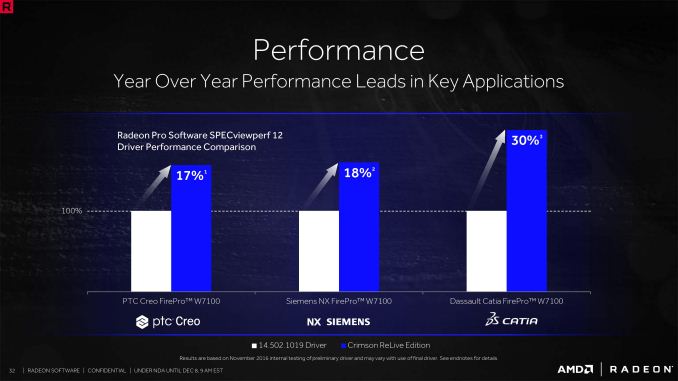 With the new preview, using AMD’s open source implementation of OpenVX, developers should be able to use the toolset to create a combined 4K 360º video using 24 images in real time. This becomes important when live video is streamed into a 360º experience, such as sitting on the touchline of a sports game or getting ring-side seats. For non-live content that is pre-processed to consumption, Radeon Loom will support 31 image input for an 8K equivalent display.

In the world of benchmarking, two main issues have probed up in recent years. Firstly was the issue regarding multi-GPU frame pacing and runt frames, which exposed not only hardware failure but the failure for software to accurately record what is shown compared to what is computed. To detect runt frames, the FCAT tool was developed involving on-screen overlay, capture, and frame-by-frame processing. This requires a second PC with fast storage, capture cards, and compute resources.

If runt frames aren’t an issue, such as in single GPU environments or with configured multi-GPU profiles, then the most commonly used software for live benchmarking is FRAPS. But due to the way FRAPS takes data, it cannot be used for DX12 or Vulkan due to the different way in which the frame pipeline is managed. AMD’s is promiting a new OCAT tool that is designed to be an all-encompassing frame rate benchmarking tool for modern APIs that is purely software based. 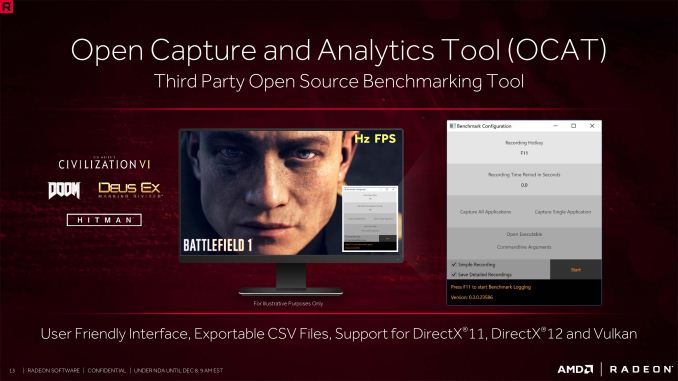 OCAT will support DX11, DX12 and Vulkan with a simple interface and log outputs. Rather than FRAPS that captures any screen that requires a 3D engine, OCAT will operate on software run through itself in order to put in the appropriate hooks required.

OCAT is third-party but also more importantly is open source. Thus despite AMD promoting it, analysis of the code can be performed to make sure there are no hidden tricks to frame calculations. We will be experimenting with the tool for our benchmarking over the course of the next few months.

One of the key talking points for 2016 has been the move towards DirectX 12, and here at AnandTech we’ve closely followed the sorts of improvements possible from creating content using the latest API as well as extensive testing as the technology was being enabled. As one of the lead partners in the DirectX 12 specifications, we would expect AMD to be promoting its use, and with today’s announcement AMD has stated that they are working with 50+ titles expected to come to market that will use DX12 features, up from the ~15 currently available.

As game engines are becoming the go-to tool for certain types of non-game content generation such as storytelling (or even story telling in games), then increased fidelity and realism, along with cinematic effects, are being integrated into these tools. For today’s announcement, AMD has added new tools to GPUOpen for Depth of Field (DoF) and updates to TressFX and H.265. 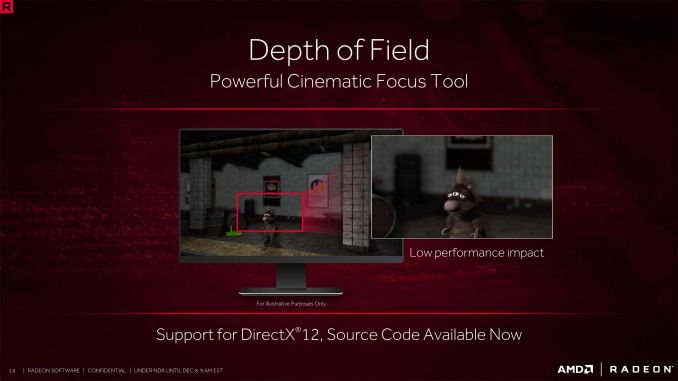 The DoF update is simple – it applies a relevant set of filters to the parts of the scene that are not meant to be in focus, basically a bokeh for game engines. AMD states this has a low-performance impact. 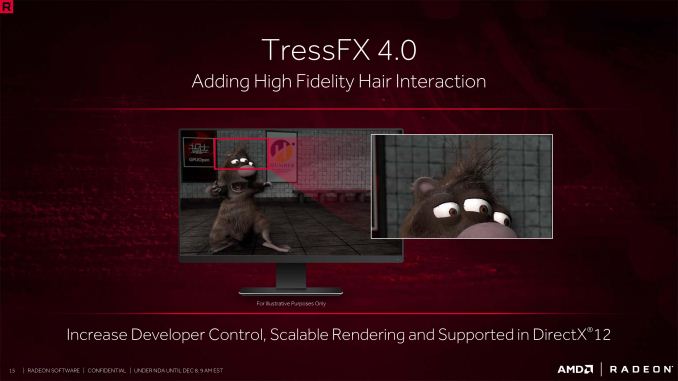 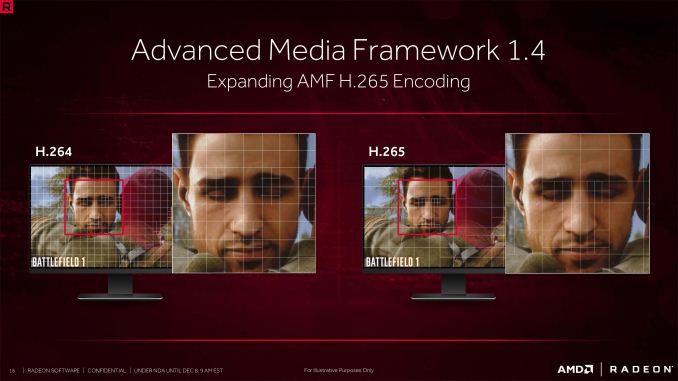 H.265 encoding has been a part of GPUOpen, but with the new launch the tools are being expanded for in-game DX12 frame processing. AMD was light on the details, except to say that more of the H.265 feature set is now available.