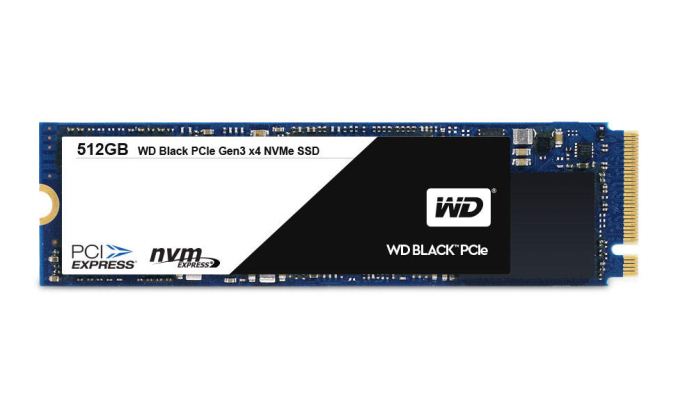 After acquiring SanDisk and introducing WD Green and WD Blue SSDs, it is no surprise to see Western Digital introduce a WD Black SSD that is a M.2 PCIe drive. In keeping with SanDisk's recent trends for mainstream consumer SSDs, the WD Black uses a Marvell controller (the 88SS1093, also seen in the Plextor M8Pe) and uses SanDisk's 15nm TLC NAND flash. And yes, the blue PCB is another SanDisk hallmark, even though it clashes with Western Digital's branding for the drive.

Western Digital and SanDisk are relatively late in bringing a consumer NVMe SSD to market. They're clearly intending for the WD Black SSD to be a fairly mainstream product by using TLC NAND and pricing it below high-end SATA SSDs. In the SATA space SanDisk has made very effective use of their planar TLC and the SanDisk X400 and WD Blue are the best in their class. Having taken their time developing the WD Black, we expect another solid performer. However, time is running out for planar TLC the WD Black may turn out to be a short-lived product before being replaced by a successor with 3D NAND. All four major NAND manufacturers plan to ship 64+ layer 3D NAND this year with TLC parts up to 512Gb, and if things go according to plan for at least two or three of them we should see the NAND shortage start to fade and prices and capacities improve.

The WD Black comes in only the two capacities that should be most popular: 256GB and 512GB. A 128GB PCIe SSD risks squandering much of the advantage of the faster interface due to the low number of NAND dies being a bottleneck, and 1TB PCIe SSDs are still expensive enough to be substantially less popular. A 1TB version would also need to be a double-sided M.2 module, which would limit compatibility with some laptops. As expected for a TLC SSD, the rated read performance is much higher than the write performance, though Western Digital does still give the WD Black a very nice looking random write rating. The endurance ratings for the WD Black are a little lower than I'd like to see given that even a TLC-based PCIe SSD is something of a premium product, but the five year warranty is quite reasonable.

Western Digital is currently taking pre-orders for the WD Black at MSRP and projecting a ship date of March 14, while there are already some third-party Amazon sellers offering it above MSRP. The MSRPs are about 10% higher than the current prices for the Intel SSD 600p, the current cheapest and slowest PCIe SSD.

For this review we will be comparing the 512GB WD Black primarily against other PCIe SSDs of similar capacity, and against a handful of the better SATA SSDs currently on the market. Some specific competitors to keep an eye on: