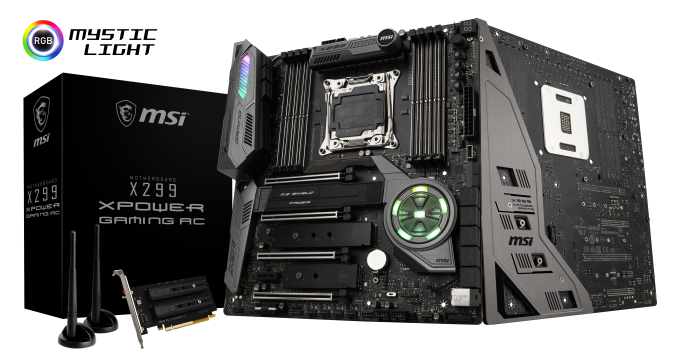 This week MSI has announced a new X299 motherboard: the MSI X299 XPOWER GAMING AC. This is designed as a flagship motherboard for MSI's X299 range, and aims to combine gaming features and performance with the overclocking pedigree of their XPower family from previous generations.

One thing that may jump out is MSI is adjusting its aesthetic scheme and returning back to a more neutral black on the XPower, a deviation from the recent generations where the XPower would get a 'titanium' silver treatment (or even older generations of XPower that were yellow). The theme agnostic color choice is due to the prevalence of RGB LEDs, found on both the “reactor” design of the chipset heatsink as well as above the I/O area on the shroud. The basic premise is that having customizable RGB LEDs should allow the motherboard to fit into more customized and themed builds, whereas some of the previous color designs may have pigeon-holed the design of systems. To contrast the dark color scheme, MSI has used their branded 'Steel Armor' protective coverings for the x16 PCIe slots, as well as the DIMM slots and the U.2 connector. 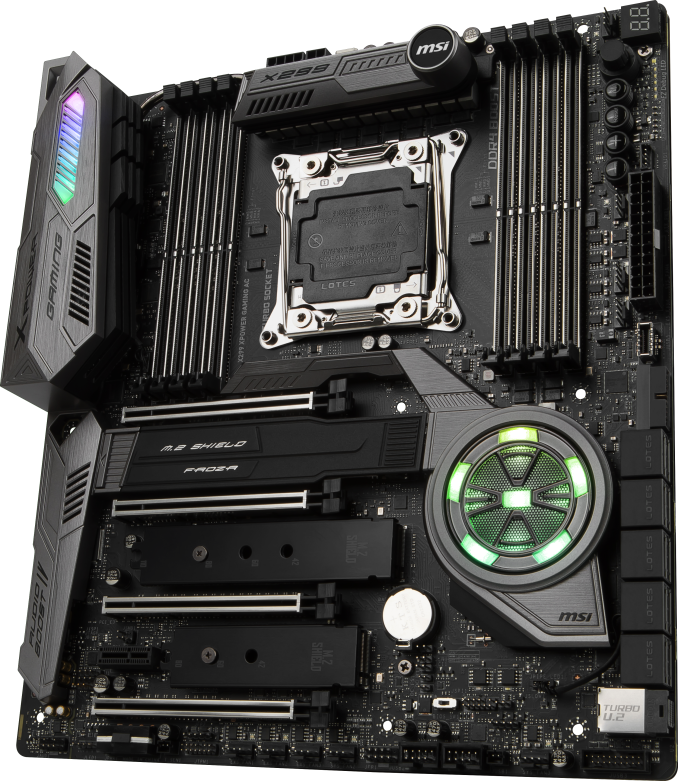 For the X299 XPower Gaming AC, MSI uses a 14 phase power design which is claimed to help heavy overclocking, combined with a joined VRM and IO heatsink. MSI likes to promote the use of 'Military Class' components for the power delivery and other features, and claims that their use of isolated memory circuits that use optimized routing (to ensure optimal signals to and from the CPU and RAM) will allow each motherboard to reach DDR4-5000 or higher depending on the CPU memory controller, although they do not state on what cooling (likely, sub-zero).

One of the key features for this board will be the M.2 support. MSI is directly supporting three drives on board, but has also bundled a riser card for two more. For the onboard slots, MSI is using its new heatsink, the M.2 Shield Frozr. For the top M.2 slot, the heatsink is connected to the PCH heatsink in order to help move heat away. The bundled PCIe riser card is called MSI's XPander-Z, for M.2 slot expansion. This add-in-card gives a PCIe 3.0 x8 connection, and allows the user to mount two additional 110mm PCIe 3.0 x4 M.2 drives on it, giving the board a total of five M.2 slots. The expansion card setup supports Intel VROC technology, allowing a RAID-0 configuration directly from the CPU bypassing the typical throughput limits of PCIe 3.0 x4 slots. 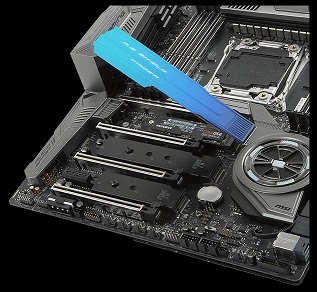 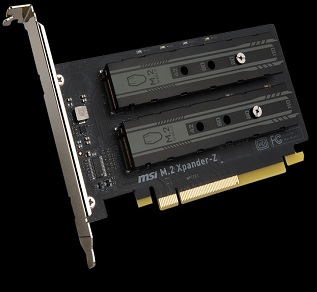 MSI used the ASMedia ASM3142 controller to deliver two USB 3.1 Gen2 ports, including a front panel header. They claim to have worked closely with several case manufacturers for product testing to ensure they are compatible with any MSI X299 motherboard. We've not particularly approached the ASM3142 controller in detail on AnandTech yet, but it represents a more power efficient variant of the ASM2142, which in turn is a dual-bandwidth version of the ASM1142, the first dual-port USB 3.1 (10 Gbps) controller we found on motherboards.

At the time of this writing, pricing and availability were not available.