In the interest of achieving and obtaining consistent results, the Team Group Night Hawk RGB DDR4-3000 kit has been left at the rated latencies, which was achieved by enabling the XMP profile, and changing the memory strap/multiplier to achieve the desired frequency each time through the GIGABYTE UEFI BIOS. On Ryzen in this BIOS, due to memory strap limitations and the inability to support 100 MHz straps, the only way to run the memory at DDR4-3000 would be to run the 2933 memory strap and then adjust the base clock up from 100 MHz to 102.3 MHz. This would technically overclock the processor and in doing so, would skew the results from the other straps tested such as 2400MT/s etc. 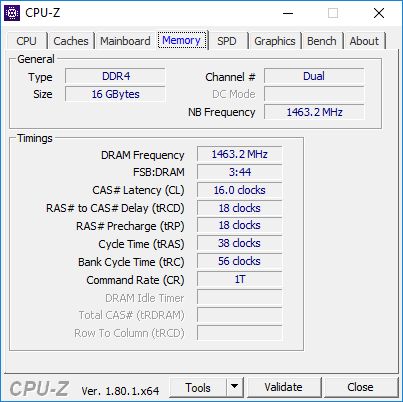 So to keep everything on an even keel throughout, all of the settings in the BIOS except the memory settings remained at default. The memory had its XMP profile enabled, the base clock put back to 100 MHz, and different memory straps were tested with identical latency timings. All other tests were run at 16-18-18, as per the memory kit.

For the testing we are using a Ryzen 7 processor, specifically the Ryzen 7 1700. AMD's official listed support for this processor depends on the amount of memory and the memory type. The short answer to this support is that when using one memory module per channel, the Ryzen 7 1700 is designed to support DDR4-2666, but when two memory modules per channel are used, the support drops to DDR4-2400.  For this test, because downclocking is easy enough, we start test from the DDR4-2400 data rate and go through the rated memory speed of the processor to the speed the memory is rated to.

We also overclock the memory beyond its rated speed. Each kit will offer different levels of overclocking performance, as it depends on the quality of the kit, the processor memory controller, and the motherboard, but we were able to push this memory kit all the way to DDR4-3333. At this speed it was stable in all our testing, and equates to a 10% increase on the rated frequency of the kit. It was interesting to see how much of an effect this speed would really manifest in our testing. 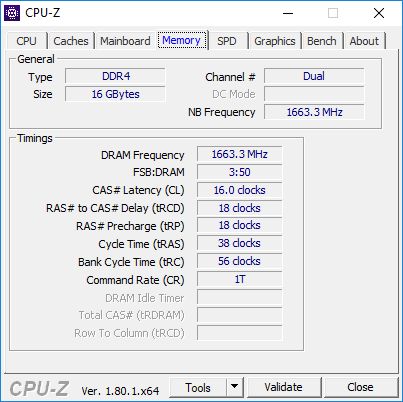 For users that are unfamiliar with this sort of image, this is the common CPU-Z tool that most professionals use to quickly probe the underlying hardware and speeds in the system. This is the main memory tab of the software, showing that we are using DDR4 in dual channel mode and have a total of 16 gigabytes. The NB Frequency, where NB historically stands for 'North Bridge', is the frequency that the Infinity Fabric is running at. In this case above, we get it running at 1663 MHz.

For a given frequency of the memory, say 1000 MHz, the system will perform 1000 million full clock cycles every second. These are full cycles, alternating from a peak voltage to a low voltage and back again within a single cycle. Modern memory, such as DDR4, is memory that runs at a Double Data Rate - this is what DDR stands for. What this means is that an action or a transfer can occur twice per cycle, usually each time the voltage alternates from peak to trough. This is also referred to as transferring on the clock cycle edges. The final result is that every cycle we get two transfers, so DDR4 at 1666 MHz is another way of saying DDR4 at 3333 mega transfers per second, or MT/s. Memory is quoted in terms of transfers per second, hence DDR4-3000 or DDR4-3333.

There is often user confusion here, with memory kits being listed as DDR4 at 3000 MHz when they mean DDR4 at 3000 MT/s (Ed: I'm pretty sure everyone on the AnandTech staff is guilty of this at some point). For this review, and any memory reviews going forward, AnandTech is going to keep consistency in how we represent numbers. Typically we will quote the MT/s value, as this is what is listed on the kit, and specifically state when we are talking about the frequency (in Hz) or the data rate (MT/s), and use 'speed' as the generic term.