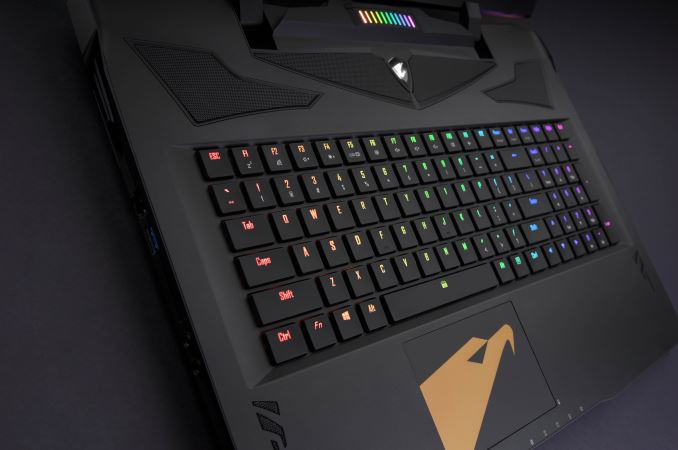 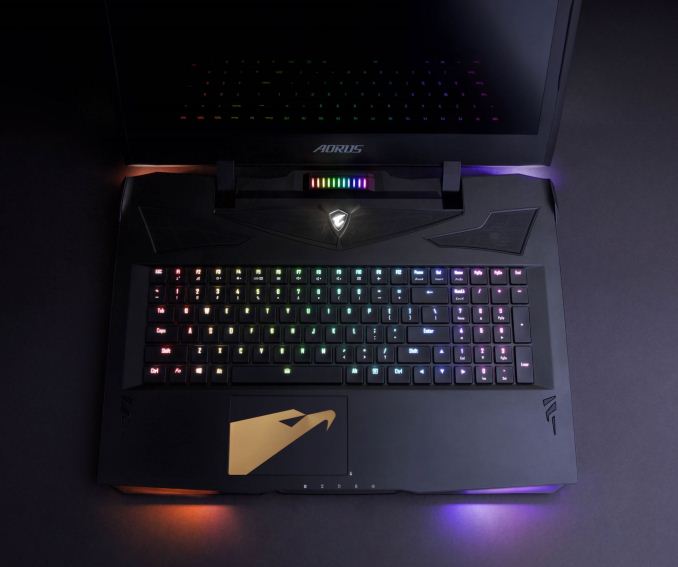 According to GIGABYTE, the laptop chassis has an exotic design based off of supercars and fighter jets for its design, and uses a ‘maximum’ amount of aluminum. At the nose is a LED AORUS Falcon while the other side is the AORUS HUD. The RGB HUD can show information such as CPU/GPU temperatures, battery level, volume level and others. It can also synchronize with the surrounding RGB chassis lighting. RGB LED accent lighting can be found on the front and back sides as well as in the AORUS RGB Fusion mechanical keyboard (quoted as 'brown' type keys, although the manufacturer isn't listed).

One feature many will notice is the depth of the laptop. It uses two GPUs but comes in at 1.18” thick at its peak. Inside the aluminum chassis is a quad fan cooling solution using a total of eight heatpipes to dissipate the heat output of the dual GPUs, the CPU, and the chipset. Cool air is sucked in through the Falcon shaped vents on the base and exhausted out the back away from the user, leading to a substantial rake on the keyboard, but this could be beneficial on the wrists for extended periods of use. 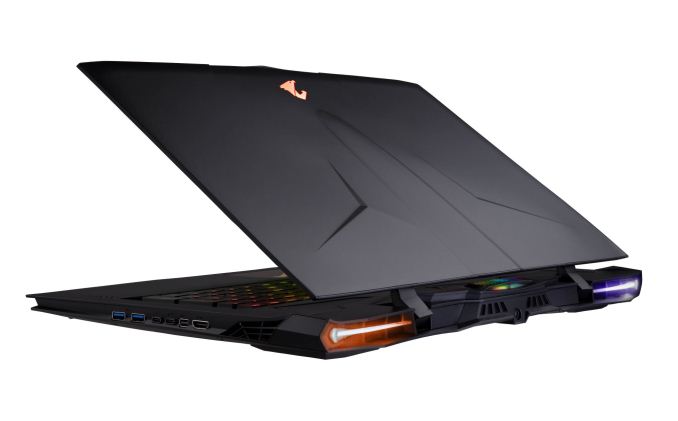 The i7-7820HK quad-core processor comes in at a base clock of 2.90 GHz with a maximum turbo frequency of 3.90 GHz, all in a 45W package. The X9 is able to overclock the CPU as well, with GIGABYTE saying up 15% increases possible. Memory capacity is up to 64GB due to its four DIMM slots and it is able to support speeds up to DDR4-2400, although exact capacity will vary depending on the retailer. Internal storage by two 1TB NVMe M.2 SSDs with bulk storage handled by a 2TB 7200RPM HDD.

There is a slew of modern connectivity on the device, starting from Thunderbolt 3 (1 x Type-C), USB 3.1 Type-C (10 Gbps), three USB 3.1 (5 Gbps) ports, a Mini-DisplayPort (v1.3), and a HDMI 2.0 output. It also includes a single 3.5mm Headphone out, a 3.5mm Microphone input, and a single SD Card Reader. Network functionality is handled by a Killer E2500 Ethernet port and a Killer AC 1535 dual-band Wi-Fi card, supporting Killer's Doubleshot Pro functionality which can route traffic to either the hardwired or wireless Killer adapters depending on priority.