For a render that has been around for what seems like ages, Blender is still a highly popular tool. We managed to wrap up a standard workload into the February 5 nightly build of Blender and measure the time it takes to render the first frame of the scene. Being one of the bigger open source tools out there, it means both AMD and Intel work actively to help improve the codebase, for better or for worse on their own/each other's microarchitecture. 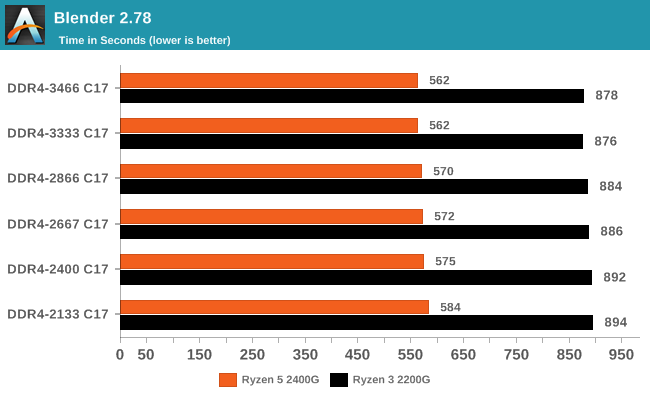 While memory speed does influence our final rendering duration consistently by shaving seconds off, the jump from DDR4-2133 to DDR4-3333 equates to a 2% reduction overall on the Ryzen 3 2200G, although the last step from 3333 to 3466 is actually a regression. The Ryzen 5 2400G experienced a reduction of just under 4%.

The Persistence of Vision Ray Tracer, or POV-Ray, is a freeware package for as the name suggests, ray tracing. It is a pure renderer, rather than modeling software, but the latest beta version contains a handy benchmark for stressing all processing threads on a platform. We have been using this test in motherboard reviews to test memory stability at various CPU speeds to good effect – if it passes the test, the IMC in the CPU is stable for a given CPU speed. As a CPU test, it runs for approximately 1-2 minutes on high-end platforms. 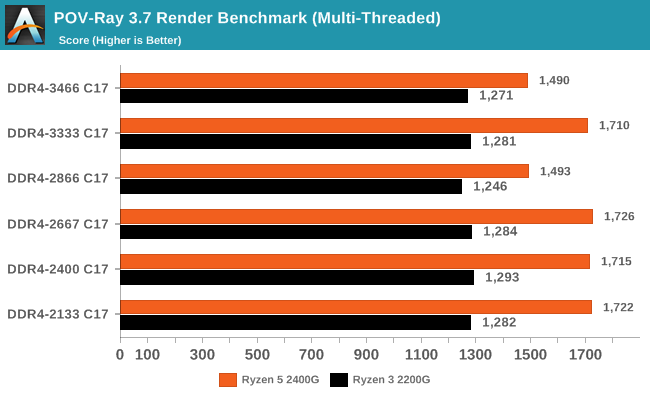 Our results in POV-Ray 3.7 were a little hit and miss and showed irregularities at different memory clock speeds, perhaps due to the additional power required by the memory controller at higher frequencies taking away from available CPU power. This means POV-Ray isn’t really influenced more by the memory speeds themselves, although it is certainly more determined from more CPU cores and higher frequencies as the difference between the 2200G and 2400G show. 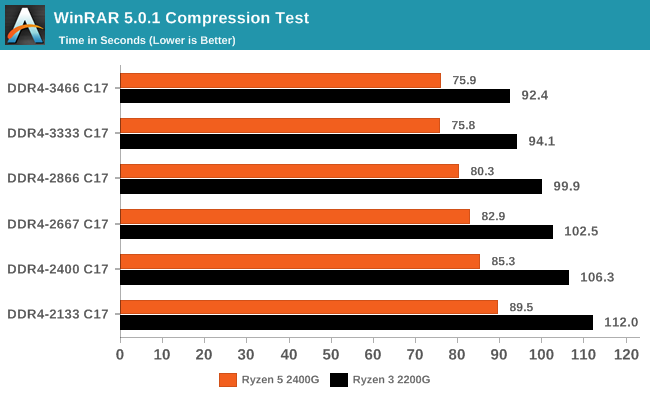 As the memory frequency was increased, the compression time was consistently lower going up a memory strap. With WinRAR being one of our most DRAM-affected CPU tests, we have seen this before with other CPU generations. The 2200G saw a 21% increase in throughput, while the 2400G had a +18% gain. However it is worth noting that the DDR4-3466 time was slightly slower than that of the DDR4-3333 time again.

As an open source compression tool, 7-Zip is a popular tool for making sets of files easier to handle and transfer. The software offers up its own benchmark, to which we report the result. 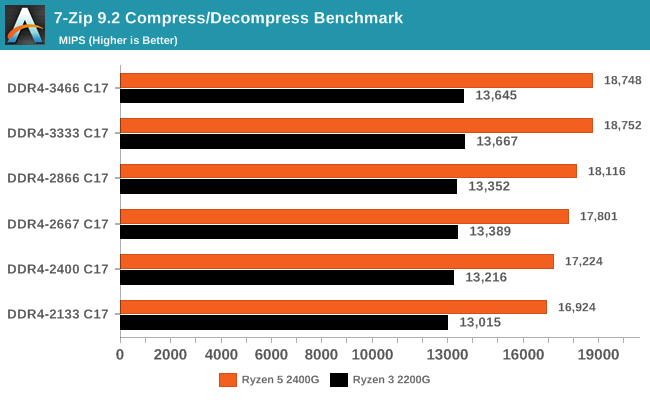 The 7-Zip results are interesting as with both Ryzen based APUs at the DDR4-3333 setting saw the biggest benefit in compression and decompressing. Again, the top strap in our testing was not the most performant. Overall gains were +11% for the 2400G, and +5% for the 2200G, in line with thread counts.

3DPM is a self-penned benchmark, taking basic 3D movement algorithms used in Brownian Motion simulations and testing them for speed. High floating point performance, MHz, and IPC win in the single thread version, whereas the multithread version has to handle the threads and loves more cores. For a brief explanation of the platform agnostic coding behind this benchmark, see my forum post here. 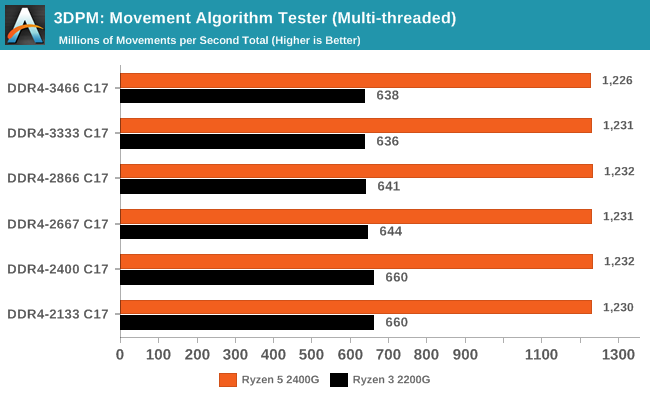 With our 3DPM Brownian Motion simulator benchmark, memory frequency made little difference in increasing performance, although as our results show, the slower the memory, the better performance we experienced on the Ryzen 3 2200G. The Ryzen 2400G experienced a similar range of inconsistent and inconsequential results showing little to no improvement as the memory strap was increased.

The newest benchmark in our suite is DigiCortex, a simulation of biologically plausible neural network circuits, and simulates activity of neurons and synapses. DigiCortex relies heavily on a mix of DRAM speed and computational throughput, indicating that systems which apply memory profiles properly should benefit and those that play fast and loose with overclocking settings might get some extra speed up. Results are taken during the steady state period in a 32k neuron simulation and represented as a function of the ability to simulate in real time (1.000x equals real-time). 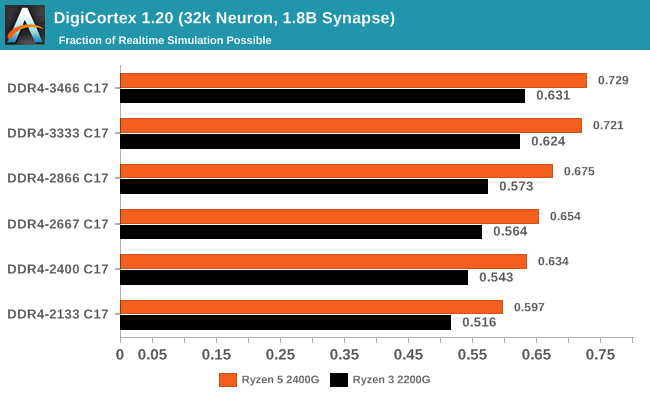 DigiCortex experienced a very subsequent increase throughout the tested memory straps on both the Ryzen APUs, with a nice jump in performance of 22% on the 2200G and on the 2400G.