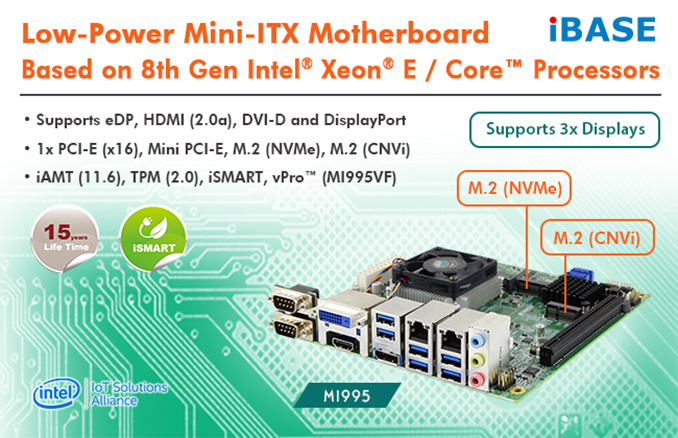 iBASE introduced one of the industry’s first Mini-ITX motherboards for Intel’s Xeon E processors on Tuesday. The MI995 is based on Intel’s mobile CM246 PCH and is aimed at low-power miniature specialized PCs. Meanwhile, small does not mean limitations, so the MI995 has nearly all the expansion capabilities its bigger brothers do.

The iBASE MI995VF-X27 is based on Intel’s CM246 chipset designed for laptops and supporting Intel’s Xeon E processors in FCBGA1440 packaging for mobile workstations. The particular model carries six-core Xeon E-2176M CPU. In addition, the manufacturer also offers the MI995VF-8850 and MI995VF-8400 platforms featuring the QM370 PCH as well as six-core Core i7-8850H and quad-core Core i5-8400H processors respectively. The Xeon-powered SKU supports up to 32 GB of ECC memory, whereas the Core-powered models can carry up to 32 GB of non-ECC DRAM. All the SKUs feature a TPM 2.0 module, and support vPro, iAMT 11.6 remote management, and iSMART 3.5 technologies.

Moving on to connectivity. The MI995 is equipped with two Intel GbE controllers, a Fintek F8196D-I chip for four COM ports, three display outputs, (DisplayPort, DVI-D, HDMI 2.0), six USB 3.1 ports, and audio connectors. As noted above, the motherboards may be outfitted with an optional 802.11ac Wi-Fi CNVi module.

iBASE officially positions its MI995 motherboards for digital signage, gaming, entertainment, and POS applications. Even out of the box, the platform can support multiple displays. Once equipped with a discrete graphics card, the system gains both GPU performance and additional display outputs, just what is needed for digital signage and gaming applications.

iBASE already lists MI995 motherboards on its website, but has not touched upon pricing and availability timeframe.