The LG G8 Review: Solid, But Not Great

For system performance, we saw the Snapdragon 855 in the Galaxy S10 perform excellently, and there shouldn’t be any reason for the G8 to perform differently. It’s to be noted that the G8 is only our second Snapdragon 855 device we’ve received so the only comparison point we have is the Snapdragon variant of the S10.

Unfortunately, it looks like LG using an older version of the 855 BSP which is lacking some optimisations or lacking some configuration options which improve performance. Among the lacking features is the lack of boost mechanism for the top-app process groups, meaning the scheduler will be less aggressive than what we find on the Galaxy S10.

Let’s see how these differences end up affecting the G8’s performance: 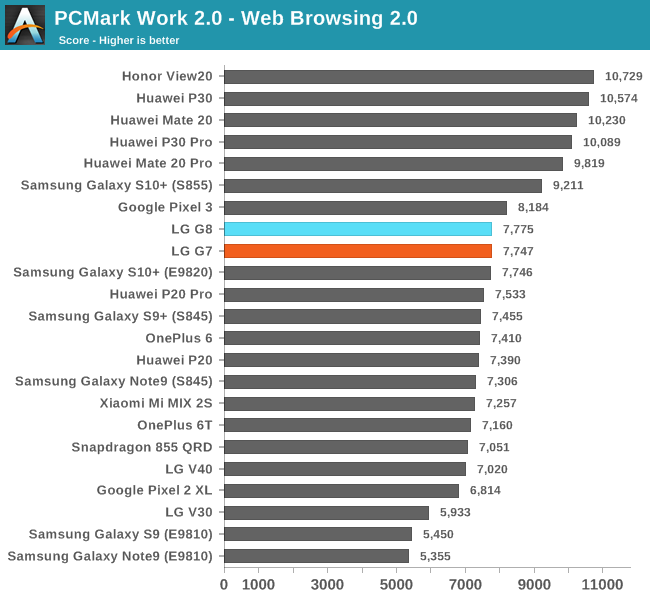 In PCMark’s web-browsing test, the difference ends up as quite major between the G8 and S10 as the former largely lags behind Samsung’s flagship, ending up with scores similar to the G7. The performance here reminds us of the initial benchmark scores from Qualcomm’s QRD855 reference platform in January, which also lacked some scheduler optimisations were commonplace in many of last year's Snapdragon 845 devices. 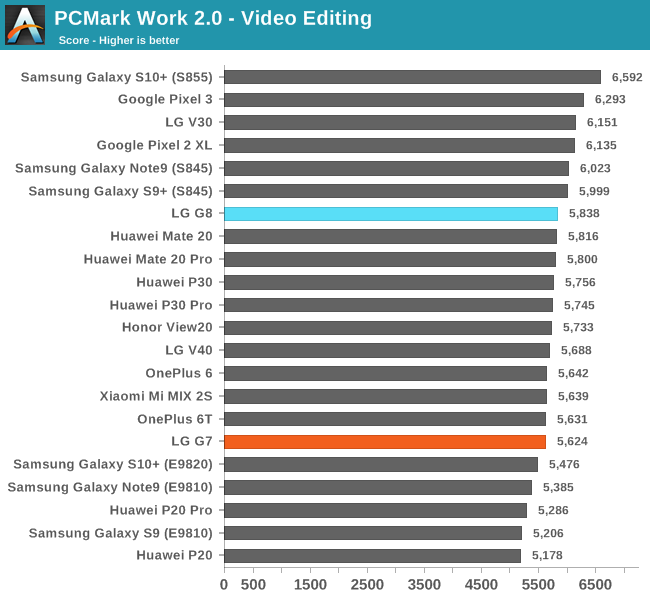 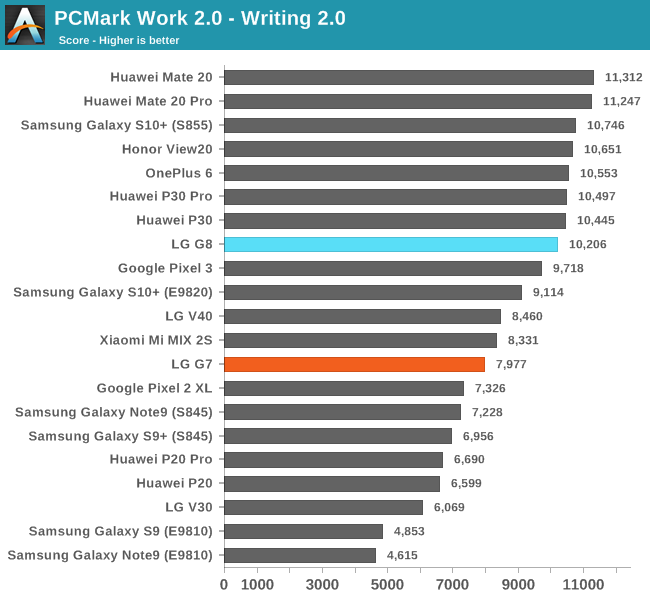 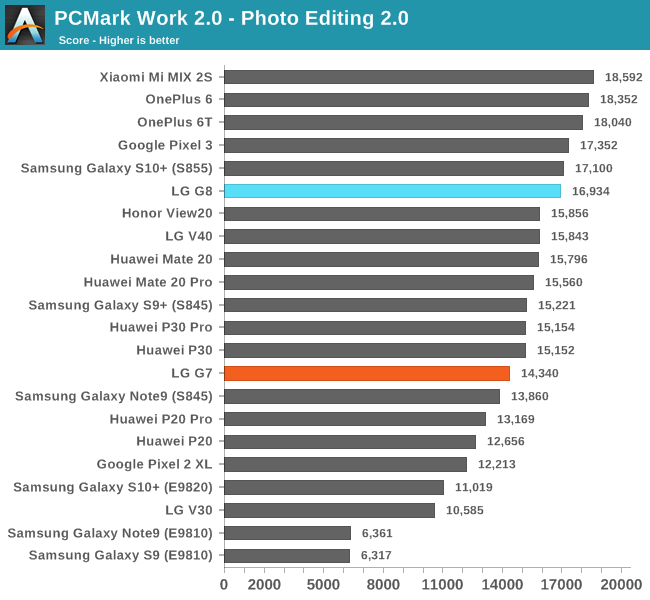 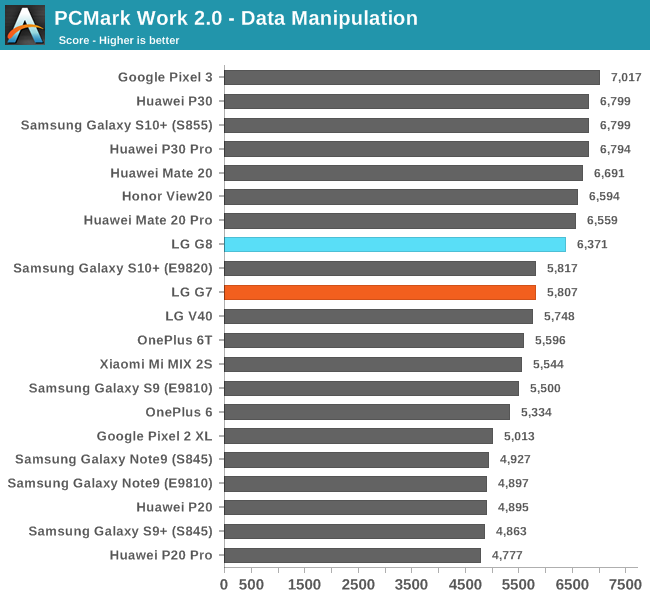 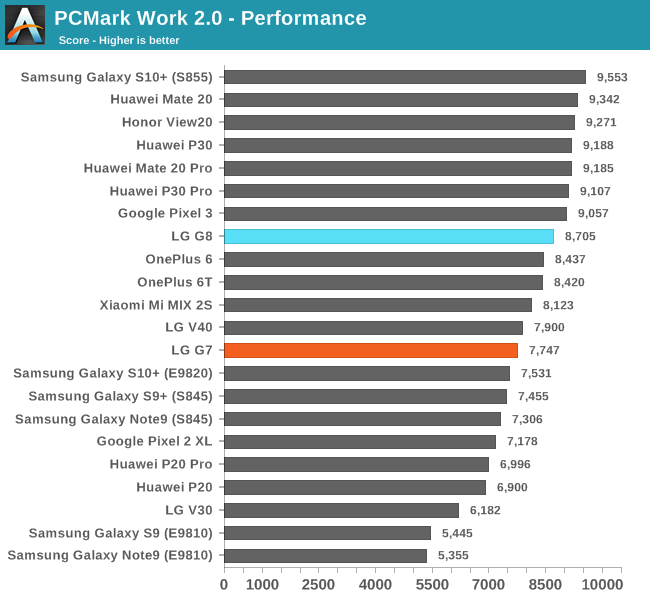 In the subsequent tests and final PCMark performance score we see the LG G8 lag behind the Galaxy S10, again scoring similarly to the QRD platform. 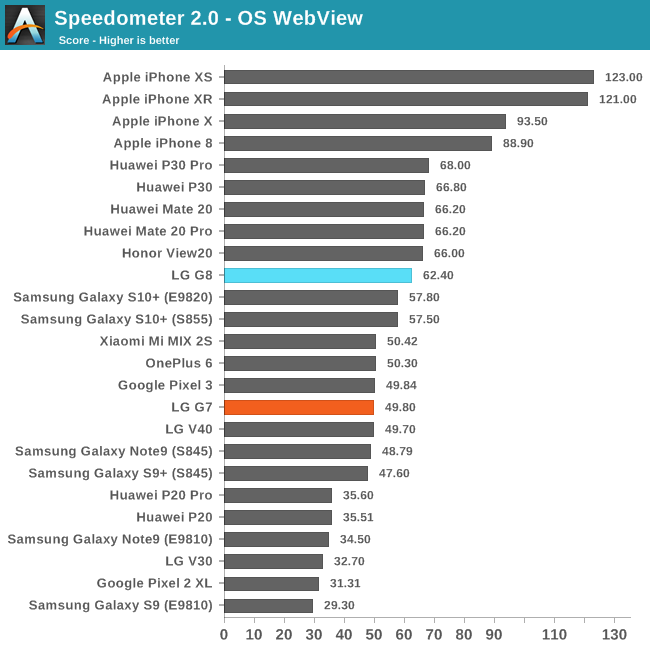 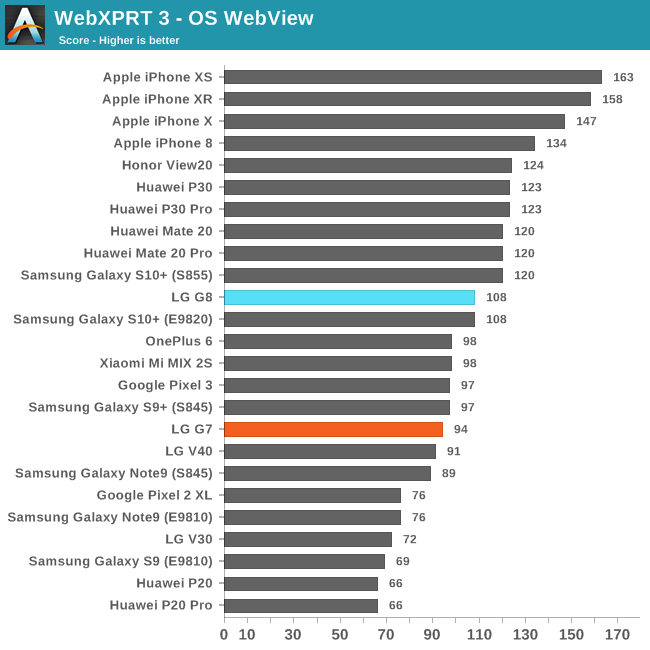 Since our review of the Galaxy S10 it seems Google has updated the system WebView to a newer version which has had a notable impact on performance, improving things by several performance points compared to a few months ago. We haven’t had the opportunity yet to update our database with the newest figures, which is why in some benchmarks the new G8 scores better than some previously reviewed devices.

In WebXPRT on the other hand we see the less aggressive scheduler settings overshadow the new WebView improvements, and the G8 again end up with worse performance than the Galaxy S10.

Overall, I’ve actually been quite disappointed with the performance of the G8, even though the benchmarks rank it relatively highly among Android phones. The core issue here I think is software as seemingly the G8 is lacking some of the framework boosters and more aggressive scheduler settings found in competing devices.

Where this is most noticeable is when switching between applications or something as simple as browsing different views in applications. Here the G8 is not only noticeable slower as the new Galaxy S10 in both SoC variants, but it’s also noticeably slower than many of last year’s Snapdragon 855 devices.

What is most shocking however is the fact that the G8 feels slower than the G7. In side-by-side comparisons between the two phones, the G8 is slower in opening a lot of applications or in-app views. This is extremely disappointing and clearly points out that LG has messed up somewhere in terms of the SoC’s BSP integration.

We hope LG will address this in the future with a firmware update, however users shouldn’t be holding their breath on the matter.