With three GPU options in the GE75 Raider there’s a wide range of performance available depending on the price range chosen. Being stuffed into a laptop also means each GPU won’t perform identically to their desktop counterparts which have significantly higher power draw, despite the similar naming and despite offering the same number of CUDA cores in the laptop variants. NVIDIA also offers Max-Q models for laptops which further limit the power draw to allow the GPUs to fit in even smaller laptops, but MSI is not leveraging the Max-Q for the 17.3-inch GE75 Raider. NVIDIA officially rates all of the mobile RTX lineup at an 80-Watt base power draw, with the RTX 2060 ramping up to 90 Watts, the 2070 up to 115 Watts, and the RTX 2080, which we have in our review unit, at 150 Watts and up.

Each of the GPUs also offer a generous amount of GDDR6 memory, with the RTX 2060 providing 6 GB and the 2070 and 2080 both featuring 8 GB, which is plenty for even the most demanding current generation title. They of course also support the RTX headline feature of hardware Ray Tracing support.

The one headline feature of an NVIDIA gaming laptop that the MSI GE75 Raider is missing is G-SYNC though, which is shame since it makes for a wonderful experience especially on a high-refresh laptop such as this.

To see how the GE75 Raider performs, it was run through our gaming laptop suite, which starts with a couple of synthetic tests and then adds in some real-world games. 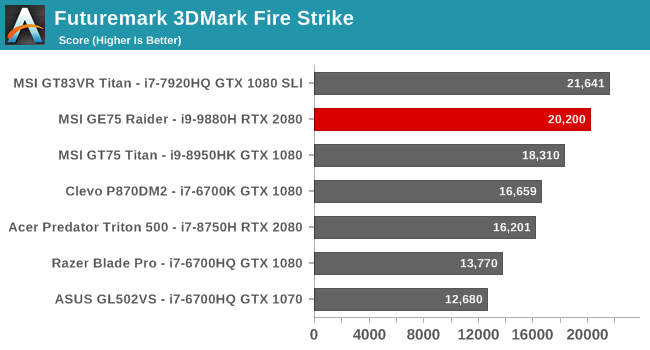 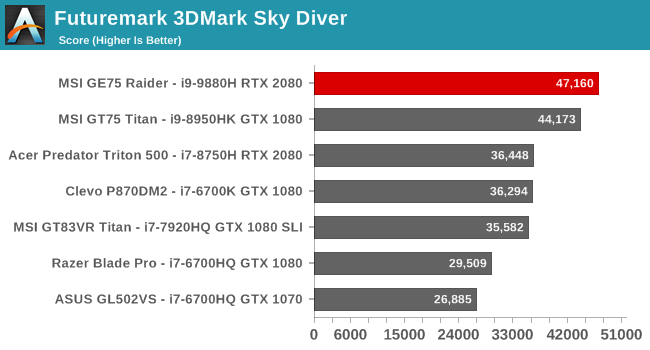 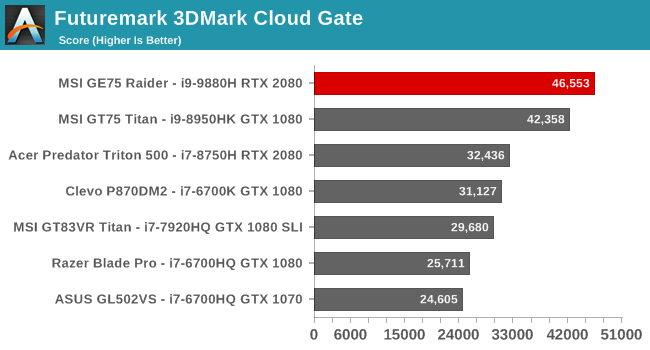 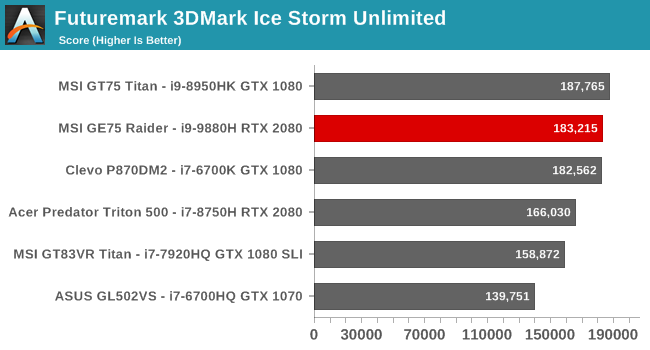 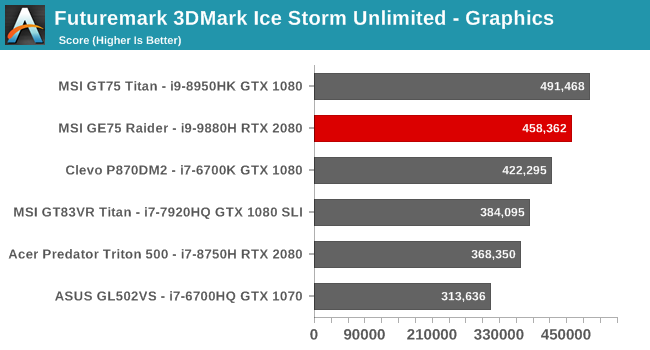 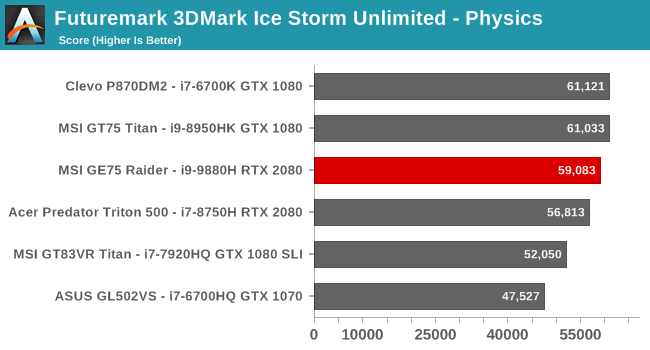 First up is UL’s 3DMark, which tests the GPU across a variety of different scene complexity, with Fire Strike being the most complex, and moving down to Ice Storm Unlimited which is a test that can be run on smartphones, and therefore more suitable to our integrated GPU devices, but there’s no harm in running a beast like this on there is there? Right off the bat we can see that MSI’s decision to not go with a Max-Q model on the GE75 Raider was a good decision for performance, with the Core i9 powered laptop’s powerful CPU dragging the hefty GPU to near the top of our results, and nearly surpassing the SLI GTX 1080 GT83VR Titan in Fire Strike. This is easily the fastest single-card laptop we’ve tested in Fire Strike so far.

Kishonti’s updated GFXBench offers DX12 support with the Aztec Ruins scenes, and as such we’ve dropped the older, less relevant, OpenGL tests and moved exclusively to the new DX12 test. As we saw in 3DMark, the GE75 Raider’s combination of faster CPU and less-throttled GPU propel it past the only other gaming laptop we’ve tested with the new suite. 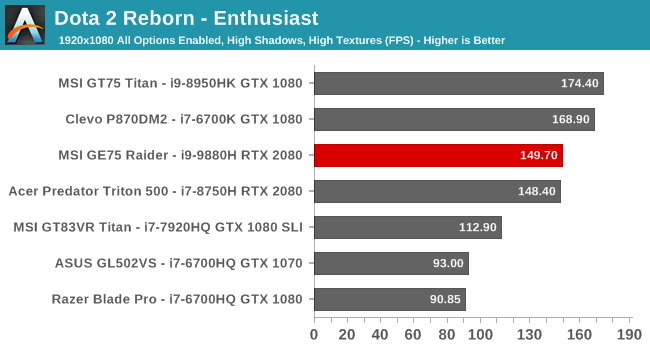 Valve’s incredibly popular Dota 2 is a fixture in our GPU suite because it is playable across a wide range of devices, although the game can get CPU limited because of the less demanding GPU requirements. Interestingly the RTX 2080 laptops both settle in slightly down on the best GTX 1080 devices we’ve tested, but there’s plenty of performance here so it’s not a huge issue. 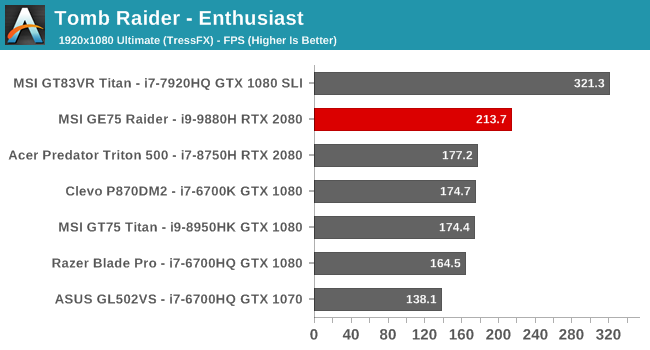 Although surpassed by the more recent titles in this series, the original Tomb Raider can still be a challenge for some gaming laptops. That’s not the case here though with the MSI GE75 providing the best performance yet for a single-card laptop we’ve tested.

Rise of the Tomb Raider 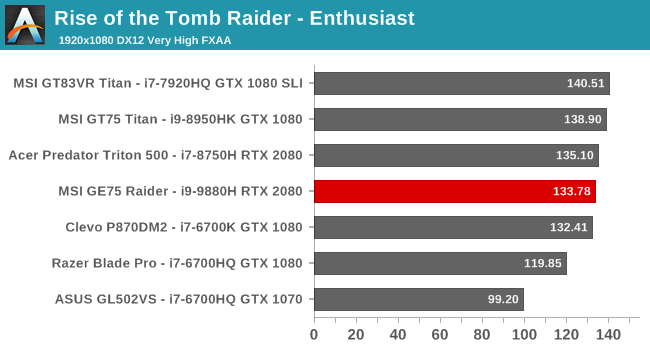 Offering some stunning graphics, the second installment for the latest Tomb Raider series is a visual delight. The MSI GE75 doesn’t quite hit the top of this chart, but it’s within a few FPS of doing so.

Shadow of the Tomb Raider

The latest installment in the Tomb Raider series bumps the graphical quality yet again, and is demanding enough that even at 1920x1080 no laptop we’ve tested yet can hit the native refresh of 144 Hz we’re seeing on many gaming laptops this generation. The MSI GE75 does pull out a sizeable margin here though. 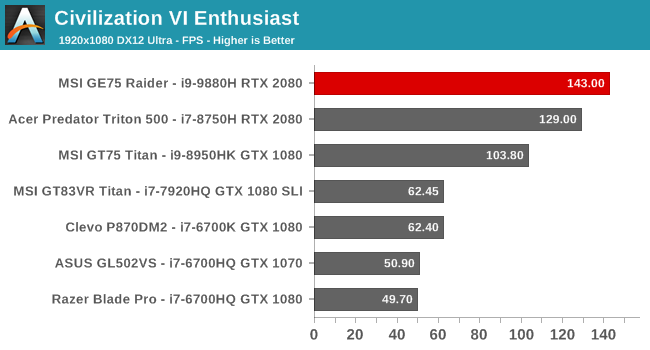 The latest installment in the Civilization series doesn’t require the kinds of high framerate as some of our other titles to be playable, but it can still be a demanding title in its own right. The GE75 Raider tops the chart again with a combination of powerful CPU and GPU. 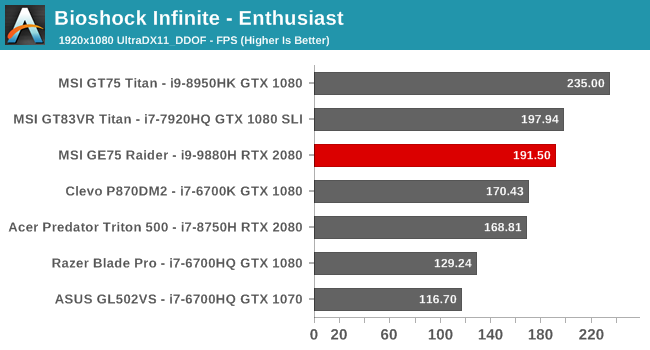 Bioshock is an older title that can still challenge gaming laptops with lesser GPUs, but the top end of the range has no issue with this title at all. 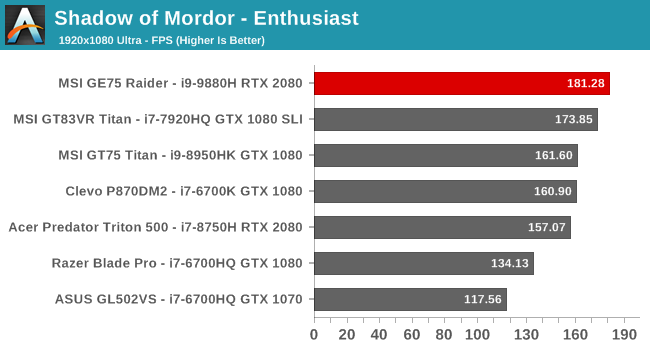 Once again we see the GE75 Raider jump to the top of the list in Shadow of War, with a sizeable gap to the other RTX laptop we’ve tested.

In the newer Shadow of War the graphical demands rise significantly, but the GE75 Raider keeps its spot at the top.

Ubisoft’s Far Cry series continues to deliver great looking games with unique storytelling. At our Enthusiast level settings, the tables have flipped now with the GE75 Raider a few FPS off of the others in this title.

Codemaster’s Ego engine is a staple in their racing game lineup and it continues to deliver great looking racing games. The engine can be CPU limited though, which helps explain the jump in performance seen with the GE75 Raider over its competition

Although the GE75 Raider doesn’t offer a UHD display option, it was connected to a UHD display to give a sense on how it performs at a resolution offering four times the pixels of the 1920x1080 display it ships with. 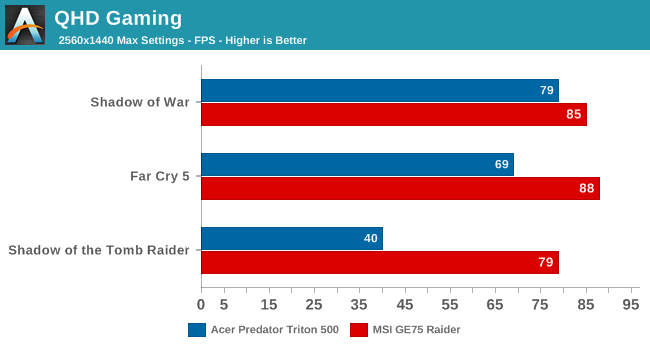 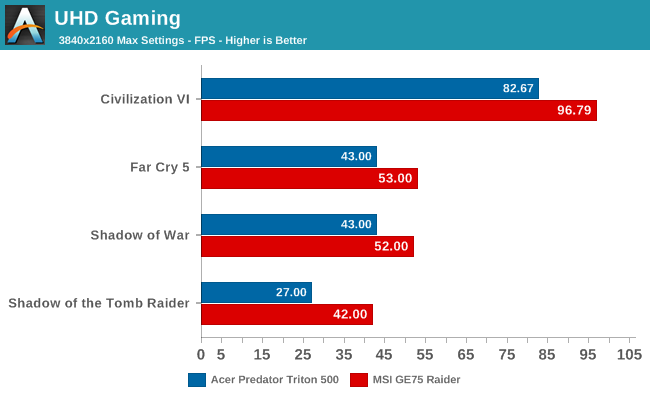 The MSI GE75 Raider pulls a commanding lead at higher resolutions. The additional thermal headroom in the GE75 Raider makes a huge difference. The UHD performance isn’t quite to the point where you can run any game at max settings though, although at QHD you certainly can.

Going with a standard RTX 2080 and not the Max-Q makes sense for the MSI GE75 Raider since it’s not a thin and light gaming laptop, and the extra thermal headroom, coupled with a powerful CPU, help keep this laptop at or near the top in most of our tests. Still, the RTX lineup hasn’t delivered the same generational leap in performance we’re accustomed to with new card launches, especially on the laptop side where power requirements are crucial to performance. Overall, the RTX 2080 is the fastest gaming laptop card at the moment, but not necessarily across all titles. For NVIDIA, the problem for them is the GTX 1080 was just so good.

If you’re after a new gaming laptop though, the RTX 2080 does offer great performance as well as the addition of hardware ray tracing support in games that offer that new feature. MSI has coupled it with a very fast CPU as well in the GE75 Raider.