One of the critical ways in which the Arm licensing model works relates to how its customers acquires Arm’s IP, the architecture licenses, or access, along with royalty payments. Every customer, especially the big ones on the leading edge, is different, and we’ve gone through how the Arm business model works in detail in a series of articles back in 2013. Today, Arm is taking a different step in how vendors can approach most of its popular IP for the simple task of design - without having to open the wallet to buy a license.

If a customer wants specific IP from Arm, say a Cortex M3 core, they have to first obtain a license to use it. Upon that license payment, the customer gets the required tools and support to implement that core in an SoC design, which is then fed to foundry for tapeout, and depending on the contract, each core or IP block that sells means that Arm gets a small royalty. This means that before a customer even looks into seeing if a specific core or IP block is suitable for the design, they have to buy the license for that design, even if it doesn’t ever end up in production. The per-core royalties, and licensing agreements, are typically done on a customer-by-customer basis depending on the size and scope of the company in question.

Arm’s new Flexible Access platform is designed to turn this paradigm on its head.

Under Arm Flexible Access, customers will pay a minor subscription fee to Arm’s toolset, and be able to design SoC cores that fall under the new schema without needing a license. Only at the point in which the SoC is pushed to the foundry for manufacturing and tapeout, or rapid prototyping in the silicon stage, will a license be needed.

This diagram shows how Flexible Access will work. This top bar shows Arm’s traditional IP licensing model, which is still in place for Arm’s high powered Cortex cores, whereby partners have to select which IP they need and license it before designing the chip.

With Flexible Access, the initial subscription fee is a fraction of the licensing cost, allowing companies that might not have considered Arm IP before to dive into SoC design without as much capital input as previously needed. Flexible Access partners will get access to either higher level models or direct RTL, allowing them to do accurate in-house simulation before that license fee is needed. 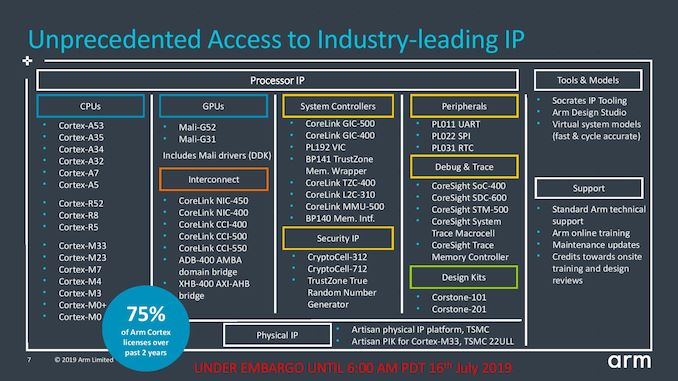 Flexible Access will cover up to 75% of Arm’s most recent IP over the last two years, and will span from Arm’s mid-range Cortex A series through the R and M-series cores, to interconnects and security IP such as CryptoCell, and even physical IP built for TSMC 22ULL process nodes. Arm stated to us in a call that this is very much an ‘alive’ project, with IP being added to the offerings over time. The company said that when new IP is created, it will initially be run under the traditional model with key partners, and as it moves into maturity the idea is to enable it through Flexible Access where 100s of customers can access it.

Worth noting on the list is the Arm Cortex-A34, which is a new core that has not been discussed previously. This is an AArch64 version of the A32.

With Flexible Access, Arm is targeting the mass market items, such as IoT, drones, cameras, and low-to-mid range consumer devices.

When asked about the higher performance markets, or even servers, Arm believes that the key customers in those segments are already comfortable with the licensing agreements in place as part of Arm's high-performance portfolio. The company states that the Flexible Access plan will enable Arm to ‘remain competitive and make the best of its competitive portfolio’ in the low-cost mass-market segments. The same argument was given when RISC-V was discussed as direct competition. 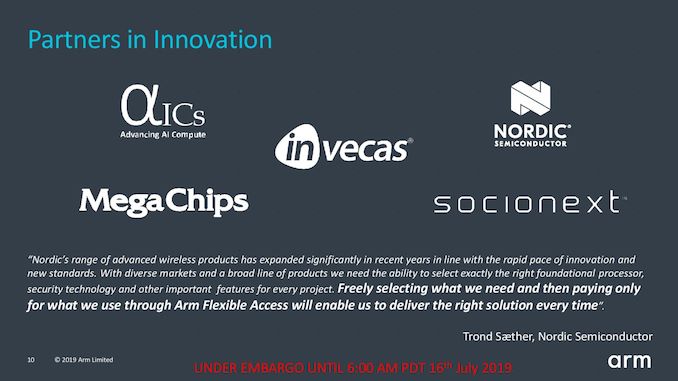 We did probe Arm about how a concept like Flexible Access came about. Arm stated that it has been approaching its customers, both big and small, for feedback on its productization strategy, and the comments that came back were remarkably consistent. The Flexible Access model, Arm says, is the results of those discussions combined with a new Arm portal for its customers. One of the benefits of simplifying the way its customers can access its offerings is apparently in the ease of contractual agreements (such as simplification and commonality between customers) as well as its back-end cost structure.

Ultimately Arm is giving out its RTL core designs to its customers at a fraction of the cost, before licensing. This can wave a red flag, however Arm believes that its customers are very honest with how they use its technology for when it comes down to creating silicon and generating license agreements.

The outcome of all of this, to Arm, is to enable a broader ecosystem by lowering the cost to play with the IP. In the previous IP model, customers would be licensing cores that they might not necessarily end up using, but had to at least test to see if it was relevant / hit the right performance or power node. With Flexible Access, Arm believes that its customers will be able to identify better which IP is best suited to each design without having to perform guesswork, and then only license the bits that are actually needed, ultimately lowering cost. For Arm’s shareholders, or technically Softbank’s shareholders, the counter argument to this is that Flexible Access should encourage more companies to work with Arm, ultimately diversifying the consumer base.

Arm Flexible Access has already been trialed with a handful of initial partners and from today is now open to the wider Arm audience.