Designed to offer high bandwidth and low latency for connections between processors, co-processors/accelerators, and memory/fast storage, Gen-Z 1.0 uses a PCIe physical layer and a modified IEEE 802.3 Ethernet electrical layer standards to provide per-lane speeds of up to the 56 GigaTransfers/second. The Gen-Z 1.0 physical layer specification only defined usage of PCIe Gen 1-4 protocols as well as a 25 GT/s PHY. Thus, to take advantage of all the capabilities of the Gen-Z 1.0 core specification, one needs to comply with the Gen-Z PHY that describes logical, functional, electrical, and channel characteristics for various PHY layers.

The Gen-Z Physical Layer Specification 1.1 defines how to implement a Gen-Z layer capable of operating at PCIe Gen 5 32 GT/s per lane speeds. Revision 1.1 also outlines how to implement a medium to reach a Gen-Z-E-PAM4-50G-Fabric link with a raw data rate of 53.125 GT/s per lane using a 4-level Pulse Amplitude Modulation (PAM4) signaling over the fabric with an ultra-low-latency Phit Forward Error Correction (Phit FEC) encoding using a BCH codeword. Finally, the specification 1.1 describes the implementation of a very short reach Gen-Z-E-PAM4-50G-Local link at 53.125 GT/s per lane using a PAM4 signaling with Forward Error Correction (raw data-rate of 47.222 GT/s). 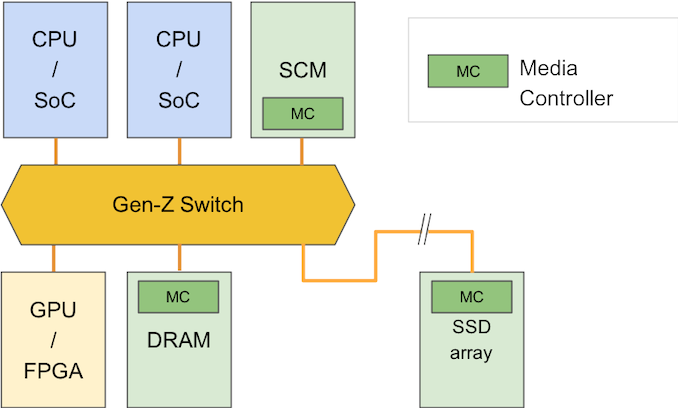