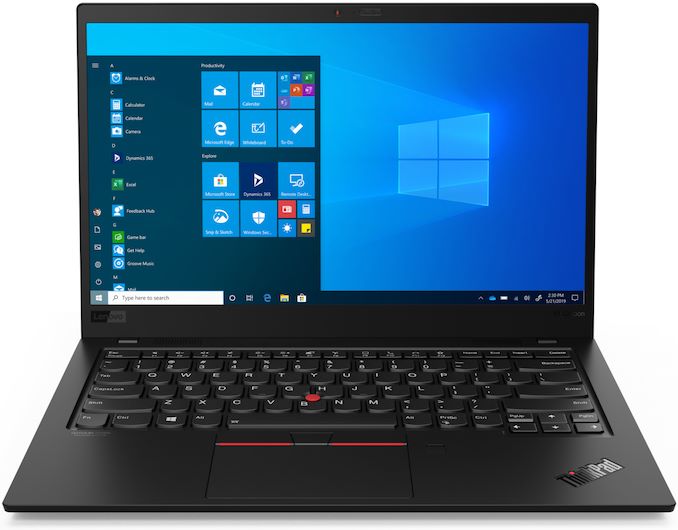 Lenovo’s ThinkPad X1 Carbon and ThinkPad X1 Yoga are perhaps the company’s best known laptops in the west. The company puts tremendous amounts of effort to make its flagship PCs stand out from the crowd in terms of features and performance, which is why it typically introduces updated versions every CES. This year is not an exception, so Lenovo is rolling out its 8th Generation ThinkPad X1 Carbon as well as 5th Generation ThinkPad X1 Yoga, which are receiving a new keyboard, additional security features, and Wi-Fi 6 support.

The upcoming Lenovo ThinkPad X1 Carbon and Lenovo X1 Yoga will borrow a lot from their direct predecessors, the 7th Gen ThinkPad X1 Carbon and the 4th Gen ThinkPad X1 Yoga. The systems share chassis and therefore retain weight and thickness of previous-generation models (1.09 kilograms/14.9 mm and 1.3 kilograms/15.25 mm, respectively). Furthermore, they are based on the same Intel’s 10th Generation Core processor platform (Comet Lake) with up to six cores that is paired with up to 16 GB of soldered-down LPDDR3 memory as well as an up to 2 TB SSD.

Instead, Lenovo had made three major improvements elsewhere to differentiate the new ThinkPad X1 Carbon and Lenovo X1 Yoga systems from their predecessors. The first one is the new keyboard that still uses scissor mechanism, but now has a set of buttons for instant Voice-over-IP access. Considering that services like Skype are used widely these days, the special buttons will make life of many people easier.

The second improvement for the new ThinkPads is Wi-Fi 6 support, with the latest Wi-Fi standard starting to gain serious traction.

The final new feature that will be optionally available on select 8th Generation ThinkPad X1 Carbon as well as 5th Generation ThinkPad X1 Yoga is a new Full-HD display with 500 nits maximum brightness. The new display is also available with Lenovo’s PrivacyGuard screen filter, which helps to protect against prying eyes by giving the screen a narrow viewing angle. In addition, select machines will come with ThinkPad PrivacyAlert software technology that warns users when someone is staring at their screen and turns on PrivacyGuard on supporting LCDs. Meanwhile, flagship models of both mobile PCs will come equipped with an Ultra-HD display featuring 500 nits luminance and Dolby Vision support. 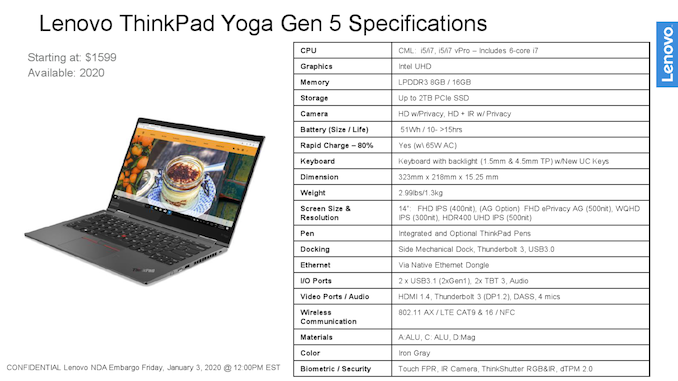 Rounding out the package, the new ThinkPads use a 51 Wh battery that offers 10 – 15 hours (Yoga) or 10 – 18 hours (Carbon) of battery life depending on exact configuration. Furthermore the ThinkPad X1 Carbon is once again part of Intel’s Project Athena program, meaning it meets Intel's performance and battery life standards there.