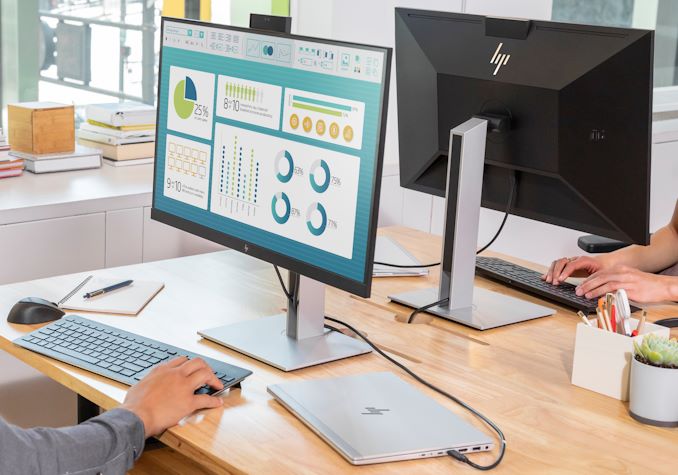 HP’s E24D G4 and E27D G4 advanced docking monitors use IPS panels with diagonals of 23.8-inches and 27-inches, offering Full-HD (1920×1080) and Quad-HD (2560×1440) resolutions respectively. The displays offer 250 or 300 nits brightness, a 1000:1 contrast ratio, a 5 ms GtG response time, and a 60 Hz or 75 Hz refresh rate. Both monitors have very thin bezels to simplify usage of multi-display configurations. Exact specifications of the LCDs are in the table below.

As their names suggest, the key selling points of the E24D G4 and E27D G4 monitors are their advanced docking capabilities that include a GbE port, a pop-up webcam, DisplayPort input and output to daisy chain another LCD, a quad-port USB 3.0 hub, and 100 W USB-C Power Delivery. In a bid to comply with requirements of corporate and business customers, HP enabled numerous network manageability features, including OCI, eTag, MAC address passthrough, PXE boot, WoL, and LAN/WLAN switching.

Since the monitors are designed for offices where space is limited, they naturally come with an adjustable stand that can regulate height, tilt, and swivel. Also, the displays can work in portrait modes. 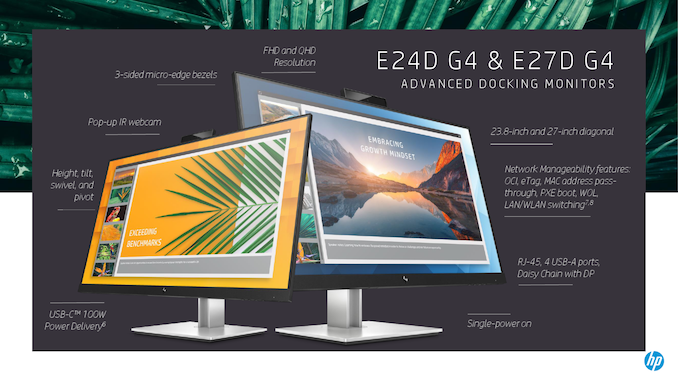 HP’s E24D G4 and E27D G4 displays will be available directly from the company later this month for $349 and $479, respectively.